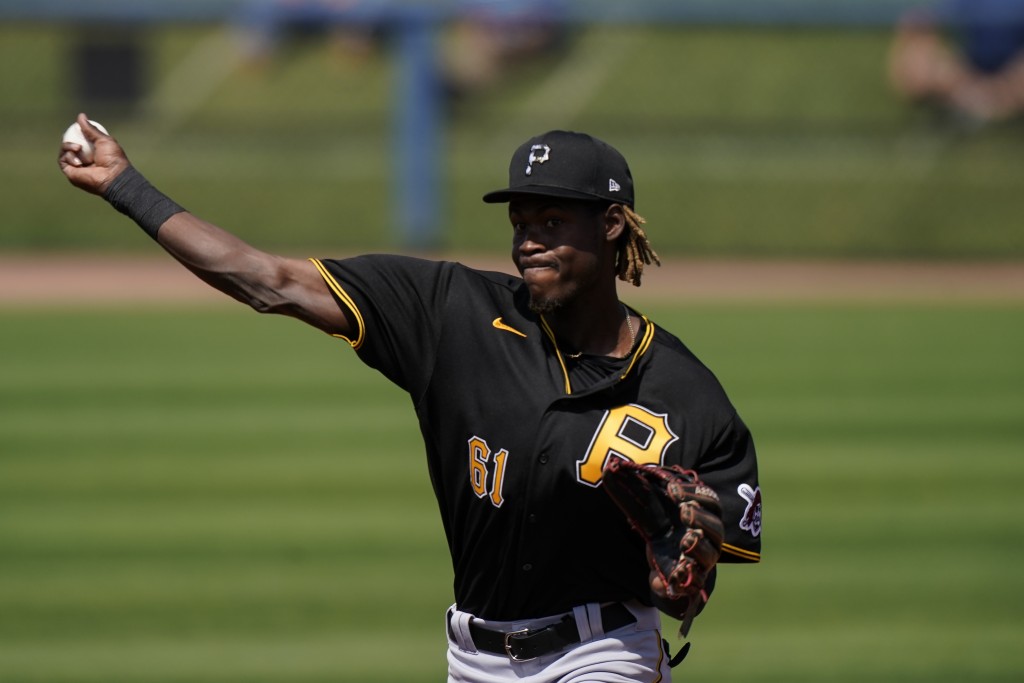 The Dominican Republic native was 6-foot-1 or so 16-year-old when the Pittsburgh Pirates signed him. The tools — particularly the power and arm strength — were evident. So was the potential.

That potential has only grown over the last half-decade plus. So too, however, has Cruz's frame. The 22-year-old has stretched out to 6 feet, 7 inches during his slow steady rise through Pittsburgh's system. And as much as he'd love to follow in the footsteps of the late Tony Fernandez and play shortstop in the big leagues, his body might not give him the chance.

Fernandez, a five-time All-Star and a four-time Gold Glover winner during his 17 seasons, dazzled at the position at 6 feet, 2 inches. Cruz blew past that number long ago.

“To this day I’m still praying that I stop growing,” Cruz said with a smile on Thursday.

It might already be too late. While teams are becoming increasingly more comfortable with keeping taller prospects at short — San Diego's, Fernando Tatis Jr., Corey Seager of the Los Angeles Dodgers and Houston's Carlos Correa are all 6 feet, 4 inches — Cruz might already be too far gone.

Though the Pirates have insisted their long-range plans include giving Cruz every opportunity at shortstop, they are hedging their bets of late. He is beginning to see some time in the outfield, following a path they took last season with Cole Tucker, who came up through the ranks at shortstop but found himself manning both right field and center field at the major-league level in 2020. Cruz began preparing himself during Winter League back in the Dominican Republic, and Pittsburgh's staff told Cruz to get ready to switch up gloves this spring as an experiment of sorts.

“I’m just an athlete and a player that I never want to be caught by surprise,” Cruz said. “So from the first moment that I started to hear conversations and comments about that, I began to quicken myself and preparing myself so that whenever that opportunity does arrive, I’m not only mentally equipped but I’m also physically equipped for the opportunity.”

It's an opportunity Cruz considers himself lucky to have. His career entered a crossroads last September when the SUV he was driving collided with a motorcycle, killing three people. He was arrested and the district attorney said Cruz had ingested an unspecified amount of alcohol. Cruz, however, was not administered a test of any kind and the Pirates contend the assertion alcohol was involved is not true.

While Cruz declined to talk about the accident and the status of the case, he was cleared to return to the United States and said he is currently “at peace.”

Cruz admits he's relishing the chance to use his massive wingspan to rob a potential home run or two during his side gig in the outfield but stressed he remains very much set on playing his favorite position.

“I still see myself as a shortstop,” Cruz said. “No one is going to move me out of there.”

Cruz spoke with the self-confidence required to play professional baseball and even though the team continues to trot him out to different spots, Cruz might not be wrong in his assessment.

“I think every guy who’s ever played shortstop thinks that way,” second-year Pittsburgh manager Derek Shelton said. “I have no problem with that. I actually think it’s a great comment. We view him as a shortstop. We think he can play shortstop. His work has continued to be good there and he’s played well in games.”

Finding enthusiasm to tackle a new position while remaining adamant about holding onto his primary one is a fine line to walk. How Cruz develops at the plate and whether the log jam ahead of him at shortstop at the major league level — where Kevin Newman, Erik Gonzalez and Tucker are all currently fighting for playing time — will have a say in whichever way Cruz goes.

His power is obvious. Cruz's batting practice sessions are often filled with fireworks and he hit a respectable .298 in 2019 while playing at three different minor-league levels. He spent 2020 at the team's satellite camp in Altoona, Pennsylvania, which he called “great” considering the alternative was not playing at all.

“There was just something special about being together as brothers, sharpening each other, pushing each other and challenging one another” Cruz said. “It was a season filled with ‘iron sharpens iron.'”

NOTES: The Pirates and PNC Bank reached an agreement on a 10-year extension on their naming rights deal that will keep the Pittsburgh-based financial institution as the title sponsor at PNC Park. The 20-year agreement between the two sides was set to expire at the end of the 2021 season.