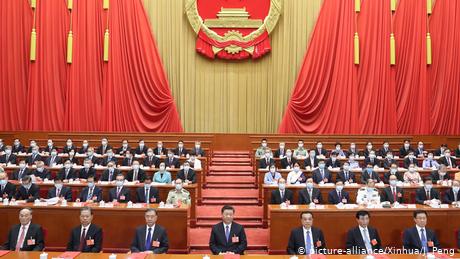 The National People's Congress, China's annual parliamentary event, opens on Friday, March 5, in Beijing. For the second straight year, it will be a mostly virtual event due to the COVID pandemic.

Although the NPC is China's main legislature, the Communist Party ensures that important decisions are made long before any proposals reach the body.

The party sometimes uses the NPC to reveal major policy and personnel changes.

The outlook for the economy and Hong Kong's future, among others, will be under discussion at the gathering that lasts 10 to 14 days.

This year, the party is unlikely to set concrete growth targets for the Chinese economy, observers say.

China was able to get the pandemic under control relatively early and more effectively than most other countries, ensuring a quick economic recovery. Still, the health crisis' negative impact on the global economy and the continuing trade dispute with the US mean Chinese firms face a lot of uncertainty.

This issue has long preoccupied Beijing, said Caroline Meinhardt, a research associate at the Berlin-based China research institute MERICS. But following this strategy means the government faces a challenge in the long run, she added. "Significantly strengthening demand-led growth would require a significant redistribution of income to ordinary households," the expert told DW.

Her colleague at MERICS, Nis Grünberg, adds, "The focus in the coming years will be on strengthening the country's own economy and industry, and expanding social systems, especially in health and education."

Another area of focus is boosting domestic innovation and investment in future technologies.

The trade row with the US has highlighted China's vulnerabilities, particularly with regard to its heavy reliance on global suppliers for high-tech components such as semiconductors.

"At the moment, China is still far from becoming technologically independent," Meinhardt said. "Thanks to enormous government support and private investment, China is likely to produce significant achievements in some sub-sectors in the coming years," she noted.

"But how independent China can actually become depends, among other things, on whether and how US export controls are tightened, and Chinese companies can close their existing knowhow gaps without access to foreign technologies."

Once again, the NPC is likely to celebrate China's victory in the fight against poverty, a win that was already announced at the end of 2020.

Officially, all municipalities across the country were able to lift their populations out of absolute poverty.

The Chinese government views any household earning less than 4,000 yuan per year or eleven yuan ($1.70) per day as poor. It is slightly lower than the World Bank's threshold of $1.90.

As planned, the victory over poverty comes in the 100th year of the founding of the Chinese Communist Party in 1921.

"However, the task now is to raise the hundreds of millions of Chinese living in precarious economic and employment conditions to a middle-class standard of living, and to combat growing inequality," said Grünberg. "More investment in education and the creation of jobs, also outside urban centers, will be necessary to maintain the standard achieved."

Wu Qiang, a Beijing-based political analyst, shares a similar view. Looking ahead to the five-year plan, he said, it will be about "managing the balance of power between the central government and the provinces, regulating the distribution of resources, and balancing the regional discrepancies in economic development."

Transforming the Chinese economy to turn it into a "green economy" or a carbon-neutral one, is high on the list of priorities of the leadership in Beijing. The far-reaching goals of the party leadership are, however, sometimes at odds with priorities in the provinces, where new coal-fired power plants are still being connected to the grid.

According to a recent directive from the State Council, China's targeted "green transformation" in the manufacturing, transportation and consumption sectors is expected to have taken "initial shape" by 2025.

And by 2035, the scope of "green industry" should have reached a whole new level, with all energy-intensive and polluting industries - from steel to paper production - required to switch to "green" production methods by then.

The China experts at MERICS cite three reasons why the planned "greening" of China should be taken seriously: First, the communist party leadership sees its power and legitimacy guaranteed in the long term only with a sustainable economy and healthy environment. Second, the trade conflict with the US has made the leadership aware of the need for an efficient and sustainable energy and food supply from its own sources. Third, the massive investment in green production and consumption offers China the prospect of technological world leadership.

Climate policy is the only area where President Xi Jinping can currently win friends and allies on the international stage, especially in the West.

Beijing's actions in Hong Kong and places like Xinjiang have drawn sharp criticism from the EU and the US.

In June 2020, the NPC Standing Committee passed the so-called National Security Law for Hong Kong. Since then, a number of pro-democracy politicians and activists have been brought to trial on charges of violating one or more of its far-reaching provisions.

Still, it seems Beijing wants to further tighten its grip on the financial hub. Xia Baolong, director of the State Council Office for Hong Kong and Macao Affairs, recently stressed that Hong Kong must be ruled by "patriots."

Observers like Wu Qiang suspect that an overhaul of the election law is on the way.

"The defeat of the pro-Beijing camp in the November 2019 district council elections had shocked the Chinese leadership. Since then, they have been trying to prevent results unfavorable to Beijing by intervening in Hong Kong's electoral system."

Pointing to the COVID pandemic, authorities postponed elections to the Hong Kong Legislative Council by more than a year. They are now expected to take place by December 2021. Several opposition lawmakers have already had their mandates revoked because of their anti-government criticism and activities.

In the shadow of COVID pandemic

China has been able to keep the number of new coronavirus infections at a manageable level by rigorously implementing contact-tracing, isolation and quarantine measures.

For most Chinese, the health crisis seems to be long over. However, Beijing-based expert Wu Qiang said the pandemic remains a challenge for the Chinese leadership.

"It remains a major issue. In recent weeks, controls on access roads to Beijing have been tightened again in preparation for the NPC meeting. The additional protective measures for delegates show that there is great fear of a new outbreak."

The nearly 3,000 delegates must each undergo several PCR tests before traveling to Beijing and during their stay, and their body temperature is measured daily. They are practically only allowed to stay in the hotel and in the Great Hall of the People, the meeting venue. COVID vaccination has been "recommended" for all of them.

The article was translated from German.