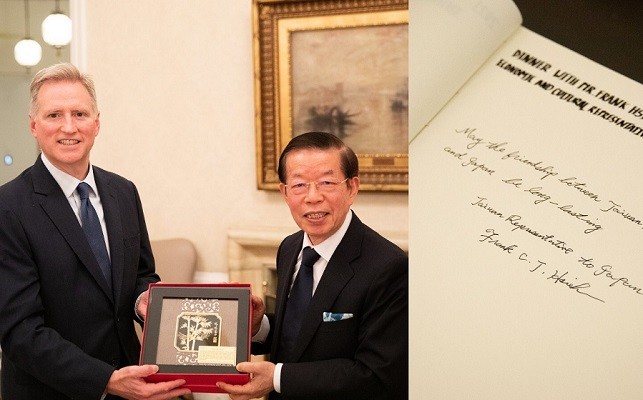 TAIPEI (Taiwan News) — The Taiwanese representative to Japan officially met with his American counterpart in the archipelago country for the first time since the U.S. ended official diplomatic ties with Taiwan 42 years ago.

Taiwan's de facto embassy in Japan on Thursday (March 4) posted on Facebook that the American embassy's Charge d’Affaires ad interim Joseph M. Young had invited Frank Hsieh (謝長廷) to dinner at his residence Tuesday (March 2). The two shared their views on topics of common concern, according to the post.

Young tweeted Thursday that he and Hsieh had exchanged views on "shared priorities across a wide range of topics, including our vision for regional stability, economic prosperity, and stronger people-to-people ties."

The meeting was the first to officially take place between the two nations' top envoys in Japan since Washington swapped diplomatic ties with Taipei for Beijing in 1979.

During the waning days of the Trump administration in January, former American Secretary of State Mike Pompeo announced he was ending restrictions on interactions between U.S. and Taiwan officials that had been implemented following the diplomatic switch, calling them "an attempt to appease the Communist regime in Beijing."

While many analysts expect U.S. President Joe Biden to adopt a less combative tone on China than his predecessor Donald Trump, Biden has been outspoken in his support for Taiwan. Meanwhile, his administration has given no indication it will reinstate the guidelines, with the American and Taiwanese representatives to the World Trade Organization meeting at the Taiwan mission just last week.

This week, I welcomed @taiwan_in_japan’s Frank Hsieh to the Ambassador's Residence to discuss our shared priorities across a wide range of topics, including our vision for regional stability, economic prosperity, and stronger people-to-people ties. pic.twitter.com/hlS4FAMIa2