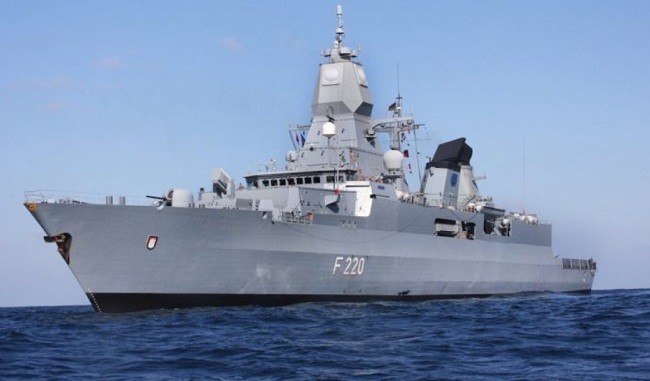 TAIPEI (Taiwan News) — A German frigate will sail through the South China Sea this summer for the first time since 2002, German officials confirmed Tuesday (March 1).

Officials in the country's defense and foreign ministries told Reuters that the frigate, scheduled to embark on a trip to Asia in August, will traverse the South China Sea on the return leg of its journey.

The voyage will mark the first time in 19 years that a German warship has passed through the contested area and is being viewed as a "freedom of navigation" operation. China claims much of the South China Sea, where it has built and militarized artificial islands, as its own and has overlapping claims with Vietnam, the Philippines, Malaysia, Indonesia, Brunei, and Taiwan.

German officials emphasized Tuesday that the frigate will stay outside the "12-nautical-mile" point that marks what claimants assert to be their territorial waters.

Japanese Defense Minister Kishi Nobuo in December invited Germany to send a naval vessel to join Japan's Self-Defense Forces in drills. He also said that charting a route through the South China Sea would aid international efforts to maintain the right of transit amid China's aggressive expansion.

The news follows recent similar passages by the U.S. and French navies as the Biden administration calls for a multilateral front against Chinese assertiveness in the region. The U.K., Australia, and Japan are reportedly planning Pacific exercises that could also bring them into the sea later this year.

Chinese Communist Party tabloid the Global Times last week accused the U.S. of "attempting to contain China by rallying its Western allies to the South China Sea" and declared the increased naval presence of these countries to be futile. "Nevertheless, the [People's Liberation Army] will be prepared," it said.