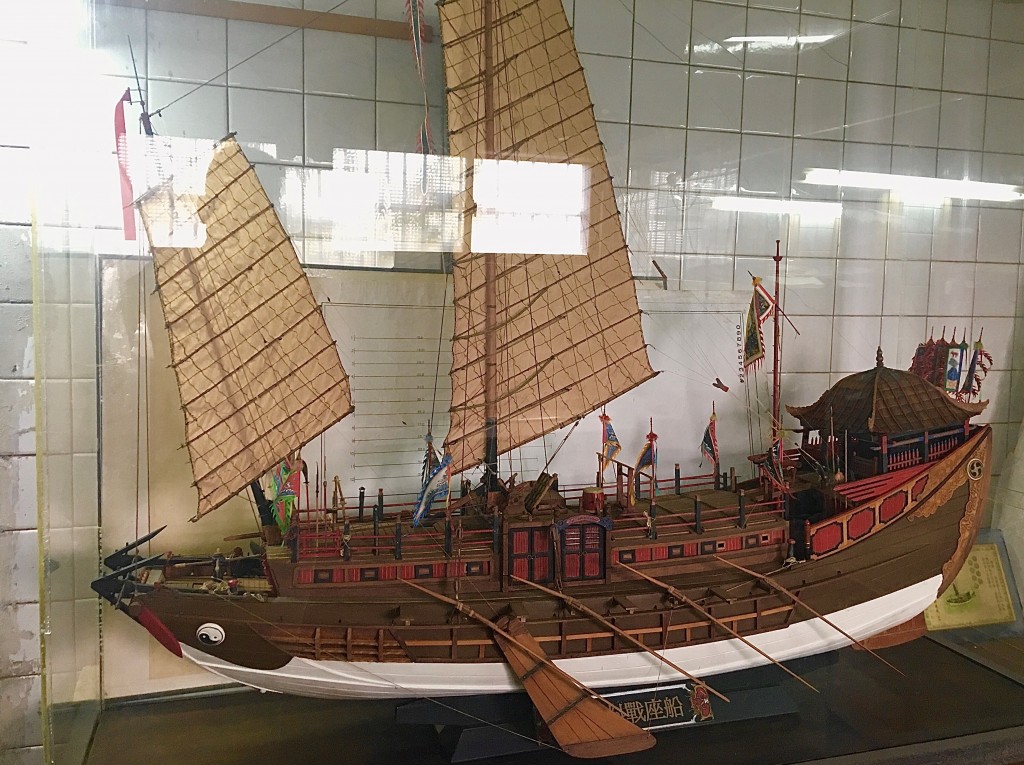 TAIPEI (Taiwan News) — Taiwan’s foremost expert on traditional Ming (1368-1644) and Qing dynasty (1644-1912) ships recently shared the story of the “Free China” (自由中國號) junk with Taiwan News and discussed some of the unique features of 16th and 17th-century Chinese ships, which made them superior to European-style vessels of the same era.

Tseng Shu-ming (曾樹銘), a life-long resident of Keelung City, is a master model shipbuilder and the nation’s most knowledgeable person on traditional Chinese shipbuilding and maritime history. He told Taiwan News on Sunday (Feb. 28) that he has been obsessed with model making since he could wield a pair of scissors.

During his childhood, he often observed ships coming and going at Keelung Harbor, which ignited his passion for seafaring vessels. Tseng reasoned that since Taiwan is an island country, it should highlight its connection with the sea. Thus, he has taken it upon himself to promote maritime culture.

One significant event in Taiwan’s marine history was the voyage of the “Free China” junk, Tseng pointed out. He explained that in the early 1950s, Paul Chou (周傳鈞), Hu Loo-chi (胡露奇), Marco Yu-lin Chung (种玉麟), Reno Chia-lin Chen (陳家琳), and Benny Chia-cheng Hsu (徐家政) were looking for a way to leave Taiwan — which was under martial law at the time.

That opportunity finally came when Chou saw a newspaper article announcing plans for a trans-Atlantic yacht race co-sponsored by the New York Yacht Club, the Royal Swedish Yacht Club, and the Royal Yacht Club of Gothenburg. The competition, the first of its kind since 1935, was to take place on June 11, 1955, in Newport, Rhode Island, and finish in Gothenburg, Sweden.

The group quickly contacted the sponsors and asked if a Taiwan team could participate. The sponsors told them they were welcome to do so. Upon hearing this news, the next challenge was to find a boat that could brave the strong winds and merciless waves.

The five men traveled around northern Taiwan and to the outer lying island of Matsu, asking locals if they knew of any sailboats for sale, Tseng said. Though they searched tirelessly they eventually returned to Keelung empty-handed.

However, on the docks at Keelung Harbor, they spotted an old Chinese junk moored on the other side of the harbor. The men rushed over and asked the harbor authorities about the vessel.

Tseng said the junk, built in Fujian, China, circa 1890, was originally a traditional fishing boat that was later used to smuggle goods into China after the Chinese Civil War. The boat’s operator had been caught and the vessel was then taken to the harbor.

The group purchased the boat but needed financial support to start repair work, as it was already more than 50 years old. The mayor of Keelung at the time, Hsieh Kuan-I (謝貫一), caught wind of the young men’s transoceanic endeavor and offered them US$500 on the condition they name the boat “The Keelung.” However, the mayor reneged on the offer not long after.

Tseng said that, fortunately, the then provincial governor, Yen Chia-kan (嚴家淦), was willing to sponsor the trip on behalf of the government but requested the boat be named “Free China.” The crew accepted the offer without hesitation.

The men then applied for visas to enter the U.S. Meanwhile, Calvin Mehlert, a young diplomat stationed in Taiwan at the time, heard they were planning to sail to America and was interested in joining them — even going onboard the junk to inspect the living quarters.

After some deliberation, they decided to allow him to tag along, Tseng stated. The men planned to first cross the Pacific and get to San Francisco, and then head south to cross the Panama Canal in order to arrive in Rhode Island for the yacht race.

Finally, on April 4, 1955, everything was ready and Free China, along with its six-man crew, was pulled out of Keelung Harbor by tugboats, with much fanfare. The junk spent two days at sea, without covering much distance.

Tseng admitted none of the men had much sailing experience and they had to return to Keelung for repairs on April 6. The expedition soon resumed and by April 17, the men reached the Diaoyutai Islands. They slowly made their way to Japan where they stopped to replenish supplies and repair the boat.

Finally, 114 days later, the crew arrived in San Francisco, California, on Aug. 8. Though the crew missed the yacht competition that was the impetus for their voyage, their trans-pacific journey in a traditional junk was a feat in and of itself and made headlines around the world.

The young men donated the boat to a U.S. museum, but it was later sold to successive private parties over many decades, finally ending up at the Bethel Island Boatyard in Sacramento, California.

Upon rediscovery of its existence and location, family members of the original crew living in the U.S. launched a campaign to save the ship. Tseng said when he first heard of the campaign, he immediately issued an appeal to then Premier Liu Chao-shiuan (劉兆玄) to bring the vessel back home.

After much effort, the Free China was shipped back to Taiwan, in 2012, and has been placed on display at the National Taiwan Ocean University in Keelung City ever since.

In addition to sharing the story of such an epic maritime feat, Tseng pointed out several features of traditional Chinese sailboats that made them superior to their Western counterparts.

Firstly, is the placement of the sails, Tseng said. Whereas European ships were square-rigged vessels, Chinese ones were fore-and-aft rigged, which allowed more agility.

Tseng added the sails could turn into the direction of the wind with ease. He stated that as they were parallel with the keel, even if they were holed, they could still function.

Another notable feature, the ship expert highlighted, was that compartments below-deck were separated by boards, allowing the vessel to float even if other compartments were taking on water.

The shape of the vessel body mimics waterfowl, Tseng said, with its widest section closer to its rear end. This helps improve the boat's buoyancy, he stated. He added the ends of ships usually taper, resulting in less drag on the water.

Tseng also mentioned that some Chinese rudders were fenestrated with small rectangular holes, and usually extended in front and behind the axis of rotation, allowing for tighter turns. The fact that the rudder extends past the hull also allows it to act like a daggerboard, thus increasing the stability of the ship.

In addition to a traditional rudder at the rear of the ship, Tseng said the Chinese invented leeboards, which are fish-fin-shaped boards placed on both sides of a boat to stabilize it and prevent it from drifting off course. This addition was so useful and effective that the Dutch, who traded heavily between China, Taiwan, and Indonesia in the 17th century, adopted this and placed them on their own ships.

Tseng said that many 16th and 17th-century Chinese boats were so versatile they could alternate between acting as a merchant vessel or a warship. If a ship was needed for battle, soldiers would be taken aboard. Cannons were usually in place no matter a ship’s mission, as pirates were a real threat for merchants and traders in the days of yore.

Tseng has constructed many model ships over the years and his works can be seen in museums all over Taiwan, including the National Palace Museum, the Evergreen Maritime Museum in Taipei, and the National Museum of Natural Science in Taichung. Furthermore, he has been a consultant to traditional shipbuilding projects around the nation. In 2015, he came up with the design for the restoration of a replica Ming dynasty wooden junk from the era of Koxinga.

Tseng is also a member of the Keelung Culture and History Association.