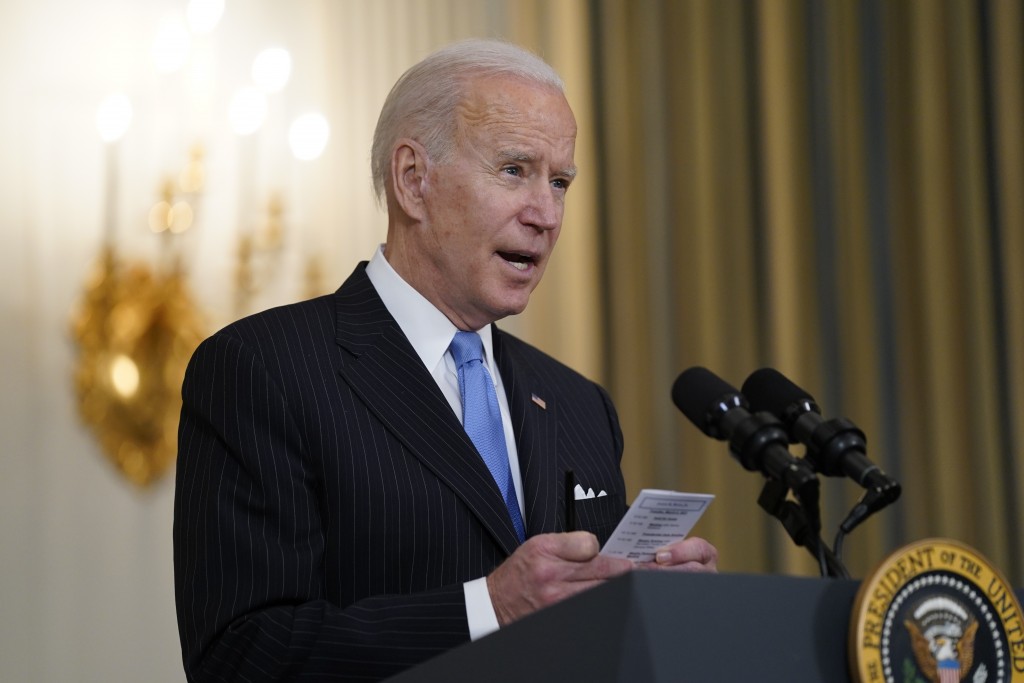 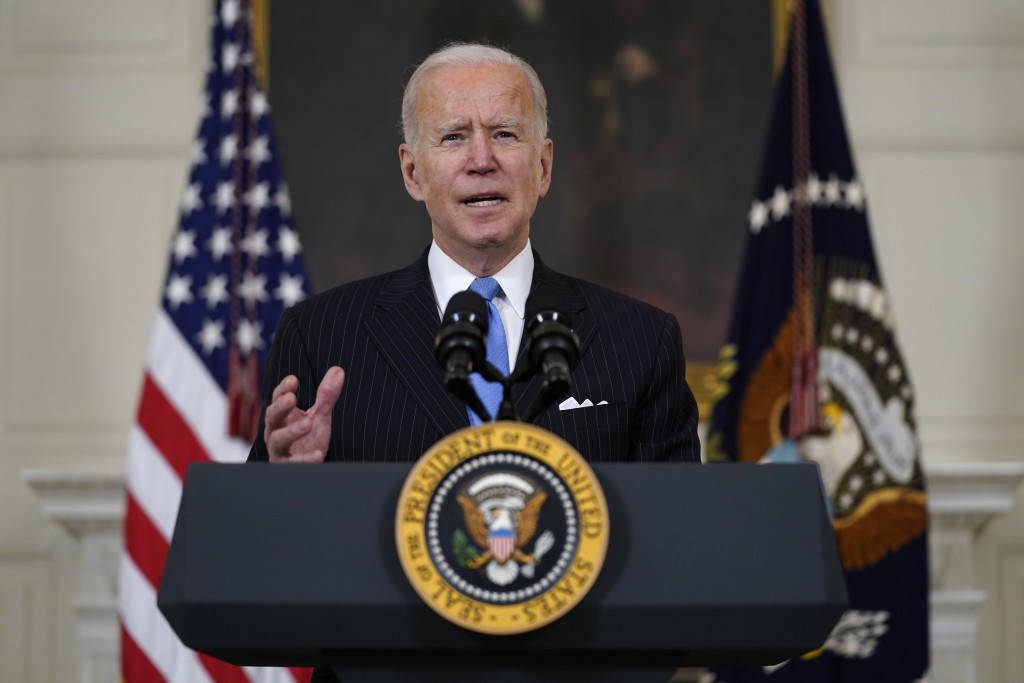 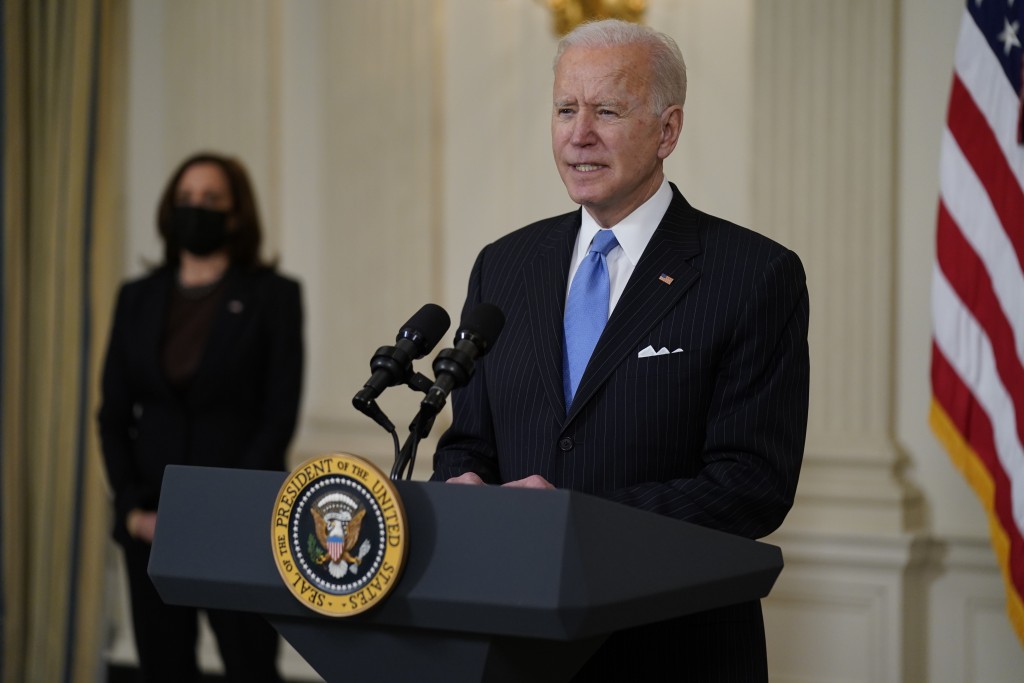 WASHINGTON (AP) — President Joe Biden doesn’t just have to manage the coronavirus pandemic, he also has to manage people’s expectations for how soon the country will come out of it.

And on the latter task, projecting too much optimism can be as risky as offering too little, requiring what one public health expert calls a “necessarily mixed message.”

At every turn, as the Biden administration works to inoculate every adult American, the president is tempering bullish proclamations about the nation’s vaccine supply with warnings about the challenges ahead.

His big announcement Tuesday that there would enough vaccine for all adults by the end of May, two months earlier than previous predictions, came with a chaser from Biden that it could be a full year before the nation gets back to normal.

But even then, his pledge skated over the idea that while the administration expects to have procured enough vaccine by the end of the May, there is no guarantee that all those shots will get into arms by then.

The Biden administration has been moving to scale up capacity to administer vaccines at an ever-faster clip. But by April, administration officials expect supply of the vaccine to outpace demand, requiring increased outreach to persuade hesitant Americans to roll up their sleeves.

Biden’s overarching strategy thus far has been to under-promise and over-deliver, a proven political strategy that comes with reminders that Americans need to remain vigilant as more contagious variants of the virus take hold.

In his first days in office, Biden had promised enough vaccine for all adults by the end of summer. He moved the timetable up to the end of July through additional purchases of Pfizer and Moderna vaccines. This past weekend’s approval of the Johnson & Johnson vaccine, combined with a new production deal with Merck and manufacturing improvements for the existing shots, gave Biden confidence Tuesday to set May as the new milestone.

Yet even as he holds up the vaccinations as a promising step toward normalcy, Biden has been loath to set a clear timetable.

“I’ve been cautioned not to give an answer to that because we don’t know for sure,” he said Tuesday after announcing the stepped-up vaccine timetable. And then he offered his subdued goal for “this time next year” or better.

“But again,” he added, “it depends upon if people continue to be smart and understand that we still can have significant losses. “

Unlike his predecessor, who frequently established goals he could not meet, Biden has tried to set modest expectation and then beat them. His initial goal to administer 100 shots in his first 100 days will be easily surpassed.

But even as the timetable for vaccine supply has sped up, the president has repeatedly pushed back his guess about when things will get back to normal. He raised eyebrows recently when he suggested Christmas, and then again on Tuesday when he pointed to early 2022.

Biden’s hesitance, aides say, stems from lingering uncertainty over the potential for vaccinated individuals to still transmit infections, as well as concerns over rising coronavirus variants that could challenge the effectiveness of the shots.

It’s an outgrowth of his pledge to “follow the science” in his decision-making on the pandemic — an explicit rejection of former President Donald Trump’s unrealistic predictions and unfounded prescriptions for the public. But some public health experts worry that Biden may be overcorrecting.

Once there is more vaccine saturation, some experts say, the messaging will need to shift to how to safely reopen, with less emphasis on dire warnings and more of a push on how the effectiveness of the vaccine allows for a return to day-to-day life. On Thursday, the Centers for Disease Control and Prevention is set to offer initial guidance for what vaccinated individuals can and can’t safely do.

Former CDC Director Tom Frieden called it a “necessarily mixed message,” pointing to progress with vaccines and cases coming down from January highs, but also the persistent rate of infection and the rise of variants.

“On one hand you want people to know we have reason to hope the end may be near, but also, don’t let down your guard,” said Frieden, president and CEO of Resolve to Save Lives. “Almost always you’re setting public policy based on the best available evidence, where not everything is certain. But in this case, you do want to apply the basic concept of better safe than sorry.”

The virus’ ability to cause mass death may be fading because some of the most vulnerable populations have been vaccinated, but even so, COVID-19 has the potential to remain a potent killer.

Frieden said the next several weeks would be instructive: “We’ll know which way cases are going. Are we going into a fourth surge? Are we stalling out at a very high level of infection? Or will the decline resume?”

Trump’s unrealistic assessments of the pandemic’s trajectory left Americans uncertain what to expect. He set a goal to reopen the country by last Easter, nearly 11 months ago, and in the fall frequently declared that the vaccines would be available “in weeks” even though public health experts warned they would not come until after the election.

Moreover, Trump played down the severity of the crisis, leading many of his supporters to disregard basic health guidelines and fall ill, while also erroneously proclaiming on the fall campaign trail that the nation was “rounding the corner” on the pandemic, an incorrect prediction not forgiven by voters.

“Managing expectations is the first step to effective crisis response,” said Alex Conant, a senior campaign adviser to Sen. Marco Rubio’s 2016 presidential campaign. “If you exceed expectations, you’re a hero. If you fail to meet them, you’re a failure. You want to be honest with people about what is attainable and then make sure you hit those goals. Trump tried to win news cycles; Biden has been trying to win elections.”

While Tuesday’s optimistic announcement about the vaccine supply sent hopes soaring, it also raised pressure on the Biden administration to actually get them administered to Americans. Failure to do so would be viewed as a bitter disappointment and clear political setback.

“The buck stops with the president,” Conant said. “If Americans can’t get access to vaccines, they are going to blame the guy in charge.”

EDITOR'S NOTE: Jonathan Lemire and Zeke Miller have covered politics and the White House for The Associated Press since 2013 and 2017, respectively.