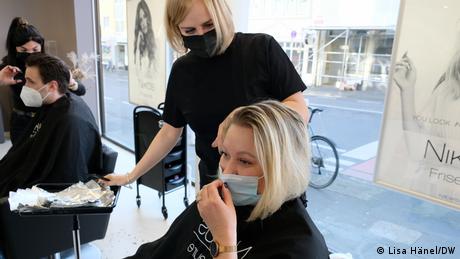 For all those who've been enduring endless bad hair days, there is good news. As of Monday, hairdressers will be allowed to open nation-wide. While that may not be high on many people's priority list, it seems it's not only a "question of hygiene" but also "dignity" as Bavaria's state premier, Markus Söder, put it recently. A visit to the hairdresser will be by appointment only and strict hygiene measures apply.

If you want a complete makeover, beauticians in some states will also be open for business. To brighten up your day even more, hardware stores in a majority of the 16 states will be able to sell plants and garden supplies.

Chancellor Angela Merkel and Germany's 16 state premiers are due to meet on Wednesday to discuss how to address the other lockdown measures that currently run until March 7. There has been widespread criticism over lack of a clear government strategy for orchestrating a gradual emergence from lockdown.

Having come through the pandemic relatively unscathed so far, things have taken a dramatic turn for the worse in Finland. On Monday, the government declared a state of emergency after a sharp rise in infections due to virus variants. The move means authorities can order restaurants, bars, businesses and public spaces to shut down. More schools are also expected to be shut again.

The country is going through a somewhat torrid time. With Prime Minister Andrej Babis acknowledging that he and his government have made mistakes in tackling the pandemic, the country is now facing the tightest lockdown since the outbreak.

The Czech Republic has seen a surge in the number of daily infections recently. On Thursday, the figure stood at 14,457, around 2,750 more than the previous week. The aim of the strict measures is to get that number down to a total of 1,000 per day.

As of Monday, Czech nationals will not be allowed to travel abroad unless it's for work or to care for relatives. Restrictions are also in place closer to home: if people go for a walk or outside for sports activities, they must stay in their municipality. Face masks are now mandatory in towns and cities, both outdoors and at work, while the government is also requiring companies to mass test their employees and extend quarantine from 10 to 14 days.

Nursery schools and those for children with disabilities that had remained open until now will also close.

To ease the burden on local clinics and the health system in general, the government is debating whether to send severely ill COVID-19 patients to hospitals in Germany and Poland.

Against the backdrop of anti-lockdown protests in Copenhagen over the weekend, Denmark is set to ease some restrictions. Stores under 5,000 square meters (54,000 square feet) will be allowed to reopen, while outdoor activities are permitted but limited to 25 people. Schools in parts of the country will also be allowed to reopen but students will be required to test themselves twice a week.

Other restrictions, however, remain in place and have been extended until April 5. They include the closure of bars, restaurants and most secondary and higher education institutions.

The number of COVID-19 infections has fallen markedly over the last few weeks but at the same time authorities are concerned about the spread of the UK virus variant which is deemed to be more infectious.

From March 1, secondary school and junior college students in the Netherlands will be back in classrooms part-time.

Retailers are set to reopen as of March 3, but shoppers will have to make a prior appointment. No more than two customers per floor and six bookings per hour are allowed.

Contact professions will open their doors from March 2, including hairdressers, beauticians, masseurs, and driving instructors. Public locations, such as theaters, museums and zoos remain closed. The maximum number of visitors allowed in the home is one per day. Outside, the maximum size of groups has been reduced from four to two people.

Outdoor group sports are allowed for those 27 or younger from March 2. However, competitions are still not allowed.

Much maligned for its initial confusing instructions on rules and regulations (see below), the UK is currently the champion of Europe on total vaccinations.

Prime Minister Boris Johnson's government has now rolled out a four-stage plan to ease restrictions in England with the aim of lifting them all by June 21 at the earliest. The first phase is set to start on March 8, and includes opening all primary and secondary schools. Care home visits will be allowed but will be restricted to one person wearing personal protective equipment (PPE) and with documentation of an antigen test.

Socializing will also be allowed again within limits. As of next week, two people from different households can get together outside for recreational purposes such as meeting for a coffee, drink or a picnic.

Three weeks after reopening shops across the board, the government is looking into further measures to ease restrictions. Top of the agenda is whether hotels and restaurants will be able to reopen, notwithstanding a rise in the number of daily infections. As of Monday, free rapid testing will be made available, with every Austrian aged 15 and over being allowed to pick up five tests per month from pharmacies.