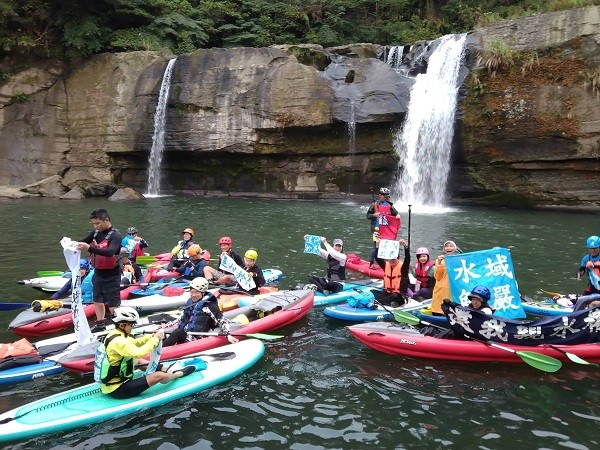 TAIPEI (Taiwan News) — More than 20 canoe and standup paddleboarding enthusiasts on Monday (March 1) protested under the Lingjiao Waterfall in New Taipei’s Pingxi District against the city government’s ban on water sports at the site.

The ban was put in place in October of last year, following the drowning death of a college student at the waterfall the previous summer, CNA reported.

Canoeing coach Lee Yuan-chih (李元治), who organized the protest, told media that accidents happen on highways, yet this does not result in permanent road closures. Instead, safety improvements are made.

The coach said drowning incidents usually happen when tourists who are poor swimmers and not properly equipped go into the water on a whim.

As the weather warms, more people will wish to swim, Lee said. He urged the government to step up water safety education instead of banning water sports, which he argued would be unlikely to reduce drowning.

In response, New Taipei City Department of Tourism and Information Commissioner Chang Chi-chiang (張其強) said the only area in Pingxi where water sports are banned is under the Lingjiao Waterfall, with the rest of the river valley open.

He added that when it comes to river valleys, the general rule is they are open. Exceptions to the rule include cases of unstable water flow, fast-flowing water, steep terrain that poses a challenge to rescue operations, and waterways.

Chang emphasized the importance of visitors abiding by safety rules and exercising personal care. He maintained that water sports are good for tourism and promised to minimize the area under regulation.