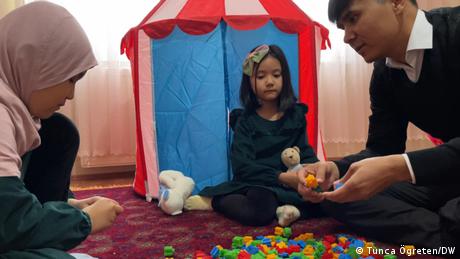 "I lost touch with my family five years ago; I only learned of my father's death one year later," a teary-eyed Abdüsükür tells DW. The 32-year-old is based in Istanbul's Zeytinburnu neighborhood, where most of the city's Uighur immigrants live and work. He earns a living working in a secondhand shop for mobile phones.

Abdüsükür is one of approximately 50,000 Uighurs who have recently fled China seeking safety in Turkey. The Chinese government has been persecuting the ethnic minority, with witnesses reporting that Uighurs have been detained in inhumane conditions in reeducation camps. Many of them, including minors, are picked up and deported without warning.

Abdüsükür fled China's northwestern Xinjiang province five years ago. "We were constantly persecuted in East Turkestan [Xinjiang province]," he tells DW. "Many people were jailed, or taken to reeducation camps, just for praying."

The Uighurs are a Turkic-speaking ethnic group, most of whom are Muslim. Many have fled to Turkey as they have much in common with Turks culturally, and Turkey's government has promoted their migration for years. Today, the country's hosts the largest community in the Uighur diaspora.

"I was scared not only for myself but also my family," Abdüsükür explains his decision to leave China. "That's why I decided to flee to Turkey." But he has paid a steep price for his new life abroad, saying he has only spoken to his mother once since leaving. "Uighurs living in Turkey are prohibited [by Chinese authorities] from speaking to their relatives back home," he says. Millions of fellow Uighurs have been placed in reeducation camps, Abdüsükür says. There are no official records documenting how many have been detained, though some estimates put the figure at several hundred thousand.

He only found out his father had died when a friend informed him. Abdüsükür then immediately called his mother in Xinjiang. After confirming his father's death, she told him not to call again, saying "if they [Chinese authorities] find out, they will come after us." That was the last time he spoke to his mother.

Abdüsükür regularly joins protest marches against the persecution of China's Uighurs and is using social media to raise awareness for the problems in his home country. He was arrested several times by Turkish authorities for participating in rallies. He got very scared when they launched an investigation into his actions; without Turkish citizenship, he could get deported. In 2017, after all, Ankara and Beijing agreed a repatriation agreement which could speed up deportations, though Turkey's parliament is yet to ratify the deal.

Ömer Faruk moved to Turkey in 2016. The 31-year-old Uighur immigrant possesses Turkish citizenship, which means he cannot be deported. Still, life in exile has been a struggle. Faruk, who has five children, had to leave his two daughters behind when he moved to Turkey.

Many Uighur emigrants — including Faruk — find that their relatives, including young children and even seniors, vanish without trace in China. Faruk remembers receiving a call from his wife when he worked as a labor migrant in Saudi Arabia several years ago. She told him Chinese police had come to their home, wanting to confiscate their passports. He then urged her to tell the police she would deliver the documents in a little while.

He told her to book flights to Turkey and leave the country immediately. But their young daughters — 1 1/2 and 3 years old — did not yet have passports. Faruk's wife and two young daughters were forced to remain in China, while he met his other three children in Turkey.

Faruk's wife later flew out to join him in Turkey, leaving their young daughters with his mother-in-law. He says his brothers then wanted to help his daughters reach Turkey but were arrested. Faruk's mother-in-law was placed in a reeducation camp.

"I don't know where my daughters are at this moment," he says, distraught. He cannot even say whether they are still alive, as he has lost touch with family members still in China. According to Faruk, Uighurs who move to other countries, such as Austria or Egypt, have a much easier time reuniting with family members abroad.

"My wife is at her wit's end, she can't sleep at night, and my children are constantly thinking about their sisters," Faruk tells DW. They want to know when they will finally be reunited. "I am desperate; did they put them in camps? Nobody knows."

At least, he says, he cannot be deported as a Turkish citizen. That's why he often joins protest rallies outside China's Ankara embassy, and its Istanbul consulate, to draw attention to the Uighurs' plight.

This article has been adapted from Turkish and German.