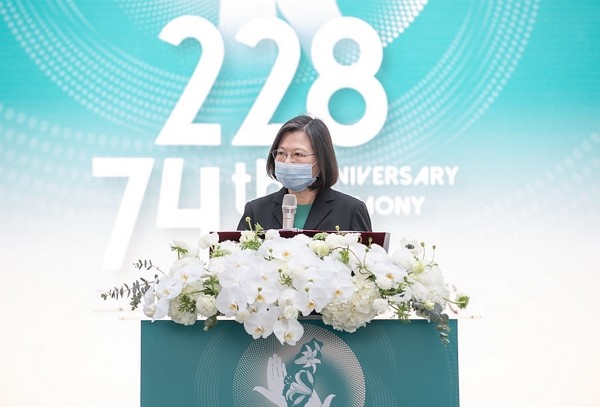 TAIPEI (Taiwan News) — President Tsai Ing-wen (蔡英文) on Sunday (Feb. 28) emphasized that Taiwan's freedom and democracy are not bargaining chips to be traded while speaking at a ceremony to commemorate the 74th anniversary of the 228 Incident.

In addition to presenting flowers in memory of the victims, Tsai urged the Taiwanese government to "face its past with honesty" and protect the rights of its people on Sunday. She expressed hope that the Taiwanese will learn to define their history together and “allow flowers of freedom and democracy to bloom across the nation.”

Tsai pointed out that Kaohsiung was the first city in Taiwan to suffer from a violent military crackdown during the 228 Incident. She said the country lost a generation of elites under the repressive martial law and that people were too afraid to speak up against their government at the time.

Tsai remarked that discussion of the massacre was considered a taboo subject for many years. Fortunately, with the continuous efforts of those who insisted on fighting for their freedom, Taiwan was eventually able to transition to democracy, she said.

Tsai said it is important for the government to learn its lesson from the 228 Incident to avoid repeating similar tragedies. She stressed that the values of freedom and democracy are the foundation of Taiwan's development and that they must not be sacrificed for any reason.

After concluding her speech, Tsai personally awarded "certificates of restored reputation" to family members of the 228 Incident victims, including Pan Hong-quan (潘鴻泉), Chen Tsang-hai (陳滄海), and Chen Wen-chih (陳文治). She apologized on behalf of the government for the pain it caused them 74 years ago. People lining up to present flowers in honor of the victims. (CNA photo)