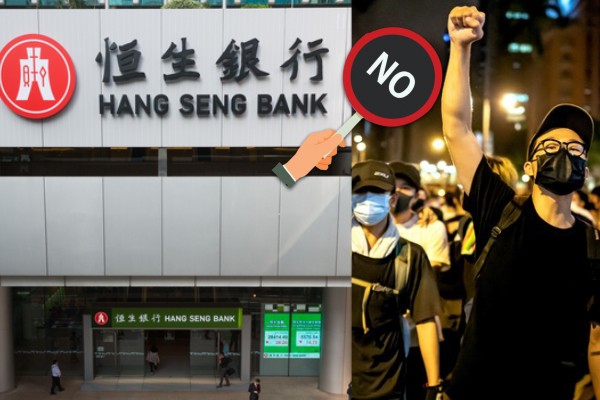 TAIPEI (Taiwan News) — High-profile dissidents and pro-democracy protesters have become targets for banks in Hong Kong, according to Apple Daily.

One protester arrested by police during the anti-extradition bill protests in 2019 reported that his bank accounts were canceled or frozen without his consent over the past few months. Cases of accounts being canceled by local banks in the semi-autonomous city have risen, one local lawyer said.

The protester, referred to just as "Tommy" in the Apple Daily report, said he opened an account at Hang Seng Bank in November but was unable to withdraw money from it just one month after. Only when he called the bank did he realize his account was frozen for "internal audits."

He said he had deposited a few hundred dollars each time, and fewer than seven transactions were made in total. When he visited Hang Seng's branch to withdraw his deposit, the bank official refused and could not answer why it was frozen and how long this would be for.

"This is the money I properly earned by myself. Is Hong Kong becoming a place where people have to feel concerned when trying to retrieve their own money?" Tommy said. Since he was arrested at the end of 2019, finding jobs has not been easy, especially when employers learn he faces court cases related to the mass protests.

It is not the first time banks have turned their backs on Tommy. Before he opened an account at Hang Seng, his Bank of East Asia account was canceled, and the excuse of internal audits was given. On this occasion, he was required to withdraw all his money before the bank shut down his account.

A Hong Kong lawyer who has defended several anti-government protesters, Chan Wai-yuen (陳惠源), said he had heard of at least two other protesters whose accounts were canceled by banks with no clear reasons given. He said if a bank deviates from normal procedure to close accounts without notifying the owner in advance then there may have been external orders from an influential source.

He believes even if a bank is told what to do by the government, it still has legal liability, as it has the final say on how to process the order. Refusing to provide reasons when closing accounts is not acceptable.

Evidence shows Hong Kong's pro-Beijing administration is using its control over the city's financial system to penalize dissidents. HSBC Holdings froze former Hong Kong Legislative Councilor Ted Hui (許智峯) and his family's accounts after he announced his exile in the U.K. in December. In a letter to Hui, the bank's CEO admitted the corporation was legally bound to take action upon requests from the Hong Kong police.