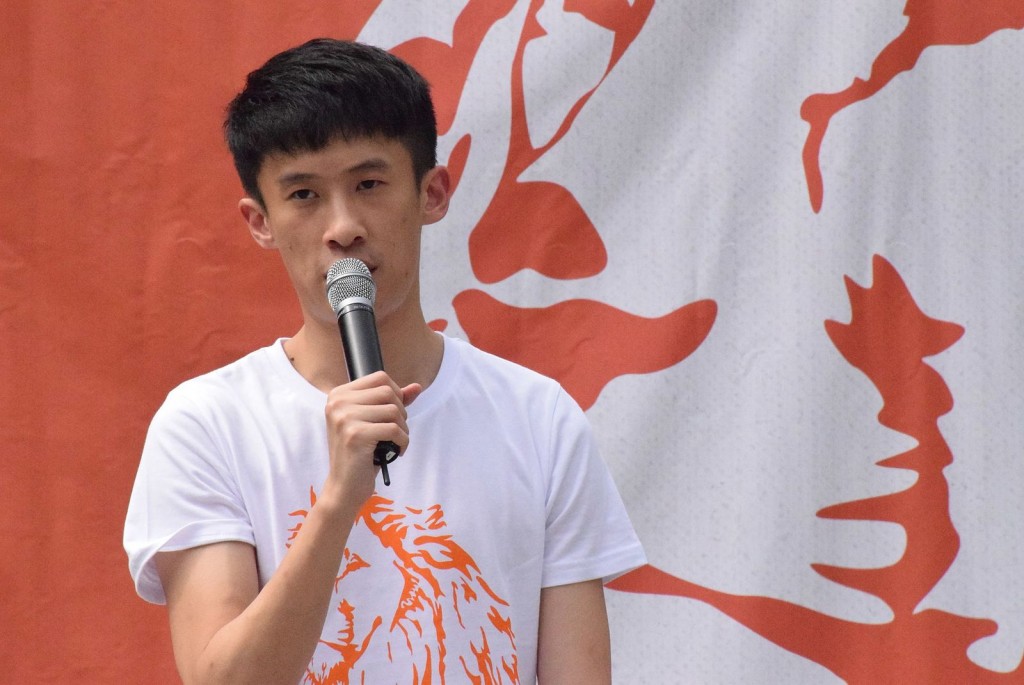 TAIPEI (Taiwan News) — Former Hong Kong legislator and Youngspiration leader Sixtus "Baggio" Leung (梁頌恆), who fled to the United States in December after being persecuted by the Hong Kong authorities, recently spoke with Taiwan News about how a new agenda for democracy in the territory was being formulated.

Leung, 34, briefly assumed office in Hong Kong’s Legislative Council (LegCo) in October 2016. He was removed just over one month later because he inserted a personal political speech into his oath of office.

Following that ordeal and his attempts to reclaim the office on behalf of those who voted for him, he was subject to various forms of harassment in Hong Kong, including detention and being followed by police, he said in a video call.

In the wake of Beijing’s passage of the National Security Law for Hong Kong, which criminalizes nearly all forms of dissent in the territory, Leung realized it was only a matter of time before he ended up back in the crosshairs of the authorities. So, he made the decision to seek political asylum in the U.S. at the end of 2020.

Now he is regrouping with other overseas activists, making contacts with U.S. officials, and helping to formulate the agenda for Hong Kong’s democracy movement.

“In the short term, we’re trying to raise awareness about the 53 arrested pro-democracy activists,” he said. “While 52 out of the 53 are out on bail, they are banned from leaving Hong Kong and could be charged at any time. The harshest penalties would be life in prison.”

“The only way to make them comparatively safe is our continued attention and to tell the Beijing government that the free world will not accept this,” he said.

“In terms of our long-term goals, we are hoping for a lifeboat for Hongkongers — especially for those born after 1997 who lack a BNO (British National Overseas) passport — and financial sanctions that can shut down the Chinese Communist Party (CCP) here in North America.”

The former legislator gets the difficulty of making things happen quickly in Washington: “In U.S. political circles, they’re in a kind of transitional period, but they’re very open to listening to different proposals. But it’s difficult for us to expect concrete plans to launch right now.”

“Maybe after six to nine months is a more realistic time for us to expect something to happen,” he continued. “What we’re doing here now is building the foundation for different groups.”

Shut down the ATM

“This is not just an issue between Hong Kong and China, nor Taiwan versus China, nor the U.S. versus China,” he said. “It’s a war between the free world and the largest dictatorship in the world.”

“At the end of the day, we need to do something to shut down their ATM and slow them down … This is why I propose we need to shift the direction from sanctioning only particular officials to targeting Hong Kong’s financial system,” he said.

On how this would be received by the people of Hong Kong, Leung was blunt: “One slogan that has been very popular since last year has been that ‘if you burn it down (Hong Kong), then you (the CCP) burn with us.’ If you struggle against Goliath, I think Hongkongers have come to accept that it may require our own sacrifices in order to win the war.”

When asked about specific financial mechanisms to target, Leung immediately suggested access to the Society for Worldwide Interbank Financial Telecommunication (SWIFT), the system that secures the bulk of cross-border payments and without which any banking institution would be reduced to financial impotence.

Leung mentioned the case of Ted Hui (許智峯), another former Hong Kong legislator, who late last year also fled Hong Kong only to have his entire family’s accounts frozen by British bank HSBC. The bank's CEO Noel Quinn maintained he had no choice but to cooperate with local laws.

In the view of Leung, examples like this demonstrate an unacceptable complicity between international finance and the CCP.

In early January, a group of exiled Hongkongers announced plans for the Hong Kong Shadow Parliament, an institution designed to represent the political will of the territory absent free and fair official elections.

The initiative is still in its early stages, with a secretariat of activists, scholars, and political figures established to prepare for an eventual public consultation. Leung stresses the importance of this in light of the corrupted election process that currently exists in the territory:

“The problem in activism is that foreign officials will say, ‘Do you guys have a proper mandate from the Hong Kong people?’”

An exact process for how to conduct an election remains elusive for now, but Leung is clear that, “We need to solve this in the middle and long term … We still need to follow Hongkongers' rules and wishes, and only by a proper election can Hong Kong guide this group of overseas activists.”

In October 2016, Leung and several other newly elected members of Hong Kong’s LegCo used their swearing-in ceremony to make statements in support of Hong Kong’s democracy — and in some cases independence. They also made derogatory remarks about the Beijing government, which led to their expulsion from the LegCo shortly thereafter.

“If I had a crystal ball,” Leung said, “and I knew all these things that would happen, including the movement in 2019 and that they would just cancel the election, which means that 2016 was the last so-called legitimate election … then I would say I would have pushed things even further.”

“I needed to take this chance to show the world that some Hongkongers … we think the CCP is a liar and will not play by the rules," he said.

“We do not think Hong Kong is China," he added. "We do not need one-country, two-systems. We do not need the Sino-British Agreement. And so I took this chance.”