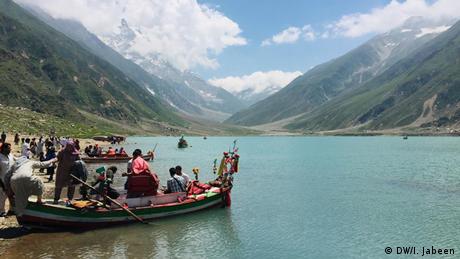 Pakistan has emerged as one of the most sought-after tourist destinations over the past few years. The South Asian nation topped several international travel lists such as Forbes' "The 10 coolest places to go in 2019" and Conde Nast's "best holiday destination in 2020."

But the onset of a global health emergency and the resulting restrictions on worldwide travel have derailed the government's plans.

"Because of COVID, we couldn't implement the government's tourism strategy over the past year," Babar Javaid, communications manager at the Pakistan Tourism Development Corporation (PTDC), told DW.

"Tourism is a priority area for this government," he said, pointing to the sector's significant contribution to economic activity, direct investment and poverty alleviation.

In recent years, travel bloggers have flocked to Pakistan, drawn by the country's tall peaks, lush valleys and rich heritage.

The content they produced and posted on social media contributed to the surge in global interest.

Their promotion of Pakistan as a travel destination offered some solace to a population that has lived through decades of military crackdowns, terrorist violence and political instability.

Eva Zu Beck, a British-Polish traveler and content creator, is arguably the most recognizable vlogger to have promoted travel to Pakistan. She even believes the country could be the world's top tourism destination.

Zu Beck has over 551,000 followers on Instagram and more than 905,000 channel subscribers on YouTube. Some of her videos about Pakistan have been watched millions of times.

Tourism has negative side effects

"With Pakistan's tourism, there's this goldrush feeling, where everyone is excited about the economic possibilities without really thinking about the bigger picture of how sustainable tourism can be supported in the country," she told DW.

She pointed to the nation's delicate ecosystems, particularly in the Gilgit-Baltistan region, and stressed the need for sustainability.

Zu Beck noted that during her travels to Pakistan, she noticed a shift and that newly constructed gray concrete structures starkly juxtaposed the traditional architecture and beauty of the valleys.

"This is actually a really important opportunity for the Pakistani government to take advantage of this 'pause' in tourism and develop infrastructure for the benefit of travelers, local communities and the environment," Zu Beck said. "Then the country will be able to deal with the influx of tourists better in the future as well."

Climate change and a threat to ecosystems

They call for the promotion of ecotourism. "Ecotourism is about managing the negative impact of tourism by engaging the community actively and transferring benefits to them," Ali Nawaz, director of the Snow Leopard Foundation, told DW.

"They are the custodians of these ecosystems and only they can truly protect them," he added, underlining that ecotourism helps ensure economic development while protecting ecology.

Nawaz also pointed out that during the COVID crisis, there have been increased sightings and activity of wildlife in their project areas. "Wildlife is dynamic and is impacted by human activity. We saw more brown bear activity in Deosai Plains as there were fewer cars. The pandemic has showed the world how nature can thrive if humans are more respectful."

Regarding ecotourism, PTDC's Javaid said Prime Minister Imran Khan would be launching a plan this year to address the issue of negative side effects of increased tourism.

Locals hurt by hit to tourism

Shamim Bano, 45, a mother of four children, has been working for Korgah, a small women-run carpet-making company since 1998.

She said she used to earn about €200 ($242) a month, money that would mostly go toward her children's education.

But the pandemic has put a temporary stop to the influx of foreign tourists, stalling Korgah's business by depriving it of a significant share of its customers.

"Now slowly, travelers are coming back and things are picking up. But we do not know when this health crisis will end, so the future still seems unsure," Bano told DW.

"For poor communities like us, we have come to rely on tourism, so we don't want a lockdown again but we want help," said Bano.

Mehnaz Parveen, CEO of the Karakoram Area Development Organization, told DW that about 70% of inhabitants in the Hunza valley area of Gilgit-Baltistan are either directly or indirectly dependent on tourism for their livelihood.

"We therefore started an online platform to promote e-commerce and sales of handicrafts online," Parveen said, adding: "We have to invest in our beautiful places if we want to keep living in them."