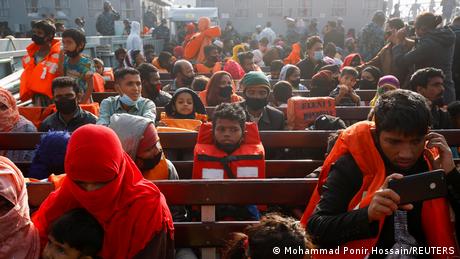 Over the past several months, Bangladesh has transferred over 10,000 Rohingya refugees to a remote island, despite opposition from international aid agencies.

The island, named "Bhasan Char" or floating island, first emerged just 20 years ago as a sandbar in the Bay of Bengal. Experts have questioned whether it is even habitable, as the area is prone to monsoons.

In December, Bangladeshi authorities began relocating Rohingya refugees from crowded camps in the southern Cox's Bazar region to the island. Relocation is planned for 100,000 refugees.

About 750,000 Rohingya Muslims had to flee from Myanmar to neighboring Bangladesh in 2017 after Myanmar's military launched a counterinsurgency operation, involving mass rape, murders and the torching of villages.

Bangladesh hosts over a million Rohingya in total, with most of them living in five overcrowded camps in Cox's Bazar.

Some relocated refugees say authorities made promises of cash payments, which were not met.

The 20-year-old refugee moved to the silt island with her husband and kids as part of the first batch of refugees in December. She said that they each received the payments when they started the journey from Cox's Bazar, but haven't received any money since.

"Every member of my family got 5,000 Taka when we got on the bus. We spent it after coming to the island and they didn't give us more money. We don't have any means to earn money and fulfill basic needs," Salma added.

Other Rohingya refugees told DW that relocation organizers had promised them regular payments for staying on the island.

However, Bhasan Char's government representative, Wasiqul Islam, told DW that cash payments to refugees are against the rules.

"We heard complaints that some refugees received money when they decided to come to the island. We are investigating it," he said, adding that no promises were made to give a monthly cash payment to refugees.

Mohammad Faisal (not his real name), another Rohingya on the island, told DW that the island lacks doctors and medical supplies.

"A Rohingya woman died recently because she didn't get proper medical care. Another pregnant woman needed urgent medical care. But the island's medical facility is incapable of supporting her," he said.

Faisal claimed that the hospital only offers paracetamol to patients for any disease.

"My life in Cox's Bazar was much better. We had everything we needed to treat our kids," the refugee said, adding accessing medicine and care on the island is "very difficult."

"I saw a hospital on the island, but they only offer paracetamol. I didn't find any doctors there when I went seeking treatment," he told DW.

Government representative Islam said that patients in need can be sent to a nearby island with better medical facilities.

"We have done that already when needed," he said.

No freedom of movement

Before the Rohingya relocation, Bangladesh's government took many initiatives to make the island habitable.

Construction work on the silt island started in early 2018 and was rushed to completion in less than 18 months at a total cost of $272 million (€248 million), according to Bangladesh's navy, which is overseeing the project.

An embankment was made to protect the island from high tides and flooding. Rows of concrete housing were built designed to hold four people per room. Facilities include showers, kitchens, rainwater harvesting systems, solar power and biogas.

Although the refugees DW spoke with by telephone have not complained about the facilities, they have said they are subject to many movement restrictions while living on the island, including going to the seaside and fishing.

Faisal, who used to work for an NGO at Cox's Bazar, said that relocation organizers promised refugees identity cards to move freely in and outside of the island.

"The ID card is supposed to allow free movement like for Bangladeshi citizens. We haven't got it yet," he told DW.

"I have no job here. My kids can't go to school because no school has opened," he said.

Nur Ahmed, another refugee who moved to the island recently, said Bhasan Char doesn't have trained teachers for kids.

So far, some members of the Rohingya community are giving lessons to kids. Proper schools have yet to be opened.

"We used to get 13 kilograms of rice per person as ration in Cox's Bazar camps. Here we get 10 kilograms per person, which is not enough for a month," the 42-year-old refugee told DW.

Commodore M Rashed Sattar, the project director of the Bhasan Char island, told DW that some NGOs have already started operating on the island to create job opportunities for the refugees.

"Local clothing brand Kay Kraft is planning to train refugees to make them ready to produce its clothes on the island. Other businesses are also showing interest to create job opportunities here," he told DW.

Sattar said he is waiting for other refugees to come to the island before further plans are implemented, including providing cattle and farmland to refugees who agree to relocate.

"We can't give farmland and cattle to everyone. We don't have that much land here. But we will train the refugees and decide who will get what. It will take some time," he added.