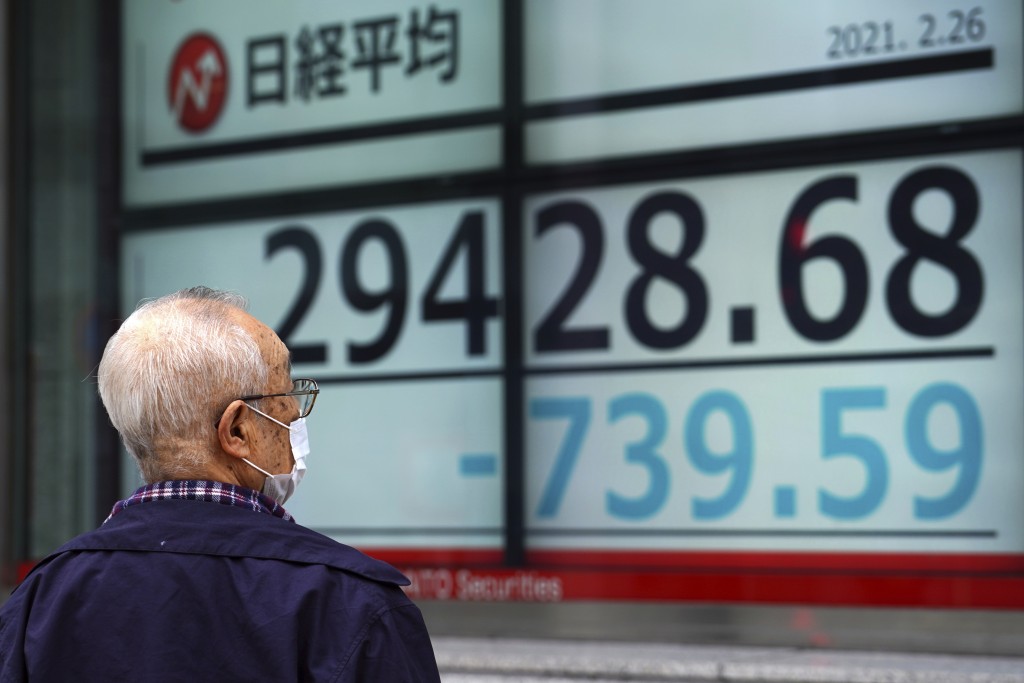 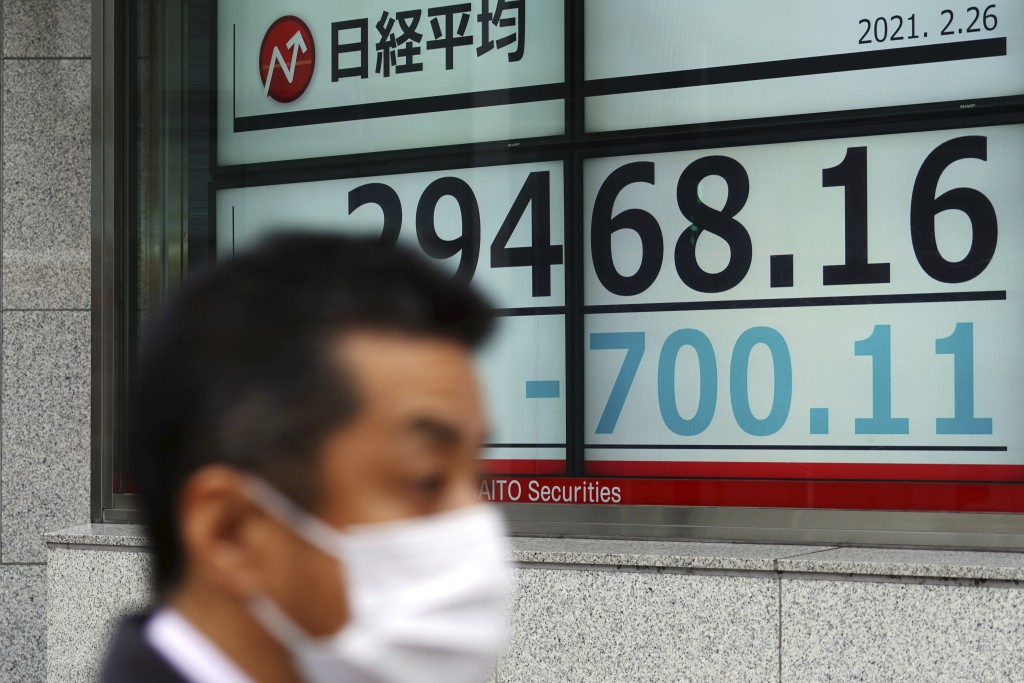 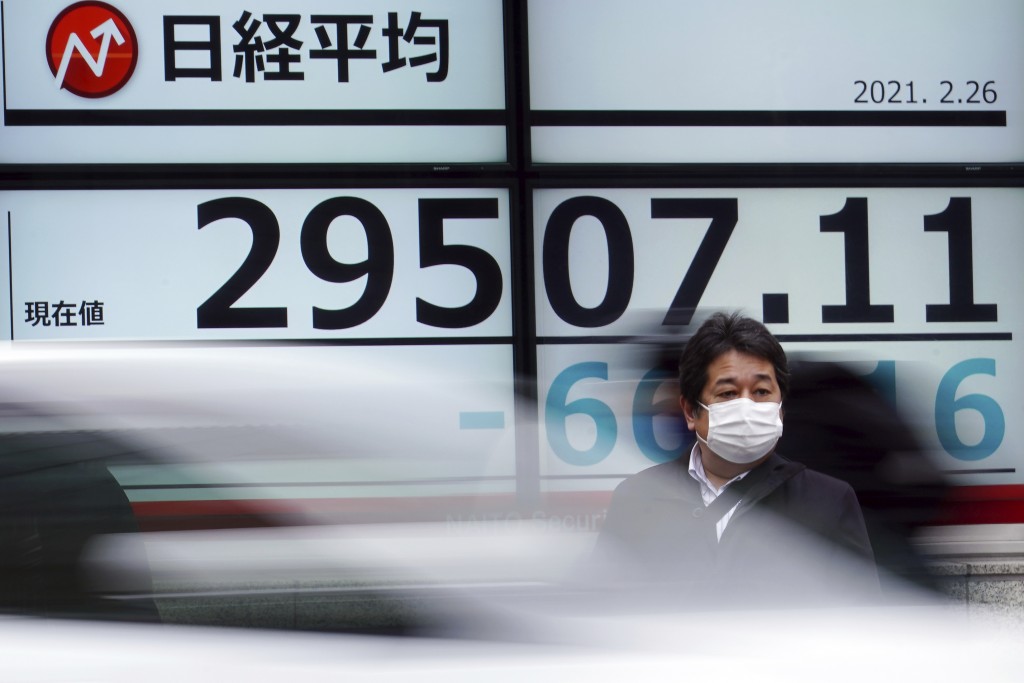 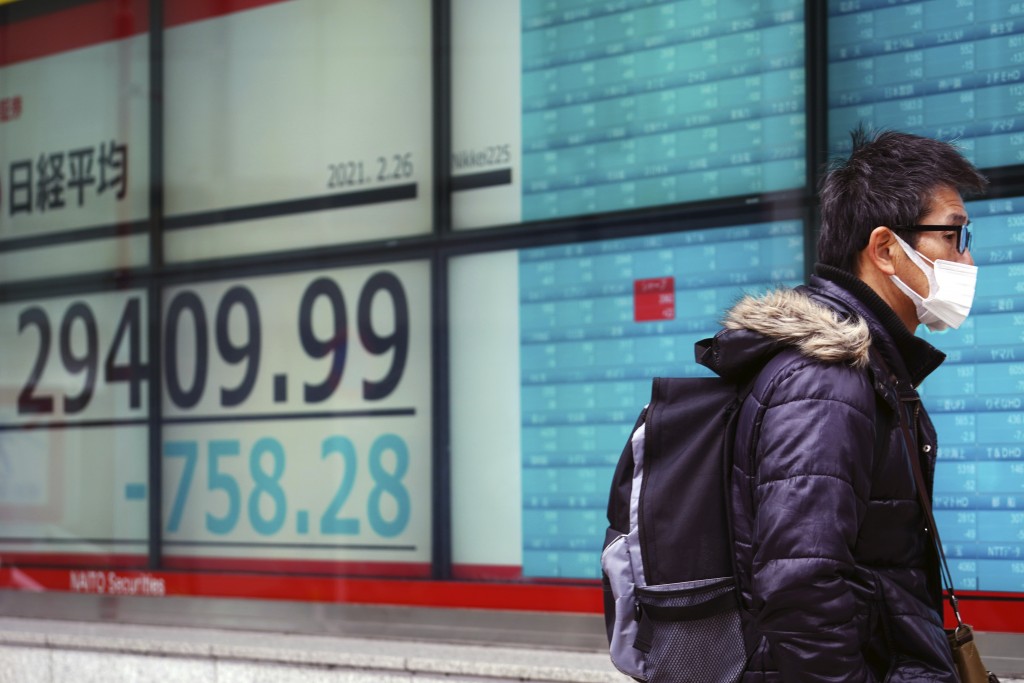 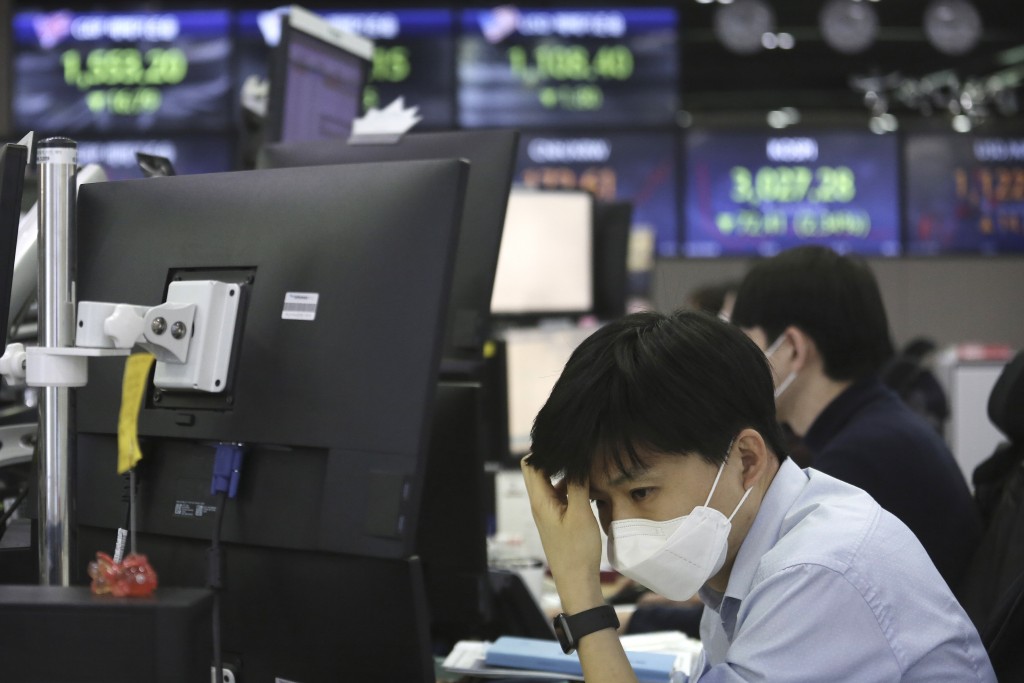 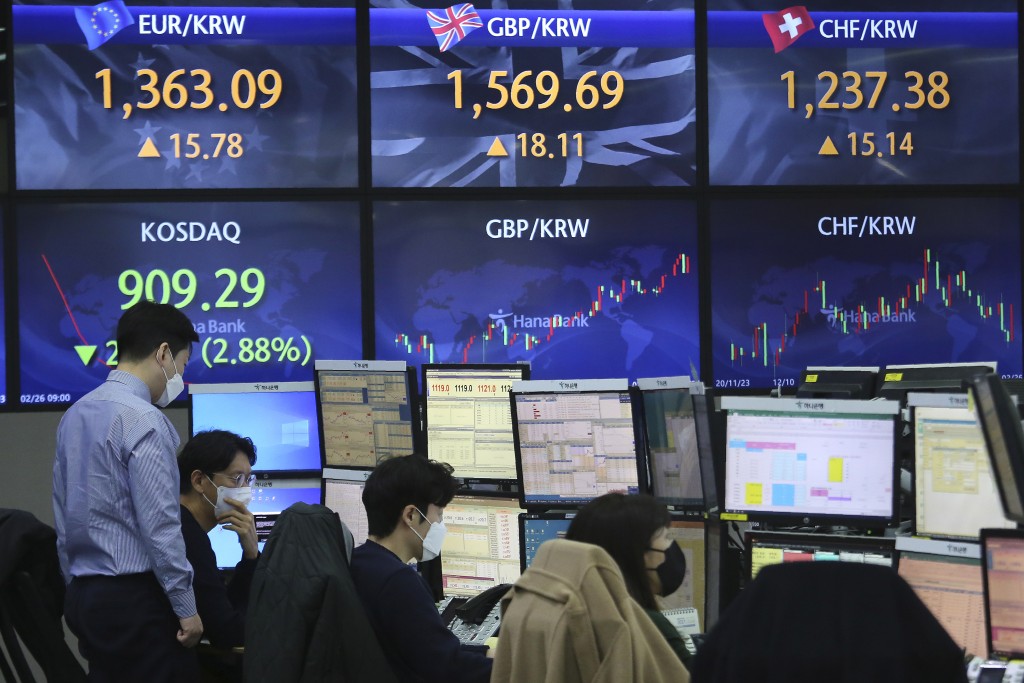 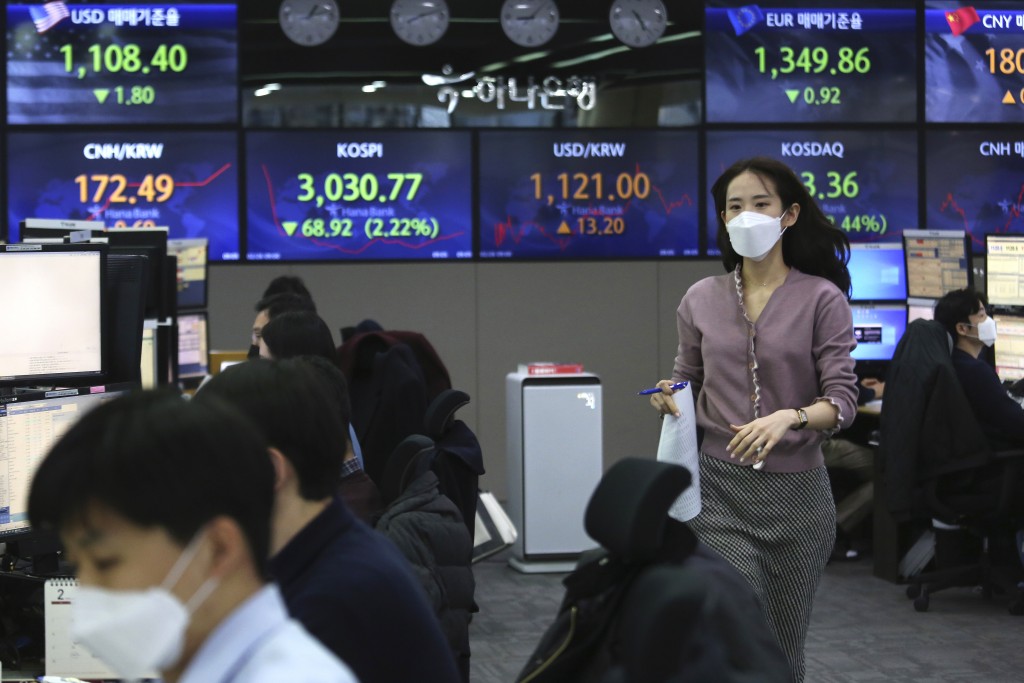 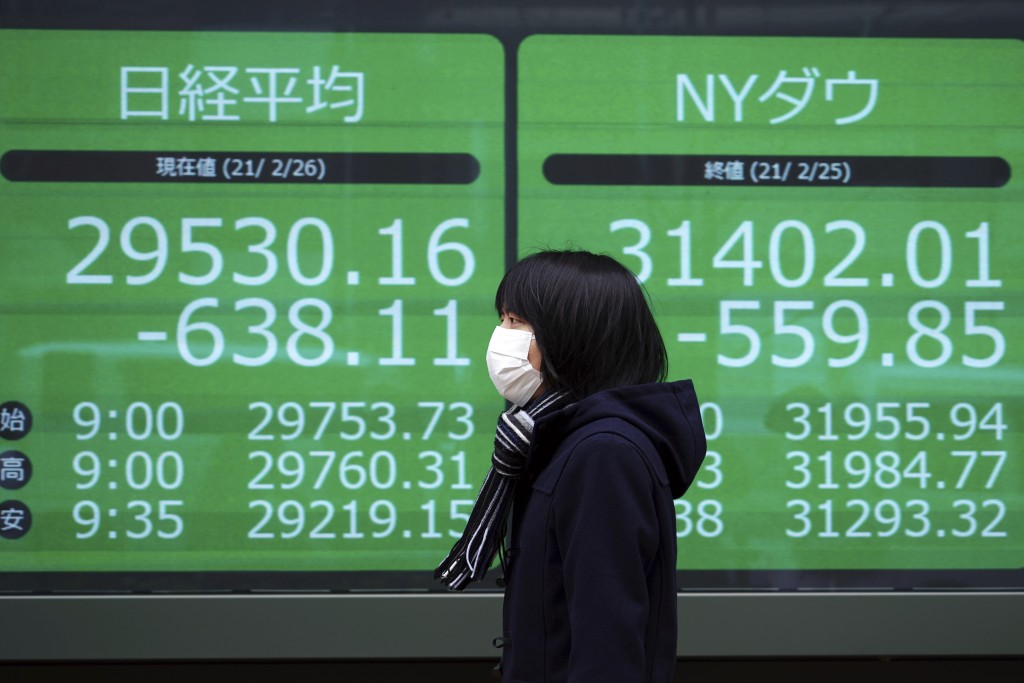 Tokyo, Hong Kong and Sydney all fell 2% or more in early trading Friday.

The tech-heavy Nasdaq shed 3.5% on Thursday while the S&P 500 dropped 2.4%, led lower by heavy selling in technology and communications companies.

The sell-off gained momentum when the yield on the 10-year U.S. Treasury note moved above 1.5%, a level not seen in more than a year and far above the 0.92% it was trading at only two months ago. That move raised the alarm on Wall Street that yields, and the interest rates they influence, will move higher from here.

Bond yields have been rising this month, reflecting growing confidence among investors that the economy is on the path to recovery, but also expectations that inflation is headed higher, which might prompt central banks eventually to raise interest rates to cool price hikes. Rising yields can make stocks look less attractive relative to bonds to some investors, which is why every tick up in yields has corresponded with a tick down in stock prices.

In the past, such situations have triggered sell-offs in what has been called a “taper tantrum," referring to a possible tapering off of monetary stimulus.

“This feels like a washout of ‘safe’ positions, and ultimately the market will continue to test the Fed’s resolve to keep a lid on rates. We’re in a precarious spot where any additional easing might be misinterpreted as the Fed losing faith in its own ability to control the market, which would be self-reinforcing," Stephen Innes of Axi said in a commentary.

The U.S. economy grew at an annual pace of 4.1% in the final three months of 2020, slightly faster than first estimated, the government reported. Higher government spending and accelerated vaccine distribution could lift growth in the current quarter, ending in March, to 5% or even higher, economists believe.

Economies in Asia are also on the mend, though rollouts of vaccines lag behind the U.S. effort and pandemic-related travel restrictions and quarantine requirements are still in effect for many countries.

Technology stocks, which tend to have higher valuations, have been one of the victims of the rise in bond yields. As bond yields climb, more investors shift money into those higher yielding assets, which tends to negatively impact stocks that are priced for growth.

Global stock markets have soared over the past six months on optimism about coronavirus vaccines and central bank promises of abundant credit to support struggling economies. Those sentiments have faltered due to warnings the rally might be too early and that inflation might rise.

Federal Reserve Chair Jerome Powell has affirmed the Fed's commitment to low interest rates in testimony to legislators in Washington this week.

The central bank earlier indicated it would allow the economy to run hot to make sure a recovery is well-established following its deepest slump since the 1930s. Powell said it might take more than three years to hit the Fed's target of 2% inflation.

Asian and European central banks also have insisted they are committed to supporting economies for the long haul. But still, investors are jumpy.

“It seems like traders and investors aren’t listening to official policymakers, and they have set their minds on one thing: interest rates will increase sooner than later," Naeem Aslam of Avatrade.com said in a commentary.

“Another reality about the stock market is also that the massive stock rally that we have experienced so far seems to have run out of steam," Aslam said.

Investors also are looking for Congress to approve President Joe Biden's proposed economic aid plan. That includes $1,400 checks to most Americans. However, the plan faces staunch opposition from Republicans and is still subject to negotiations. Democrats have chosen to use the legislative process known as reconciliation that would allow them to pass the bill without GOP support.

In other trading Friday, U.S. benchmark crude oil shed 74 cents to $62.79 per barrel in electronic trading on the New York Mercantile Exchange. It gained 31 cents to $53.22 per barrel on Thursday. Brent crude, the international standard, gave up 76 cents to $65.35 per barrel.