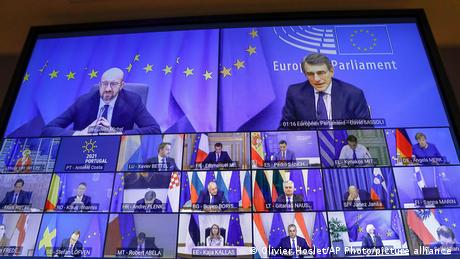 Leaders from the European Union's (EU) 27-member states came to together for a virtual summit on Thursday with the aim of solving pressing coronavirus-related health and logistical problems confronting the bloc.

Member state politicians used the meeting to discuss approaches to speeding up the delivery of vaccines, the implementation and use of vaccine passports and the potential for conflict arising from national border closings.

Perhaps the most important short-term announcement to emerge from the meeting was that of "convergence" around the concept of a vaccine passport.

Speaking at a press conference alongside European Commission President Ursula von der Leyen, European Council President Charles Michel said Europeans and their leaders "need to face the truth" about the difficulty of the task at hand but said hope was on the horizon.

Commission President von der Leyen, too, stressed progress made so far, noting that 8% of the bloc's adult population had already been vaccinated.

One of the more contentious issues EU leaders tackled was that of digital vaccine passports for those who have been vaccinated. Southern EU states such as Greece, Spain and Italy — all heavily or entirely dependent on tourism — believe such a scheme could ease air travel, helping them avoid a repeat of last year's disastrous summer holiday season.

Northern neighbors have been reluctant to buy in amid concerns about discrimination and whether people who have been vaccinated can still carry the virus.

In the evening press conference, German Chancellor Angela Merkel said there was consensus on having the certificates, but not precisely how they should be used.

"Everyone agreed that we need a digital vaccination certificate," the German chancellor said. She added that the certificates could be available by summer as the bloc needs three months to create a technical framework.

She stressed, however, that the creation of the certificates "does not mean that only those who have a vaccination passport are allowed to travel."

Von der Leyen cited Israel's work tracking and documenting a person's vaccination history on so-called Green Passes while stressing the importance of maintaining the functionality of the European single-market.

Though there is no unanimity as yet about what kind of card or cards might be used and recognized across the bloc, von der Leyen spoke of a minimum data system and said the European Commission was working to create a "gateway for interoperability between nations," adding that it would take about three months for the Commission to get the system in place. Von der Leyen said member states would "have to act fast" if the program was to be implemented by summer.

Much has been written about the slow and at times seemingly hapless vaccination programs being rolled out across the EU. Delivery and supply shortages as well as unflattering comparisons to the relative speed of roll outs in the UK and US only underscore the fact that the EU and its member states are lagging in the race to inoculate citizens.

The bloc blames pharmaceutical companies for being woefully unable to fill massive vaccine orders but hope that production and delivery will finally hit stride in April. It is also possible that the new, single-shot Johnson & Johnson vaccine will have been approved by then.

Here, too, von der Leyen underscored tough talks the EU had with suppliers and noted her confidence that companies would soon be up to speed.

"The first task," she said, "is to achieve widespread vaccination. We should maintain our utmost efforts so the pace of vaccination picks up. More than 50 million of doses will have been delivered to the EU by Monday. More than 29 million have been administered as of today. That is 6.4% of the whole population and if you subtract children and teenagers, it is 8% of the adult population."

Trying to stay ahead of variants

There is fear that coronavirus mutations may wipe out the jump scientists seemed to have had on the virus just a few short weeks ago. To date, the virus has killed more than 531,000 people in the EU.

Von der Leyen addressed that issue, stressing the work the EU is doing to remain ahead of the curve. She cited the EU's support for vaccine research, a clinical trial network for vaccines and vaccine sharing programs that will ensure doses do not go to waste.

She specifically singled out another EU project, the HERA incubator (an acronym for the European Health Emergency Preparedness and Response Authority), as key in the fight against virus mutations. First announced last week, the device allows scientists to sequence the genomes of a virus and develop specific tests in order to track changes.

Plenty of wrangling to come over cards and privileges

On Thursday, lawmakers appear to have threaded two needles by generally agreeing to work toward reducing production and delivery bottlenecks while at the same time easing criticism of contentious national border closings.

The bloc officially admonished Austria, Belgium, Denmark, Finland, Germany, Hungary and Sweden over such closings, giving them one week to respond to EU criticism of their national policies.

Germany, like other EU countries, has debated the pros and cons of vaccine passports and whether they could lead to a skewed situation in which some enjoy privileges, while others have none.

Before the conference, Merkel suggested it was too early to issue vaccine passports with so few vaccinated. She acknowledged, however, the potential need for such a digital document in the future.

Austrian Chancellor Sebastian Kurz made the case for an Israeli-style Green Pass for those who have been vaccinated or are immune to the coronavirus.

Prior to Thursday's summit he tweeted: "We want an EU-wide Green Passport, with which people can travel freely, do business without restrictions and go on holiday, as well as finally enjoy gastronomy, culture, events and other things again."

The fortress and beyond

EU leaders say the pandemic is far from over and as long as vaccination remains slow, tight restrictions on social interaction and travel remain valid.

Operating with the knowledge that no one is safe until the virus has been eradicated everywhere, European politicians also discussed the United Nations-back vaccination program COVAX noting the urgent need to get viruses to countries in need, namely in Africa but also in the Balkans.

Both von der Leyen and Michel laid great emphasis on the EU's generosity when it comes to its support for the global COVAX network to ensure poorer countries access to vaccines. The EU is the program's biggest donor.