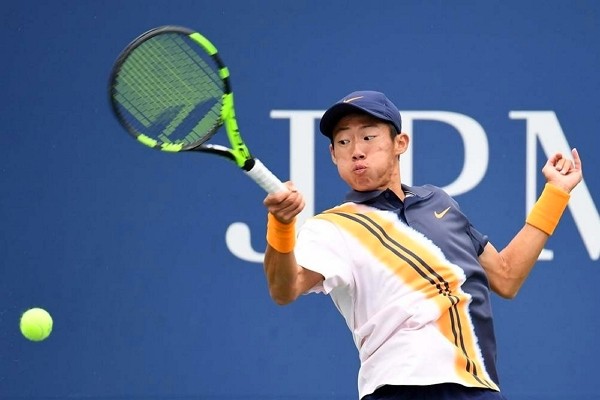 TAIPEI (Taiwan News) — Taiwanese tennis player Tseng Chun-hsin (曾俊欣) said Tuesday (Feb. 23) that he and his father had been forcefully detained at an airport in Serbia this week due to a mix-up with their visas.

Sharing their unpleasant experience on social media, the 19-year-old Tseng said he and his father had been transferring at an airport in Serbia on Sunday (Feb. 21) when immigration officers refused to recognize their electronic visas and insisted that they provide regular paper visas. He said that while he was in South Africa for the ATP Challenger Tour tournament, the Serbian representative in the country had assured them their e-visas were sufficient for entry.

Tseng said 10 airport security officers had forcefully placed them in a cold, dimly lit room with only a few metal chairs and cigarette butts on the floor. He said that none of the other people in the room were wearing face masks and that they were left with no water or heat for more than 24 hours.

After enduring the poor treatment, Tseng and his father were then told they had to fly to Istanbul and wait three days at the airport before being transferred back to South Africa.

Luckily, Tseng and his father were offered assistance from Taiwan's representative office in Turkey after it learned about their situation. Office staff offered Tseng and his father hot meals and contacted Turkish Airlines to arrange a flight that would take them directly to Taiwan.

At 5:31 p.m. on Tuesday, the duo safely arrived at Taiwan Taoyuan International Airport. Tseng's father thanked the Ministry of Foreign Affairs (MOFA) for its help and said they were much relieved after it had stepped in, reported CNA.

Speaking at a press conference later that day, MOFA Spokesperson Joanne Ou (歐江安) emphasized that it is the ministry's responsibility to provide the necessary care and emergency assistance to all Taiwanese abroad. She also reminded Taiwanese citizens traveling to Serbia that they must present a visa and proof of a negative COVID test issued within 48 hours of their flight.