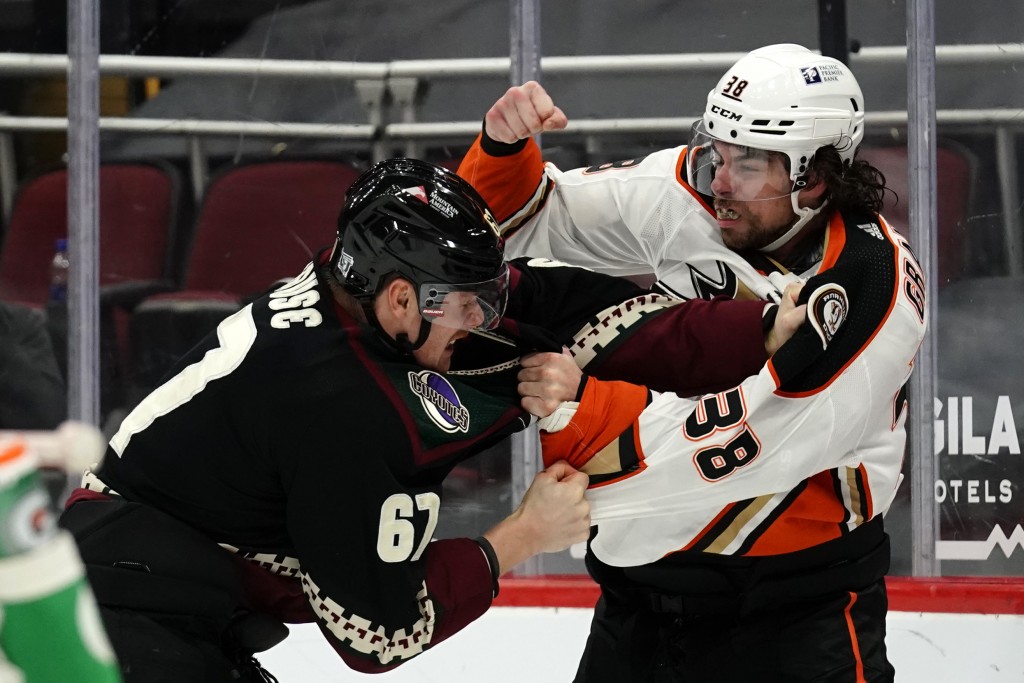 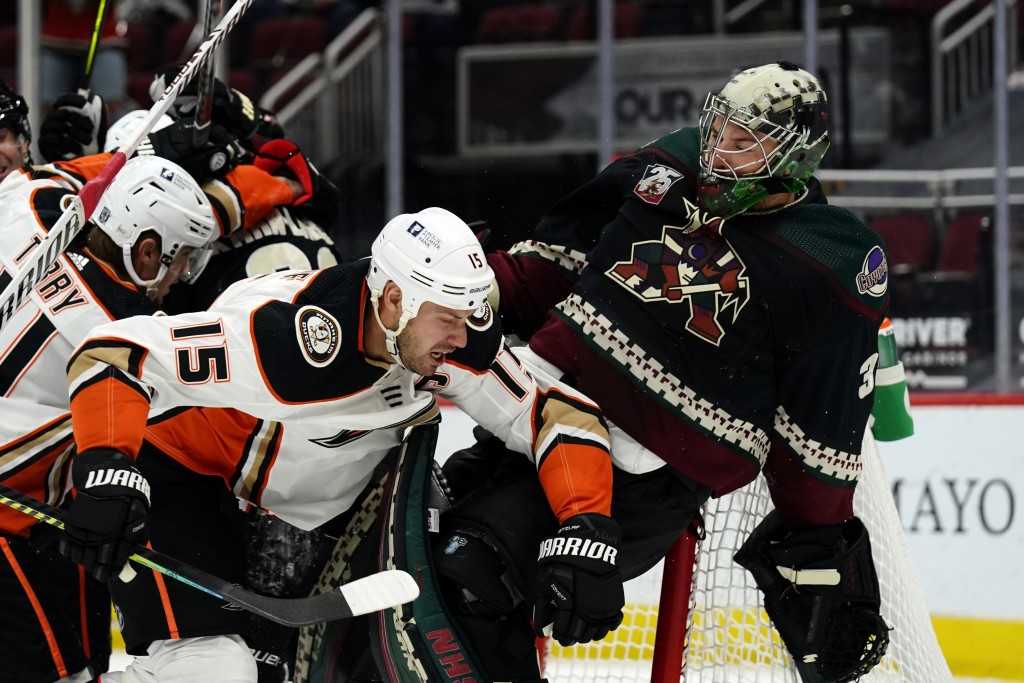 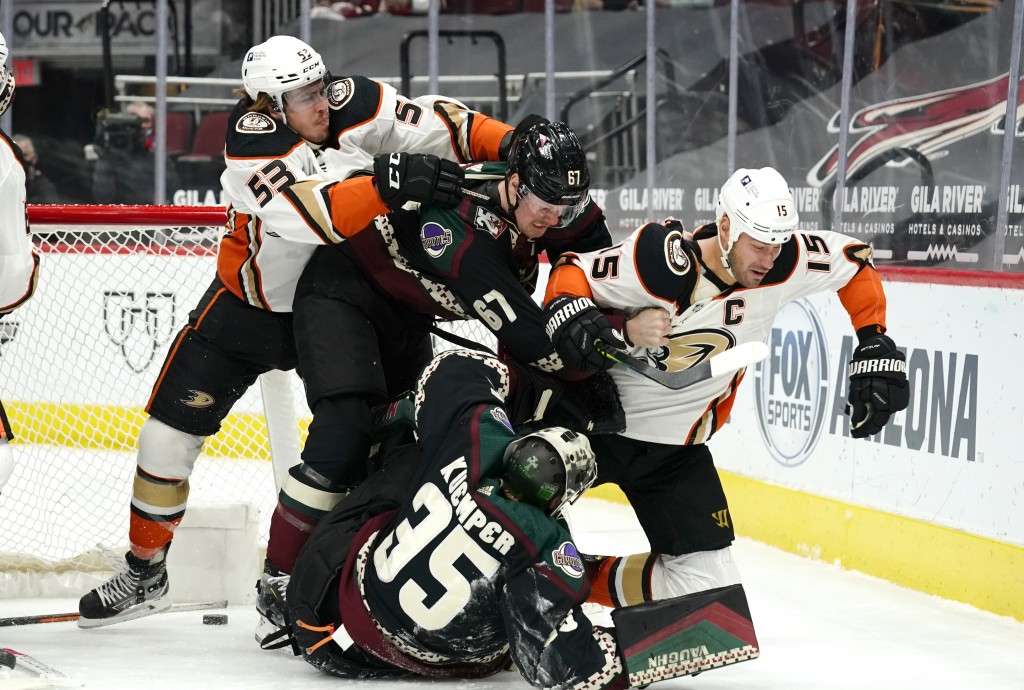 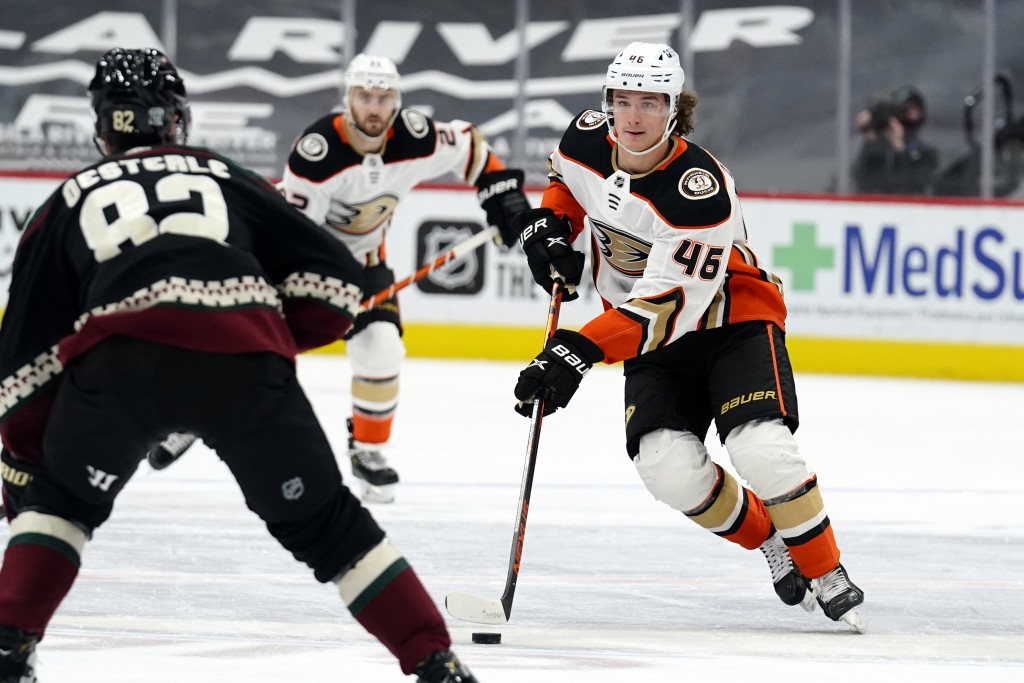 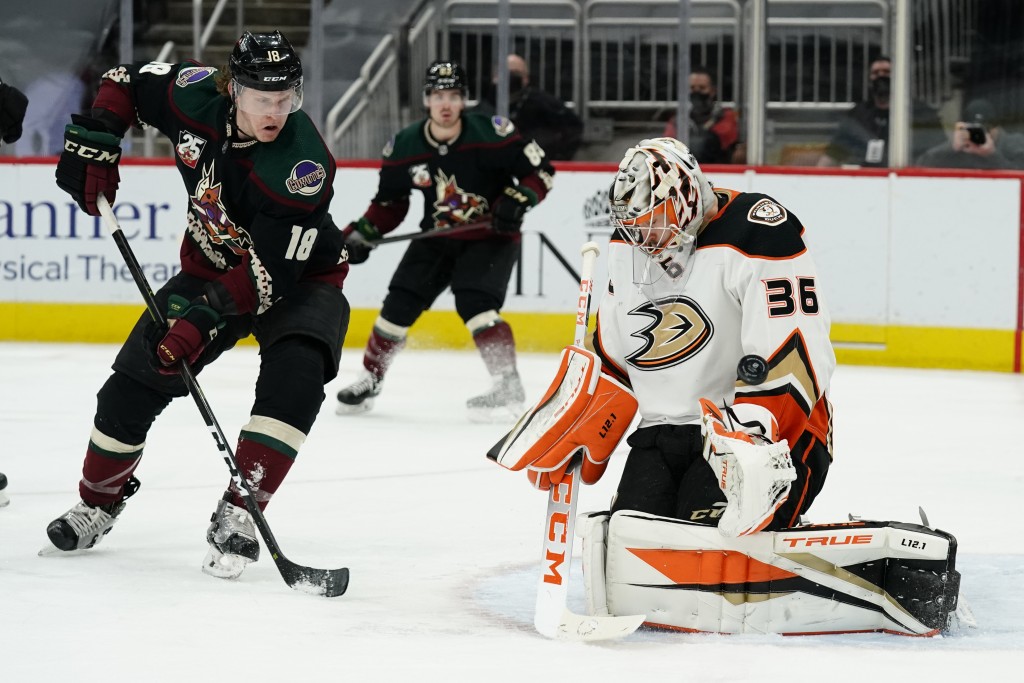 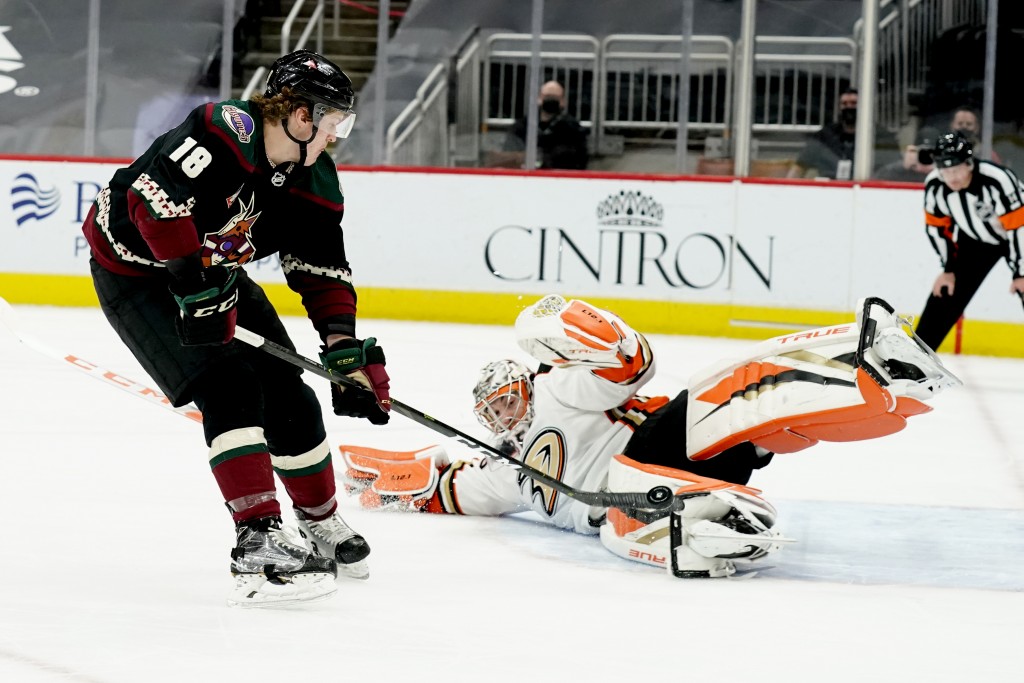 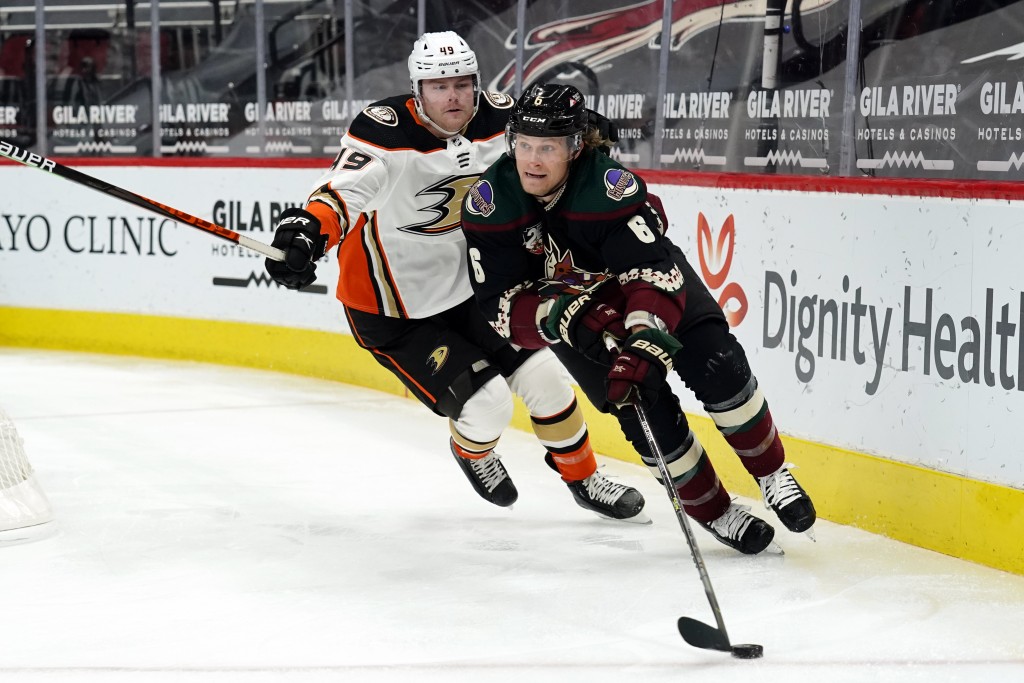 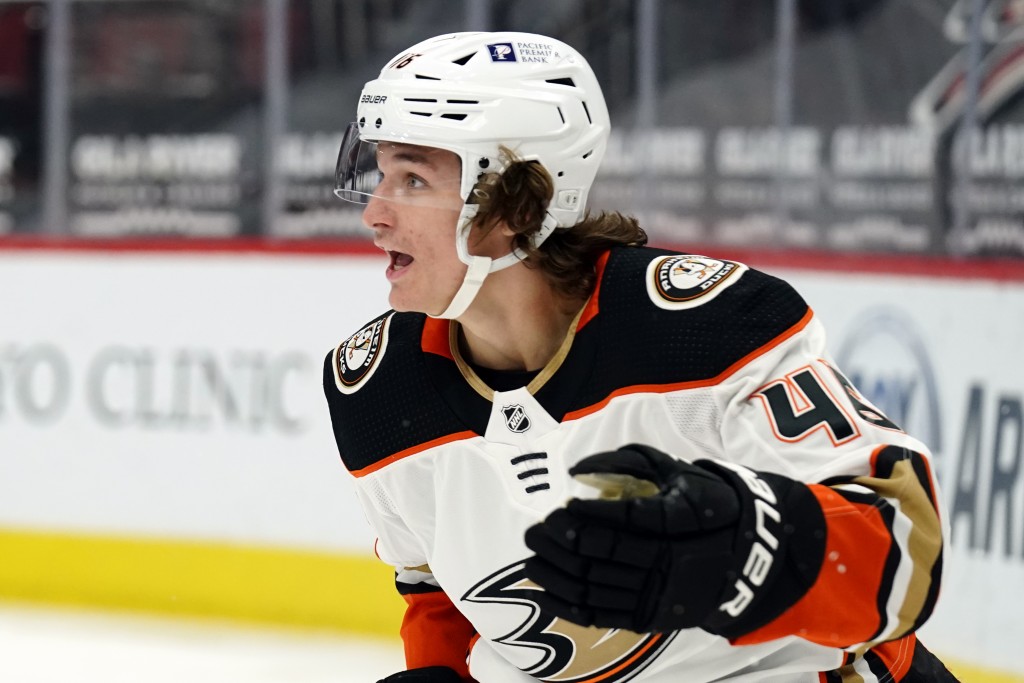 The buzz heading into the game was the much-anticipated debut of Anaheim top prospect Trevor Zegras.

Big hits, flying fists and bunches of goals became the focus once the puck dropped.

Arizona goalie Darcy Kuemper was among five players penalized during a lengthy melee that set the physical tone early. The first period ended with two fights and the teams combined for 46 penalty minutes overall.

The Ducks, the NHL's lowest-scoring team, scored twice in the opening period and had a 3-0 lead early in the second.

Arizona stormed back to tie it in the second period with three goals in less than four minutes and went ahead in the third on Dvorak's second goal.

Jakob Chychrun had a goal and an assist for Arizona. Derick Brassard also scored and Kuemper stopped 24 shots.

Anaheim arrived in the desert with an NHL-low 33 goals, but didn't need much time to get its first one against Arizona. Silfverberg scored three minutes in, beating Kuemper between the pads after stealing the puck from Johan Larsson.

Jones scored on a two-man advantage later in the period to make it 2-0 and set off a melee by standing over fallen Arizona defenseman Oliver Ekman-Larsson. Kuemper came to his captain's defense and five players ended up in the penalty box, including three Coyotes.

Jones fought John Hayden later in the period, then Arizona's Lawson Crouse and Derek Grant dropped the gloves in the closing seconds.

The teams combined for 38 penalty minutes in the opening period.

Fowler made it 3-0 in the first two minutes of the third period with a shot through a screen.

Then it was Arizona's turn to score.

Dvorak beat Gibson on a penalty shot after Silfverberg hooked him on a short-handed breakaway. It was the third short-handed penalty-shot goal in Coyotes' history.

Brassard pulled Arizona within 3-2, one-timing a pass from Conor Garland two minutes later. Chychrun tied it less than two minutes after that, beating Gibson glove side before bowling him over.

Dvorak gave Arizona its first lead — on a power play, of course — by redirecting a shot by Chychrun early in the third period.

Kuemper made some big saves down the stretch to seal it.

Anaheim and Arizona play again on Wednesday in what's sure to be another testy game.