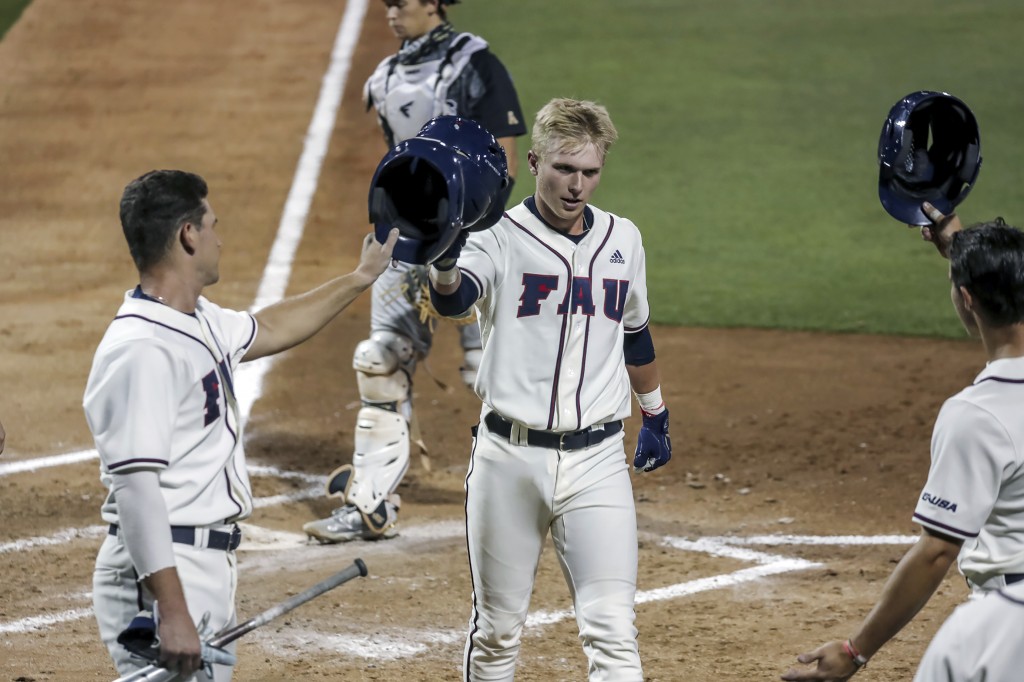 Caleb Pendleton didn't play in Florida Atlantic's season opener and didn't know he would be in the lineup for the next night's game until he arrived at the ballpark.

Less than 48 hours later, he was the toast of college baseball while working his way through a list of a dozen interview requests before heading to practice.

“It's been crazy,” Pendleton said. “I never thought on Friday night going into this weekend I would be sitting here on Monday with all this going on. It’s been very surreal.”

Surreal is what Pendleton did Saturday in Boca Raton, Florida. The freshman catcher became the eighth Division I player to hit two grand slams in one inning and first to do it in the first two plate appearances of his career.

“In high school, I didn’t hit any home runs my senior year, and my junior year I hit one,” said Pendleton, who grew up in Jensen Beach, Florida. “In travel ball, I hit two or three. I got a little more power coming to FAU, being on the weight program, and getting bigger and stronger has helped me a lot.”

Batting in the eighth spot against Central Florida, Pendleton came up with none out and bases loaded in the second inning and launched Hunter Patteson's 1-2 hanging curveball over the left-field fence.

About 15 minutes later, Pendleton was at bat again facing reliever Zack Bennett with two outs and the bases loaded.

“I kind of thought to myself, ‘I could do it again,' ” he said. “I kind of tried to clear that thought as fast as possible and be focused on the at-bat and not do too much and pass the torch, maybe hit a base hit and drive in a run or two and keep it going.”

Bennett served up a first-pitch, belt-high fastball that Pendleton turned on and sent out to left for another slam in the 12-run inning.

Pendleton went hitless on his other three at-bats and finished with eight RBIs in the Owls' 20-15 series-clinching win. He didn't play Sunday as FAU lost 15-6.

All the attention is nice, Pendleton said, but he's ready to move on to Tuesday's game at Florida Gulf Coast.

“It's about trying to keep the pressure off myself,” he said, “and just playing my game.”

There's no longer consensus at the top of the polls. Miami's series win at preseason No. 1 Florida took care of that.

The Hurricanes (2-1) topped the Collegiate Baseball newspaper rankings Monday. Mississippi (2-0), which knocked off top-10 opponents TCU and Texas Tech in Arlington, Texas, is No. 1 by Baseball America. D1Baseball.com was waiting until Tuesday to put out its rankings because a number of Monday games could have a bearing.

Oregon State's Preston Jones reached base seven times in a 20-4 win over Gonzaga on Sunday.

Jones tripled in the first and second innings, singled in the third and fifth and walked on his final three plate appearances.

San Francisco's Nino Giarratano picked up the 600th Division I coaching win. He earned it Sunday with the Dons' 8-3 victory at No. 2 UCLA, which clinched San Francisco's first series win against the Bruins.

“I think I’ll always remember this one,” Giarratano said. “I won’t have a problem recollecting I was at UCLA on a Sunday to win the series.”

The Bruins didn't throw ace Zach Pettway in any of the games. Coach John Savage told the Daily Bruin that Pettway had “a little minor setback in the fall.” Pettway is expected back soon.

Omaha, which became a full-fledged Division I program in 2016, beat a ranked opponent for the first time Sunday with a 6-3 win at Oklahoma, which was as high as No. 22 in the polls.

Georgia State picked up its first win over a ranked opponent since 2018 when it swept a Saturday doubleheader against West Virginia, which was as high as No. 14.

Air Force won 6-5 at LSU on Sunday, its first victory over a top-10 team since 2010. It also was Falcons coach Mike Kazlausky's first win over LSU's Paul Mainieri, who coached Kazlausky at Air Force and hired him as an assistant at the academy in 1993.

SERIES OF THE WEEK

The Tigers opened with a three-game sweep of Cincinnati. Clemson starters Davis Sharpe and Ty Olenchuk combined for 9 2/3 scoreless innings Friday and Saturday.