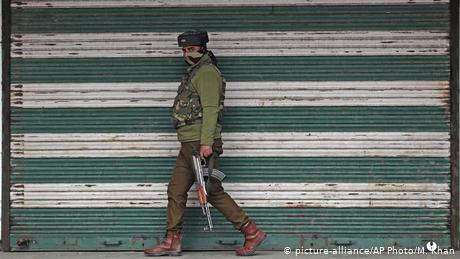 In August 2019, New Delhi revoked the special status of Indian-administered Kashmir and split the region into two union territories directly governed by the federal government. Prime Minister Narendra Modi's government also removed protections for locals with regard to land acquisition and jobs in Kashmir.

Authorities imposed a strict curfew in the region and shut down the internet after they abrogated Kashmir's semiautonomous status, with the aim of preventing protests. The government lifted the lockdown last year and restored the internet, but it has maintained a heavy deployment of security forces in the region.

India recently invited an international group of 24 envoys to Jammu and Kashmir as part of efforts to showcase "normalcy" there.

There have been sporadic protests and violent incidents against New Delhi's Kashmir measures, but there haven't been mass demonstrations that could pose a challenge to Modi.

Muslim-majority Kashmir has been divided between India and Pakistan since they became independent countries in 1947. Both countries claim the region in its entirety. Insurgents in Kashmir have been fighting Indian rule since 1989. Some estimates suggest more than 70,000 people have been killed in the armed conflict.

Siddiq Wahid, a historian and political analyst, says that Kashmiris fear serious repercussions if they raise their voice against New Delhi.

"After the August 2019 move, authorities increased the military presence in what was already considered the world's most militarized region. I think this is one of the reasons behind a relative silence in Kashmir," Wahid told DW.

A report released earlier this month by the Forum for Human Rights in Kashmir said that although 12,000 of the 38,000 additional troops deployed to enforce the lockdown had been withdrawn, "arbitrary detentions continue and public assembly is still prohibited under Section 144 of the Code of Criminal Procedure 1973."

Hundreds of people, including minors and several elected legislators of Jammu and Kashmir, remain under preventive detention, it said.

"People are scared to speak against the August 2019 decision," Mushtaq Rather, a local shopkeeper, told DW, adding that those who try to resist the government end up in jail.

Aijaz Dar, a Srinagar resident, criticizes the Kashmiri leadership for not standing up to New Delhi.

"When the decision [to strip Kashmir off its special status] came, they didn't fight back. Separatist leaders, the Bar Association and even the civil society allowed New Delhi to implement their decisions," Dar told DW.

Meanwhile, the authorities have continued their crackdown in Kashmir, arresting thousands of people, including the region's three former chief ministers. In the past three months, more than 100 politicians and separatist leaders have been detained in a fresh drive to "prevent violence."

"Separatists and their supporters are afraid because New Delhi is using force against them and their families. Authorities have also disrupted the ability of civil society groups to organize demonstrations," Riyaz Wani, a Kashmiri political analyst, told DW.

Muhammad Yusuf Tarigami, a senior member of the Communist Party of India (Marxist), says the silence in Kashmir does not mean that Kashmiris have accepted New Delhi's measures.

According to a separatist leader, it is fatigue more than fear that has prevented Kashmiris from holding mass demonstrations.

"In the past 10 years, Kashmiris have experienced many shutdowns. Since 2016, when separatist commander Burhan Wani was killed, the shutdowns have wrecked the region's economy," he told DW on condition of anonymity.

Even 18 months after the abrogation of Kashmir's special status, people remain anxious about their future.

Analyst Wahid says he is confident that people have not accepted New Delhi's decisions. "Those who are resisting the government knows that they need to work out a new strategy. It may take some time," he says.