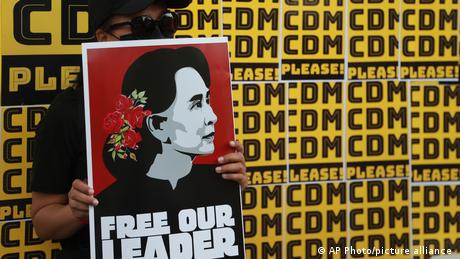 The European Union is poised to impose sanctions against the military leaders in Myanmar, according to a joint statement released after EU foreign ministers met in Brussels on Monday.

The statement came as protesters in Myanmar continued to take to the streets despite a deadly crackdown by military and police forces. At least three protesters have died since Friday, and the military has reported that one policeman had also lost his life.

On Monday, the EU said it was "ready to adopt restrictive measures targeting those directly responsible for the military coup and their economic interests."

The bloc also called for a "de-escalation of the current crisis" that began on February 1 when the military overturned the democratic election results in Myanmar and took control of the country.

German Foreign Minister Heiko Maas said that the bloc would use any diplomatic means necessary to ensure de-escalation of the conflict in Myanmar.

Global leaders call on military to step aside

The EU also called for the immediate and unconditional release of Aung San Suu Kyi and the ousted president Win Myint as well as others who had been detained during the military coup.

Other world leaders also spoke out against the military regime as protesters also gathered in the streets on Monday, a day after the US Secretary of State Anthony Blinken expressed explicit support for the protesters over Twitter.

The UK foreign minister, Dominic Raab, told the UN Human Rights Council that the situation in Myanmar was deteriorating.

He also laid out demands for the junta to relinquish power. "The military must step aside. Civilian leaders must be released. And the democratic wishes of the people of Myanmar must be respected," he said.

UN chief Antonio Guterres also called on the generals to hand power back to the civilian government.

"I call on the Myanmar military to stop the repression immediately. Release the prisoners. End the violence. Respect human rights and the will of the people expressed in recent elections. Coups have no place in our modern world," Guterres said.