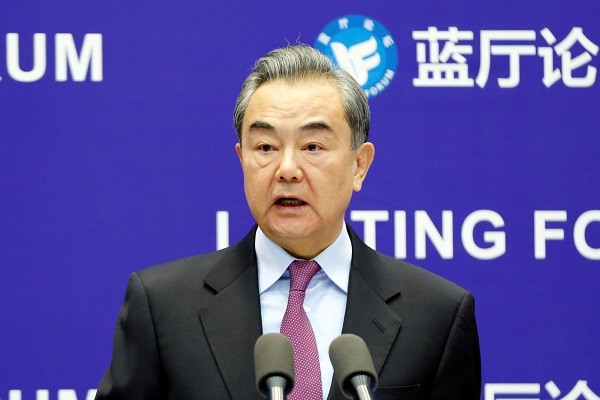 Wang spoke at the Chinese Ministry of Foreign Affairs' annual Lanting Forum on Sunday (Feb. 22). Prefacing the address with the thought that the "hopes of spring are just around the corner," he made an appeal to the U.S. to restore the frayed Sino-American ties and explained what the Chinese Communist Party (CCP) would expect in order for the relationship to work.

As "major countries," the two sides have an obligation to "work together for the common good of humankind," he stated, citing the looming issues of climate change, economic recession, and the ongoing COVID-19 pandemic.

The diplomat referred to Joe Biden's first phone call with Xi Jinping (習近平) as president on Feb. 10, saying Xi had expressed in the call China's line that it pursues relations based on "no conflict, no confrontation, mutual respect, and win-win cooperation." He also said the two leaders had agreed it's important to "enhance mutual understanding and avoid misperception and miscalculation," deal candidly, and "unclog communications channels and facilitate exchange and cooperation."

Wang said bilateral relations had "deviated from the normal track," which he attributed to cynical efforts by the Trump administration to "suppress and contain" China just to score political victories. He added that in order to return to where they should be, the "walls of misperceptions must be torn down."

Wang proceeded to make the extraordinary claim that authoritarian China "is a country that always upholds and promotes democracy." When it comes to democracy, "there is no fixed model or standard answer," he added, and the CCP administers a system "by the people" and grounded on "law-based governance."

Appealing to the U.S. to accept China's version of democracy in future dealings, he also stressed the need for countries to stay out of each other's internal affairs. For emphasis, he quoted the Golden Rule and said, "A good-mannered gentleman never thrusts his knife and fork into the food on someone else's plate."

"We urge the United States to stop smearing the [CCP] and China's political system, stop conniving at or even supporting the erroneous words and actions of separatist forces for 'Taiwan independence,'" Wang said. He also warned the Biden administration to adopt a hands-off policy toward Hong Kong, Xinjiang, and Tibet.

"Places inhabited by ethnic minorities, such as Xinjiang and Tibet, have stood out as shining examples of China's human rights progress," he claimed.

The Biden administration has expressed it will uphold U.S. commitments to Taiwan, including by contributing to its self-defense capabilities through weapons sales. It has also continued to criticize the Chinese government over its actions in the Xinjiang region, where Muslim minorities have reportedly been subject to abuses ranging from mass internment in camps to forced sterilization.

Asked at Tuesday's (Feb. 23) press briefing at the U.S. State Department whether the U.S. had begun working with China on issues of shared concern such as those identified by Wang, department Spokesperson Ned Price said, "I think [Wang's] comments reflect the continued pattern of Beijing's tendency to avert blame for its predatory economic practices, its lack of transparency, its failure to honor its international agreements, and its repression of universal human rights." Price said the U.S. will continue defending human rights in China, including in Hong Kong, Tibet, and Xinjiang, and reiterated Secretary Blinken's previous statement that the U.S. would "approach China from a position of strength" in tandem with its allies.

Meanwhile, Taiwan bristled at China's demand that the U.S. discontinue official relations with it. Taiwanese Ministry of Foreign Affairs Spokesperson Joanne Ou (歐江安) said China, which in recent years has redoubled its efforts to isolate Taiwan in the international arena, "will not change Taiwan's resolve to reach out to the world."