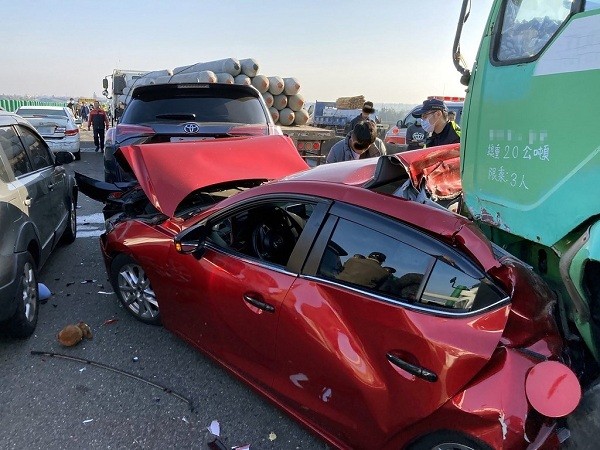 A highway traffic accident involving 20 vehicles on Sunday morning that caused two deaths and injured eight others was caused by heavy fog in the area, according to police.

The fatal accident occurred around 7:30 a.m. on Provincial Highway No. 61 (Taiwan West Coast Expressway), near the borders of Chiayi and Yunlin counties, at the northbound 254 kilometer mark, the Chiayi County Fire Bureau said.

Seven large trucks, including one that was transporting liquefied petroleum gas tanks, and 13 cars were involved in the accident.

A man surnamed Lin (林) was found dead at the scene, while a woman surnamed Li (李) had no vital signs and was rushed to the hospital, where she was later pronounced dead, according to the fire bureau.

Eight others involved in the accident, who were conscious, were also sent to hospitals, though officials did not say how severely they were injured.

One of the injured told reporters that there was heavy fog in the area at the time and they could not see clearly as they drove downhill on the freeway.

Yen Wei-cheng (顏偉丞), the head of the Yunlin County Police Bureau's Beigang Precinct, later said that the fog was indeed the cause of the accident, though the police will still investigate further to ascertain which drivers are liable.

Yen urged drivers to slow down and maintain a safe distance with nearby vehicles when driving in the fog.