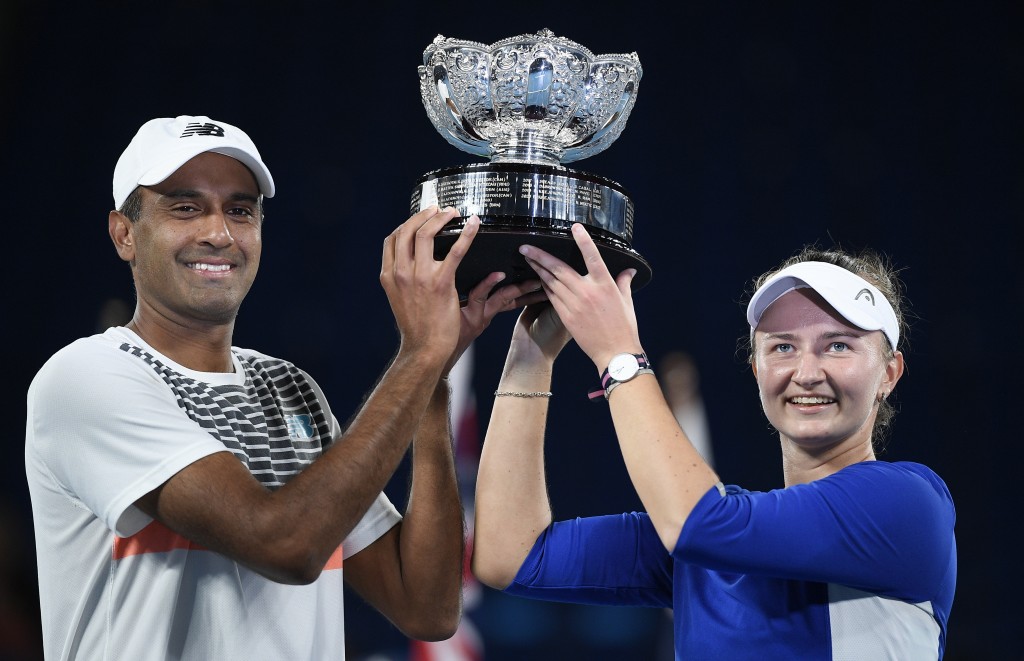 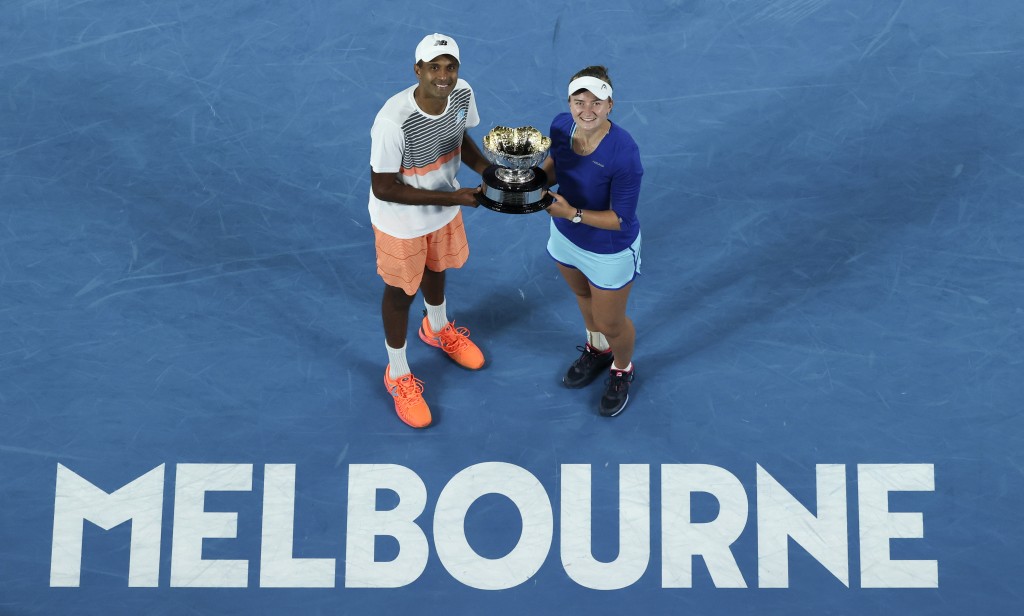 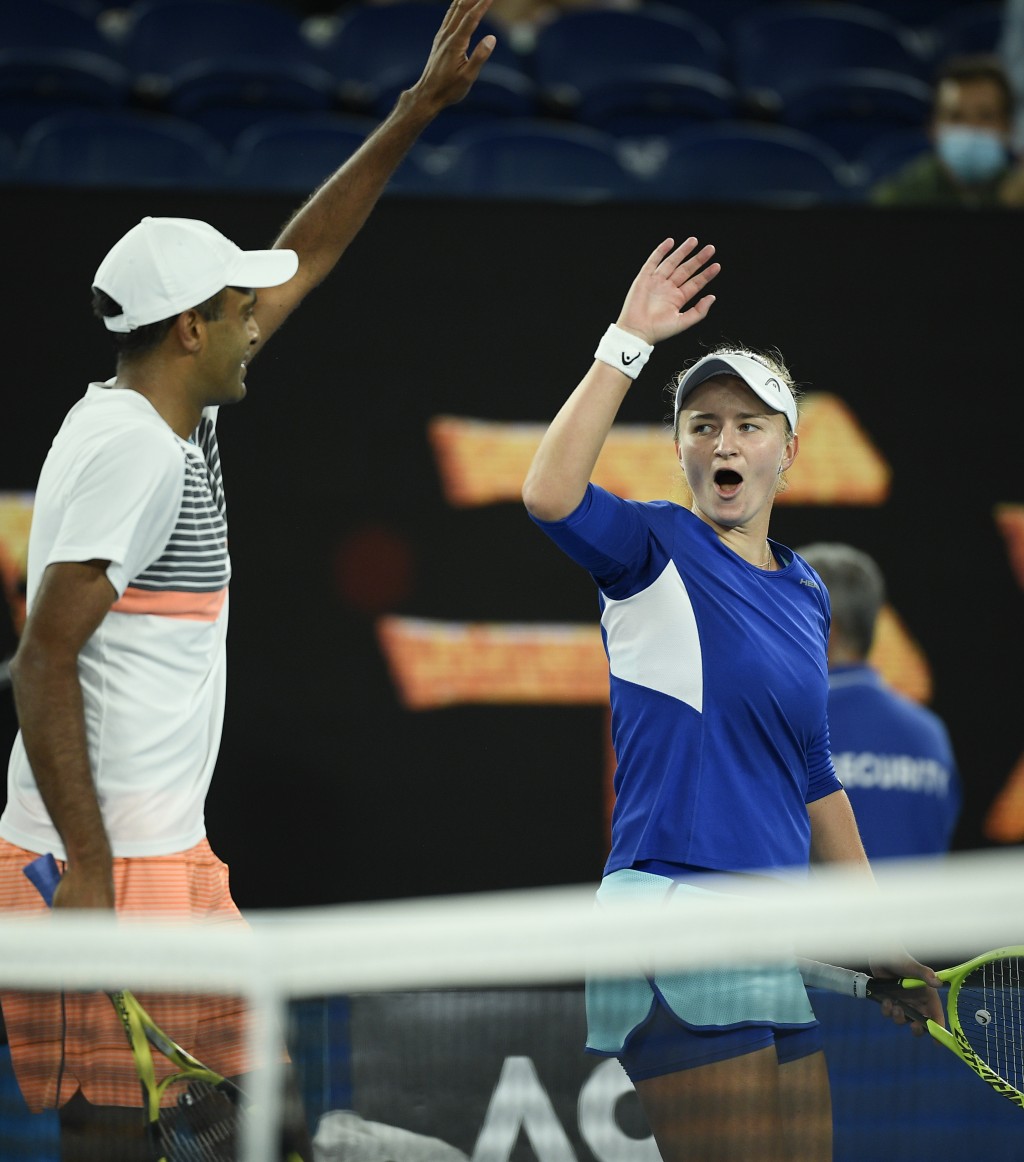 MELBOURNE, Australia (AP) — Barbora Krajcikova and Rajeev Ram have made the perfect odd-year pairing at the Australian Open, adding the 2021 mixed doubles title to the one they shared in 2019.

For Krajcikova, it's three in a row.

She and Ram were in control from the start in a 6-1, 6-4 win Saturday over Australian wild cards Matt Ebden and Sam Stosur.

“It’s an amazing feeling,” Krajcikova said. “I’m so grateful that we were able to get back together.”

“We had a year off as a team, but she didn’t have a year off — she won this thing last year, so that’s three years running for her,” Ram said. “Amazing job. Pleasure to play with her, always."

It was a virus — not related to COVID-19 — that temporarily broke up the successful partnership a month prior to the 2020 Australian Open.

“I was sick here in December that year and I didn’t think it was a good idea to try to play mixed doubles as well,” said Ram, who won the men's doubles title last year with Joe Salisbury.

That puts him in contention for a doubles double at Melbourne Park. The 36-year-old American and Salisbury will be trying to defend the title in the doubles final Sunday against Croatia’s Ivan Dodig and Slovakia’s Filip Polasek.

Krajcikova missed her chance at a double when she and fellow Czech Katerina Siniakova lost the women’s doubles final on Friday to second-seeded Elise Mertens and Aryna Sabalenka.

She said she put that out of her mind as soon as possible, aiming for another title.

Krejcikova and Ram faced only a single break point and needed less than an hour to beat Ebden and Stosur, who were each previous winners of the title but with different partners.

When Ebden held serve to finally get the Australian pair on the scoreboard in the fifth game, it was still a long way back into the opening set. It proved too much, with Krejcikova and Ram wrapping it up in just 22 minutes.

Fans, who had stayed after Naomi Osaka's win over Jennifer Brady in the women’s singles final hoping to witness a home Slam triumph, vocally tried to lift Ebden and Stosur. But it was to no avail.

The Australian pair cut down their errors in the second set and seemed to be getting back into the match but when Ram held serve easily in the ninth game, it put the pressure immediately back on Ebden’s serve.

Another couple of errors left Ebden and Stosur staring at a match point. And when Ebden pulled a forehand wide after a long baseline exchange, it was all over in just 59 minutes.

Krajcikova said the partnership with Ram works because of their approach to the game.

“I just feel we understand each other on and off the court," she said. “He’s just really easygoing and it works out.”