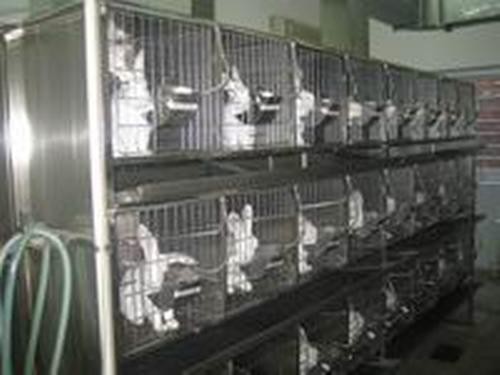 TAIPEI (Taiwan News) — Ferret-badgers and rabbits — "natural hosts" that a World Health Organization (WHO) inspector says could have been vectors for the first transmission of COVID-19 to humans — were experimented on at the Wuhan Institute of Virology (WIV).

In an interview with The Wall Street Journal published on Thursday (Feb. 18), British zoologist and EcoHealth Alliance President Peter Daszak backed China's theory that frozen meat could have brought the coronavirus to Wuhan. After pangolins and mink were dismissed by many researchers as vectors for human transmission, Daszak claimed ferret-badgers and rabbits could instead have transmitted the disease at Wuhan's Huanan Seafood Wholesale Market.

China's claim that the coronavirus is easily spread through frozen food has been challenged by the U.S. Food and Drug Administration (FDA), which says there is "no credible evidence" that COVID-19 is transmitted through contaminated food or food packaging.

Furthermore, there are no independent reports of anyone contracting COVID-19 through frozen foods, according to Alina Chan, a molecular biologist at the Broad Institute of MIT and Harvard. "There have been zero well-documented cases where a human has been infected by a respiratory pathogen from frozen packaging or meat."

As for the wet market, Liang Wannian, head of the Chinese National Health Commission's Expert Panel of COVID-19 Response, stated that no animals or "animal products" had tested positive for the virus there and that early cases of individuals contracting COVID had not visited the market.

Even so, Daszak claimed that ferret-badgers provide "a pathway for how the virus could have gotten into Wuhan," and their carcasses were found in the wet market's freezers. He conceded, however, that all those carcasses had tested negative for the virus.

In the joint China-WHO report issued on Feb. 9, Liang stated that 50,000 samples of wild animals from 300 different species (including bats) as well as 11,000 farm animals in 31 Chinese provinces — taken between November 2019 and March 2020 — had all tested negative for SARS-CoV-2.

Meanwhile, an Australian geneticist who publishes scientific papers under the name Zhang Daoyu told Taiwan News in an email that the ferret-badger ACE2 receptor cannot bind to the S1 subunit of the spike protein. He added that animals cannot be infected with the disease in-vivo, and adaptations in them give a very different receptor-binding motif (RBM) than what is currently seen in SARS-CoV-2, the virus that causes COVID-19.

Another of Daszak's claims is that rabbits were sold at the wet market and the animals "turn out to be quite susceptible to SARS-CoV-2." However, Zhang said that since the currently observed RBM of SARS-CoV-2 does not efficiently use ferret-badger ACE2 and is not optimal for binding to rabbit ACE2, this rules out the possibility the virus may have "naturally" adapted to these two species.

"Transmission could occur in a laboratory with mice or rabbits that had been genetically modified to express the human ACE2 protein and had severe combined immunodeficiency (SCID)," Zhang said. He added that even this is unlikely "since the current RBM is not optimal to rabbit ACE2 binding, and a history of either ferret-badger or rabbit ACE2 adaptation would have resulted in very different RBM than observed." An open-source intelligence consultant who asked to remain anonymous told Taiwan News they had uncovered scrubbed webpages from the WIV that describe in detail the rabbits, ferrets, mice, rats, and other animals that have been experimented on at the facility for decades. An introduction to the WIV's Laboratory Animal Center, which has been scrubbed from the internet, states the building was constructed in 1999 and received a license to house rabbits, rats, and mice in 2005.

An archived version of the deleted webpage states the rabbit laboratory has 96 cages. It boasted that its lab for rats and mice can carry out experiments on 1,600 to 1,800 mice at the same time. In an archived view, the WIV introduction page states the institute had "three sets of barrier facilities" covering 1,216 square meters. It then itemizes the cages it houses for lab animals, including "126 cages for Japanese white rabbits, 340 cages for SD and Wistar rats, 3,268 cages for inbred strains, closed groups, mutant strains and genetically engineered mice, 12 cages for ferrets, 12 cages for bats, 2 species of cotton bollworm and beet armyworm, totaling 52 strains."

In an archived version of a deleted page from the WIV, the Center for Emerging Infectious Diseases Director, Shi Zhengli (石正麗) — also known as "Bat Woman" — bestowed an award on Dr. Hui Zeng from the American CDC in 2013 for using ferrets as an animal model for infectivity. Specifically, the focus of her work was using the ferret "as a model to introduce the infection, pathogenicity, transmission and immune response of influenza disease in depth." In 2020, An Xuefang (安學芳), director of the WIV's Laboratory Animal Center; Wu Jia (吴佳), head of laboratory safety for the WIV's BSL3 facilities; and Tang Hao (唐浩), a bioengineer who has worked at the WIV since 2010, all gave presentations at a conference sponsored by Beijing Huironghe. The title of the event was "Biosafety Laboratory Management and Experimental Technology Training Course."

In an archive of the company's deleted press release, it stated that "Beijing Huironghe Technology Co., Ltd. has been deeply involved in the field of inhalation toxicology for many years." As a "special sponsor," the company demonstrated its "main oral and nose inhalation exposure systems."

One of the animal inhalation systems displayed on an archived page of the company's website is a tube used to expose ferrets to various aerial substances. What Daszak does not mention is that in 2019, a member of Shi Zhengli's team, assistant researcher Hu Ben (胡犇), embarked on high-risk GOF research on coronaviruses and chimeras in humanized mice at WIV. According to a researcher who goes by the pseudonym Billy Bostickson, and who is in contact with Taiwan News: "This research involved 'novel' bat coronaviruses inoculated into immuno-suppressed mice with humanized features, such as hACE2, and possibly humanized lungs, bone marrow, etc..."

No information about this research has been released to the public since the start of the pandemic, including data on the eight chimeric viruses WIV had been infecting the mice with. In fact, all the WIV institute's databases have been offline since the start of the pandemic for alleged "cybersecurity issues," including 100 unpublished sequences of bat betacoronaviruses, which need to be sequenced by international scientists, according to Bostickson.