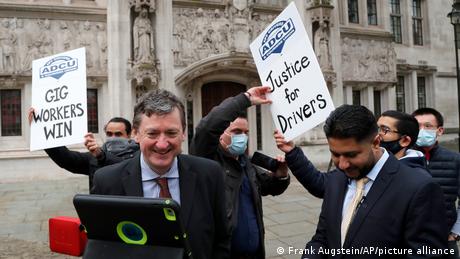 A group of Uber drivers in the United Kingdom is entitled to labor benefits and they are recognized as "workers" rather than self-employed operators, the UK Supreme Court ruled on Friday.

The decision threatens the ride-hailing company's business model that thrives on minimal commitments towards drivers.

Members of the group of Uber drivers in the case are now entitled to paid holidays and a minimum wage.

What is the case against Uber?

The long-running legal battle concluded with the Supreme Court's seven judges rejecting Uber's appeal to a lower court's previous decision that classified the drivers as "workers" under British law.

"The employment tribunal was right to find that Uber drivers are workers who therefore qualify for the rights conferred on workers by employment legislation,'' said judge George Leggatt, reading out a summary of the ruling on a court livestream.

"Drivers are in a position of subordination and dependency to Uber," the court said

The judges added that the only way drivers could improve their financial status was through "working longer hours while constantly meeting Uber's measures of performance."

How did Uber respond?

The multi-national company said in a statement that it respected the court's decision but argued that it was based on a small number of drivers who used the Uber app in 2016.

"Since then, we have made some significant changes to our business, guided by drivers every step of the way,'' Jamie Heywood, Uber's regional general manager for northern and eastern Europe, said in a statement. "These include giving even more control over how they earn and providing new protections like free insurance in case of sickness or injury.''

At least 60,000 drivers are actively working for Uber in the UK.

Is this a slam to the 'gig economy'?

"Tens of thousands of Uber drivers can now claim the right to be classed as workers after the Supreme Court handed down its judgment," the firm said in a statement.

Under the so-called gig economy, people could work for multiple companies on a job-by-job basis.

Labor unions have long criticized the business model and described it as exploitative, but businesses argue that it provides workers with more flexibility.