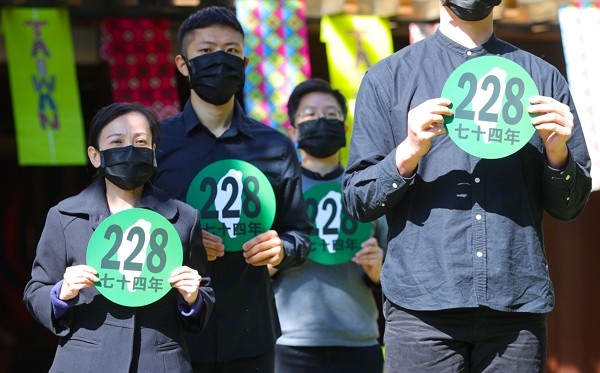 A coalition of over 50 civic organizations will march in Taipei on Sunday (Feb. 21) to remember the victims of the Feb. 28 incident and to protest against the lingering symbols of "authoritarianism" in Taiwanese society, the groups said Thursday.

The groups, including the Nylon Cheng Liberty Foundation, the Tsai Jui-Yueh Dance Foundation, and the Taiwan Association for Human Rights, held a press conference announcing this year's event under the theme "dismantling authoritarianism and building a new nation."

The procession, part memorial, and part political protest will set out at 2:28 p.m. from Tianma Teahouse in Taipei's Dadaocheng neighborhood, where the shooting that sparked the island-wide incident occurred in 1947.

It will then pass several other sites related to the incident, including the old Taipei branch of the Monopoly Bureau and the Taipei 228 Memorial Museum, before concluding at the Executive Yuan Building, which formerly served as the headquarters of the Taiwan Provincial Government, the groups said.

According to some estimates, tens of thousands of Taiwanese were killed by the Nationalist military in the crackdown on anti-government uprisings that began on Feb. 28, 1947, 16 months after Japanese colonial rule of the island ended.

The incident partly led to the government's imposition of martial law in Taiwan, which lasted nearly four decades.

During the press conference, the groups also issued a three-point declaration, in which they called for goals that went well beyond memorializing the victims and the redressing of injustices pursued by government-led organizations such as the Transitional Justice Commission.

Specifically, the declaration's first demand called for the dismantling of "authoritarianism" and the "liquidation" of the KMT and its related powers. (The English version of the declaration employed lighter phrasing, calling instead for a "complete, thorough reckoning of the deeds of the Chinese Nationalist complex.")

Asked to clarify the demand on Friday, Lîm Liû-sîn (林柔辰), a spokesperson for the groups, told CNA that they believe the KMT has never fully accounted for its crimes during Taiwan's authoritarian era and that while they do not realistically expect the party to cease to exist, "that would be the ideal."

Top figures from the KMT, including former Presidents Lee Teng-hui (李登輝) and Ma Ying-jeou (馬英九), have apologized for the party's actions during the incident and over the past 25 years regularly participated in government-organized memorial events. The KMT is currently Taiwan's main opposition party, representing around 40 percent of the total votes cast in last year's presidential election.

The groups' second demand urged the government to end its funding for symbols of Taiwan's authoritarian past, such as the Cihu Mausoleum, where former President Chiang Kai-shek (蔣介石) is buried, and Taipei's Chiang Kai-shek Memorial Hall.

Third, the groups called for the establishment of a "free, democratic new nation-state," which will "rejoin the global resistance against Chinese imperialism."

Aside from the march on Sunday, an official government event commemorating the 74th anniversary of the incident will take place in Kaohsiung on Feb. 28.