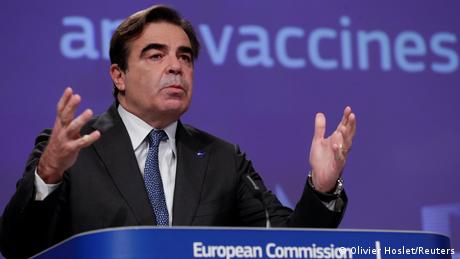 Hitting back at accusations that the EU had mismanaged the coronavirus vaccine rollout, Margaritis Schinas, a vice-president of the European Commission, said that blaming Brussels is "convenient" and makes headlines, "but it doesn't sort out the problems."

This week the bloc revealed plans to combat COVID-19 variants and speed up approval of new vaccines. On DW's Conflict Zone, host Tim Sebastian asked Schinas if the announcement was more than a PR exercise to boost an unfavorable image.

"It is the response to a genuine worry that we have both here in Brussels and in the capitals of our union, because the mutations are happening and these mutants are practically everywhere," said Schinas, a Greek politician and civil servant who previously served as a member of the European Parliament.

He also went on to defend the EU's actions and — helpfully for today's decision-makers — suggested it should be judged further down the line.

"I think the story has not been told of the European vaccination strategy. The success of our plan will have to be assessed not at the beginning of the process, but at the end of it," he said.

But the EU botched its strategy when, facing a squeeze on its own vaccine supplies, it attempted to control vaccines leaving the EU, which included plans to restrict their export across the politically sensitive land border between the Republic of Ireland and Northern Ireland.

"The measure was not related to Northern Ireland or Article 16 Protocol," said Schinas, whose portfolio as vice-president of the EU's executive body includes a number of internal and external security topics.

"The measure, which was a valid one, was a scheme for an export authorization procedure that would allow the Commission to know what's happening with vaccines produced in the European market."

But Schinas admitted there had been "a negative impact on the Northern Irish border, which was remedied, I would say instantly, on the same day."

The Greek politician said this had been solely an "administrative" mistake and blamed a need for speed, "because when you put in place an export authorization scheme, you don't have the time, a week or 10 days to organize things. You have to do it in a few hours."

EU foreign policy decisions must be made unanimously by the bloc and member states failed to agree even on a joint statement after the poisoning of prominent opposition figure Alexei Navalny.

"You are describing a [unanimity] situation which is given and on the basis of which we try to do as much and as best as we can," said Schinas.

"Let me remind you that we already have sanctions against Russia on the statute book," he said.

"But of course, we do not have qualified majority that would have allowed us to move differently. This is the situation, and we can spend time lamenting it or regretting it, but I don't think we can change it at this stage."

Brussels' recent investment deal with Beijing has also raised the hackles of many MEPs, who have criticized the deal over its apparent disregard of human rights issues in China.

"The European Union will continue to engage with China in a principled and at the same time pragmatic way," the commissioner told Sebastian.

Had the EU failed to use its leverage in the negotiations with Beijing? "We used it to the best possible outcome at a level comparable to what our American friends did when dealing with China," Schinas said.

"So, this was not something that failed our standards. We lived up to our standards. The references to ILO resolution, to child labor, [the] situation in Xinjiang, are clearly established."

The commissioner also said the deal was "not an apocalyptic new thing" and "was aligning European interests to a level of protection that other Western powers already enjoy with China."

But the deal has also put the EU at odds with the White House and US President Joe Biden's new administration, which expressed disapproval ahead of the agreement.