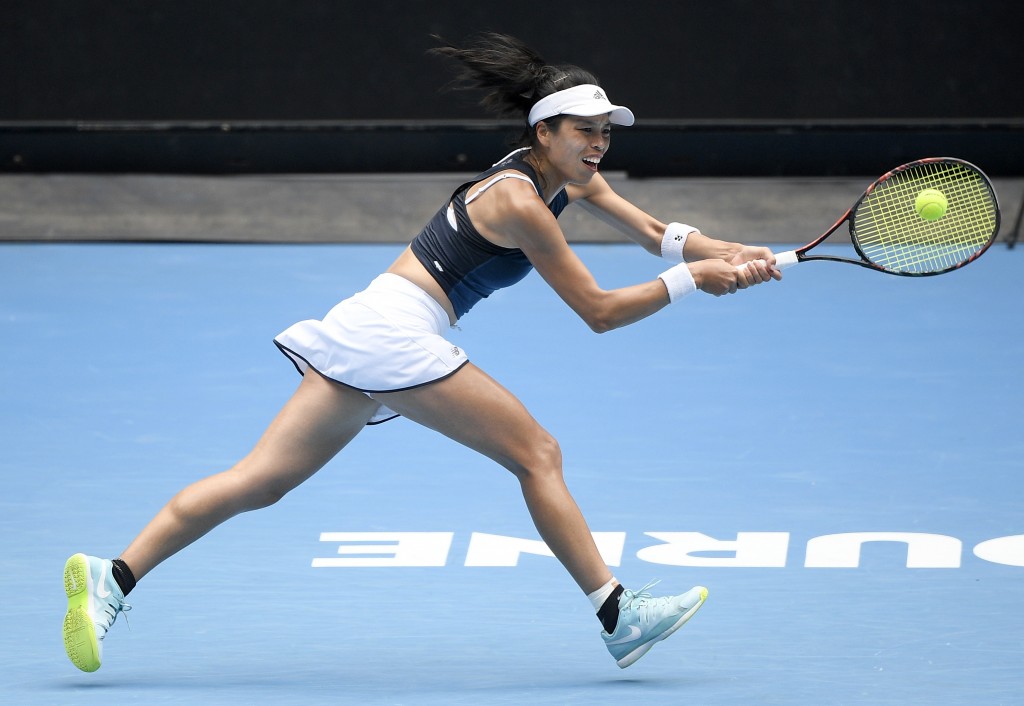 Hsieh Su-wei (謝淑薇) made history on multiple counts Sunday when she toppled 19th-seed Marketa Vondrousova of the Czech Republic to reach the quarterfinals of the Australian Open.

It took Hsieh just one hour and eight minutes to defeat the 2019 French Open finalist 6-4, 6-2 in a match in which she was never threatened.

"It was a little bit strange with the crowd, but it was a great win today because I finished in two sets. That's really good," she said after the match.

The Australian Open began on Saturday to play without spectators for at least five days after a COVID-19 outbreak in Melbourne led to a snap lockdown in the area.

Hsieh defeated the 21-year-old Czech in a warm-up event in Abu Dhabi in January but if she learned anything from that match she wasn't saying.

"I know I just played her but I totally didn't remember how she played so I was asking my team to give me some advice," the Taiwanese veteran said.
Hsieh broke Vondrousova in the first game of the match and again five games later to go up 5-2 in the first set. The Czech rallied briefly but Hsieh served out the set at love, and then grabbed control by taking a 4-0 lead in the second set.

Vondrousova was out of sorts throughout the match, her 31 unforced errors quite high for a match that only lasted 18 games.

Hsieh will next face a much tougher challenge in the quarterfinals, where world No. 3 Naomi Osaka of Japan awaits.

Hsieh's awkward style of play with her two-handed groundstrokes from both sides and unpredictable angles gave Osaka fits when the Taiwanese took Osaka to three sets at the Australian Open in 2019, and the Japanese knows what to expect.

"I think it's actually fun when I'm not really angry," Osaka said of playing Hsieh.

Osaka struggled to reach the quarterfinals, having to come back from breaks in the second and third sets and overcome two match points to defeat former No. 1 Garbine Muguruza 4-6, 6-4, 7-5.

Hsieh has a recent history of taking down top 10 players, defeating Johanna Konta, Muguruza, Simona Halep, Angelique Kerber, Karolina Pliskova, Osaka, Aryna Sabalenka and most recently in the second round of this Australian Open Bianca Andreescu, since 2017.