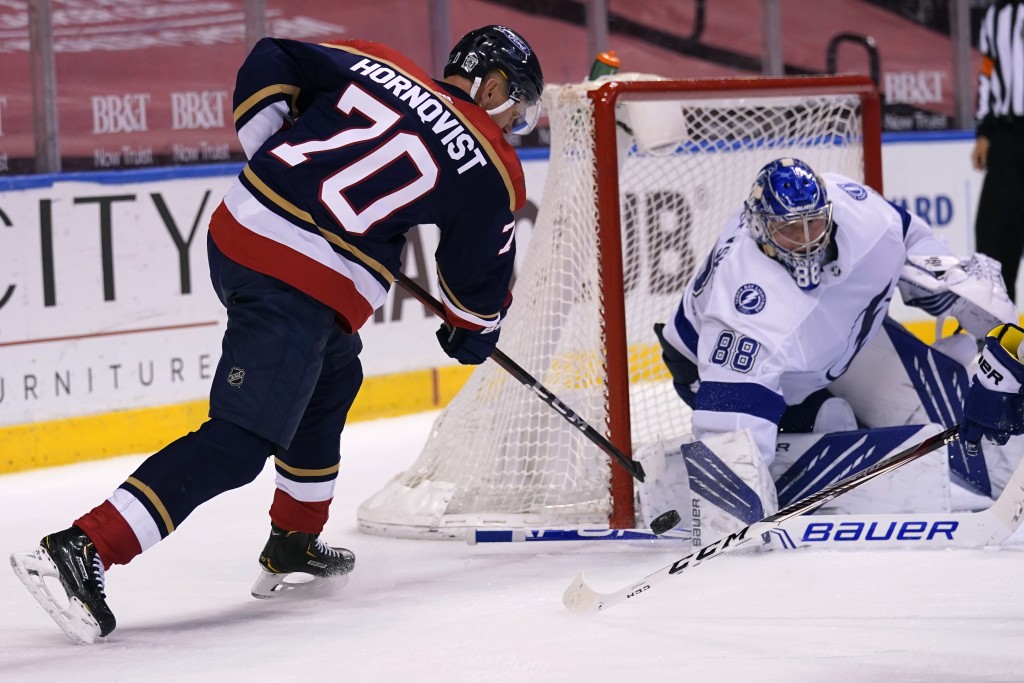 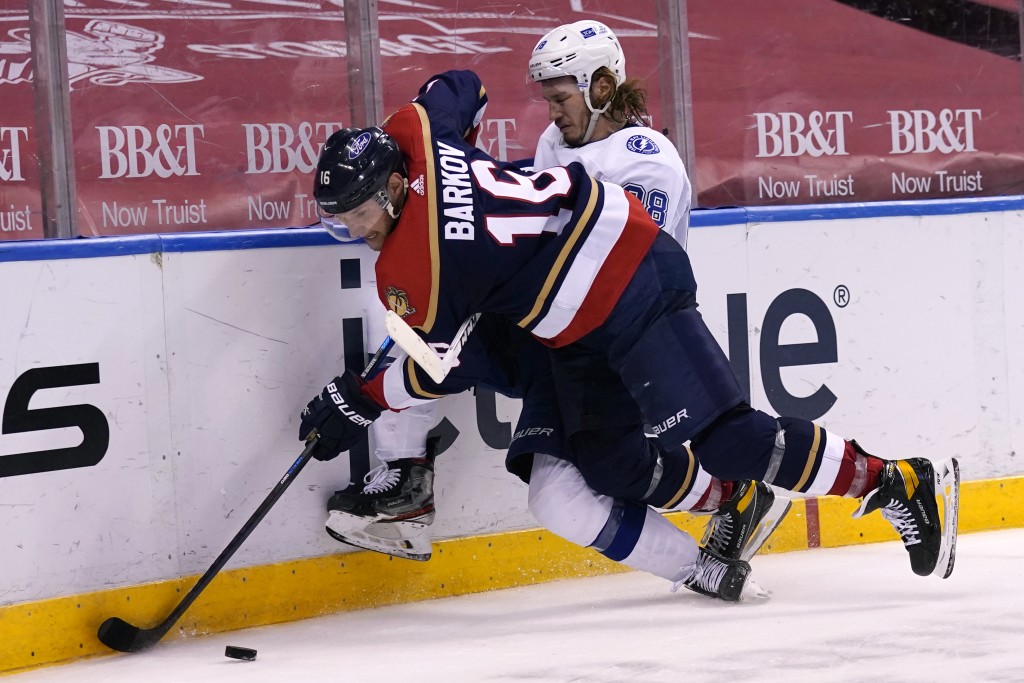 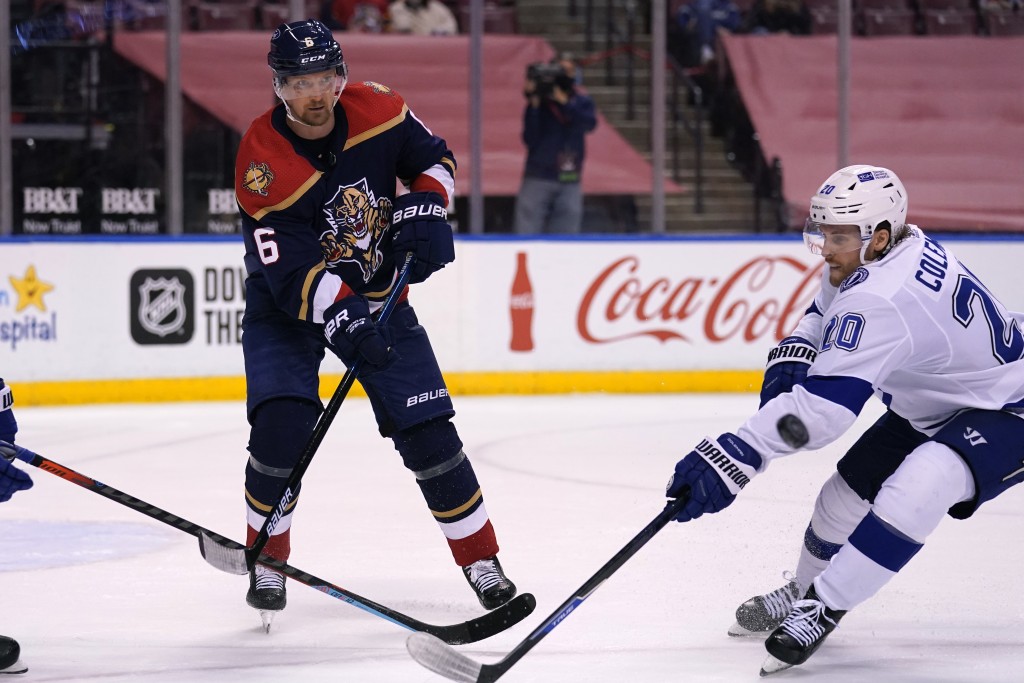 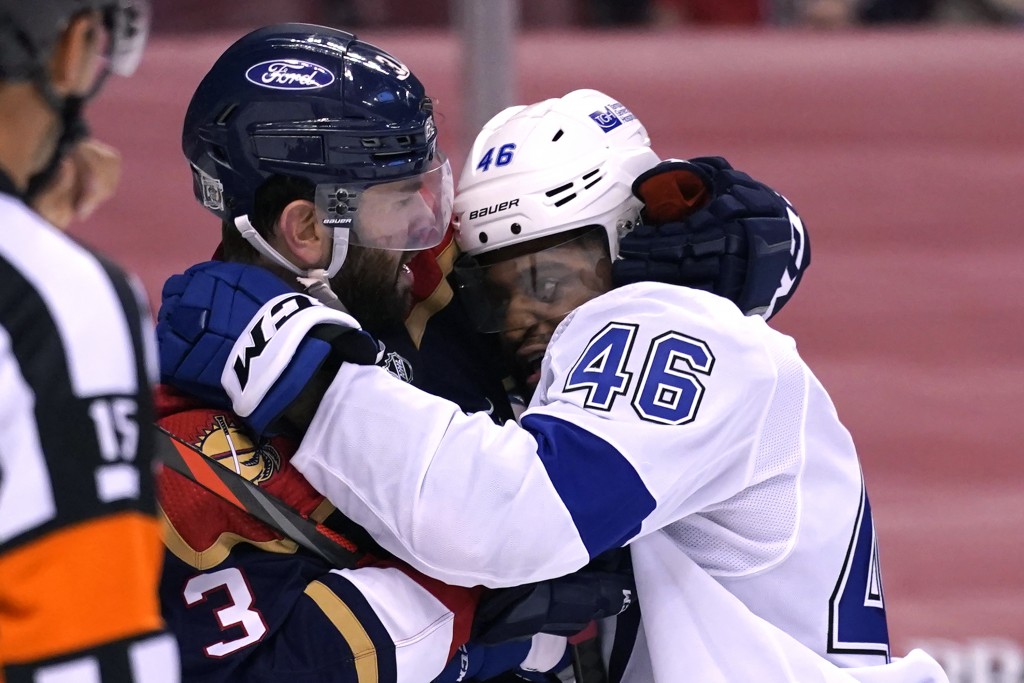 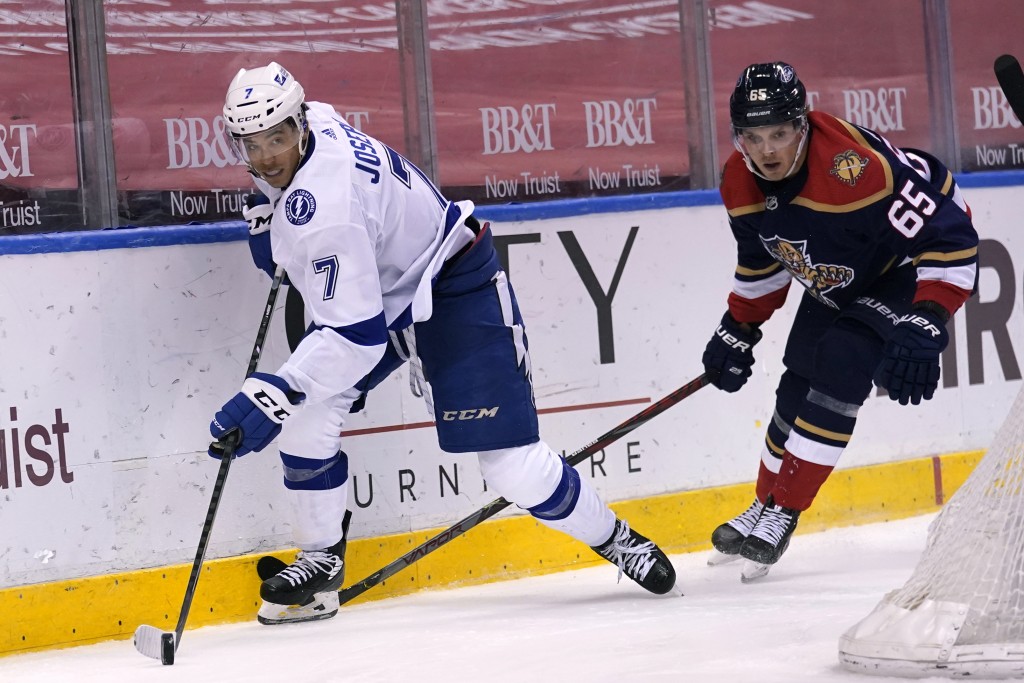 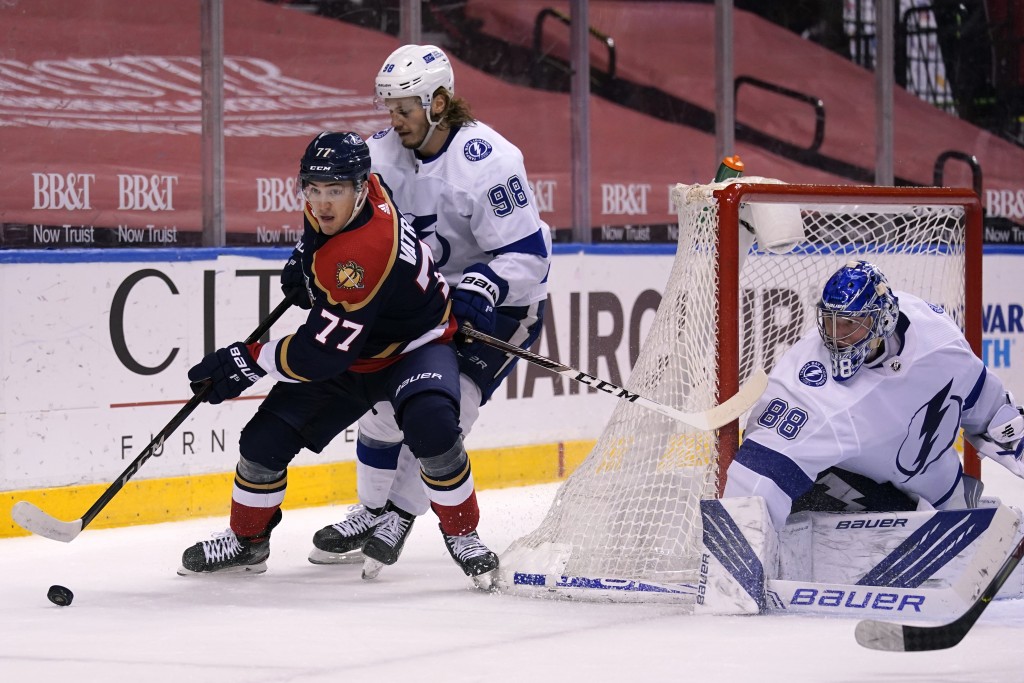 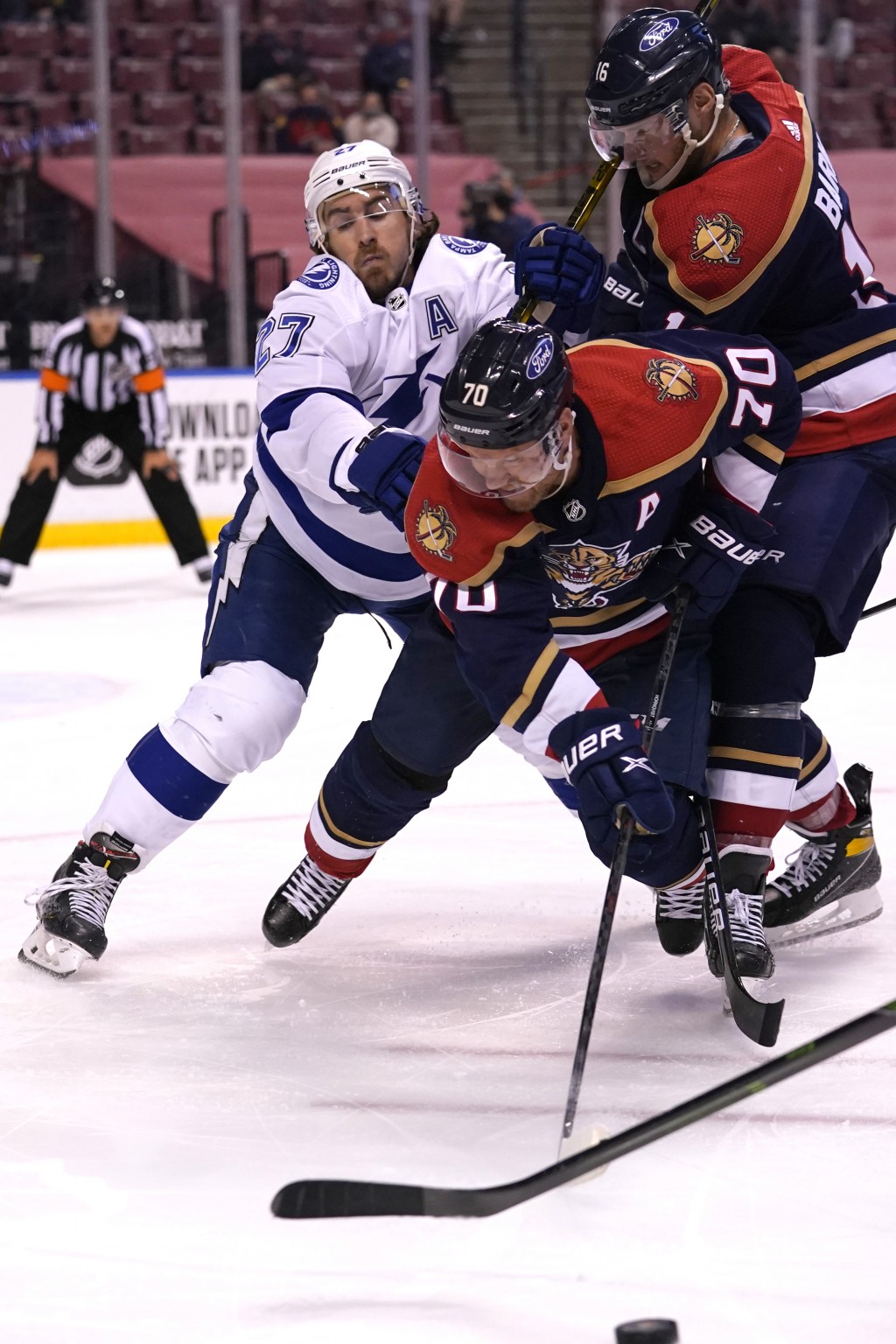 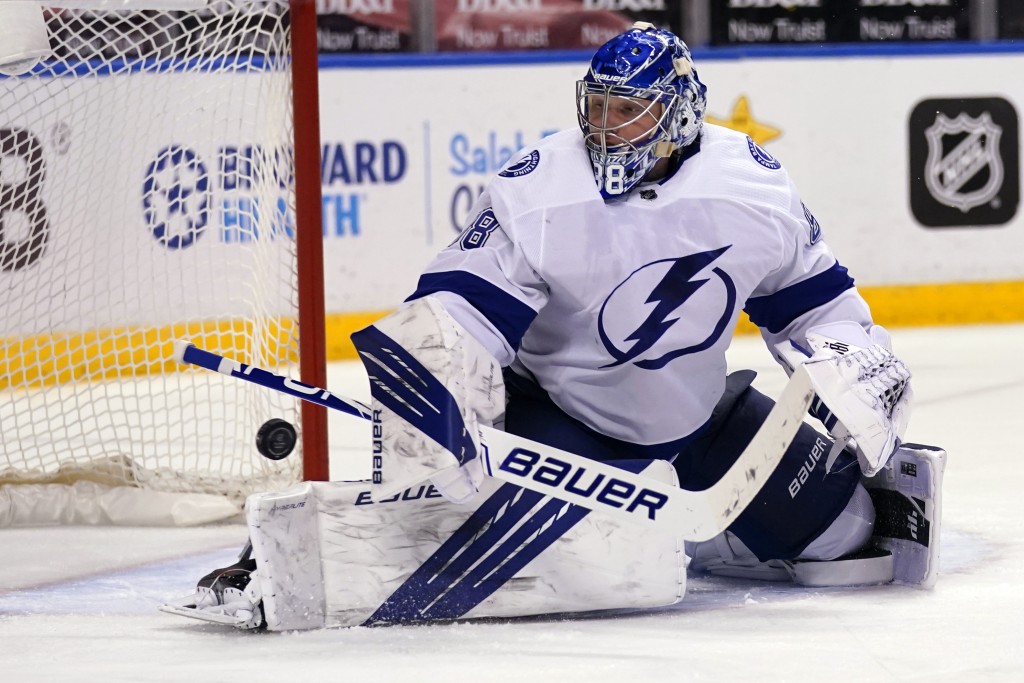 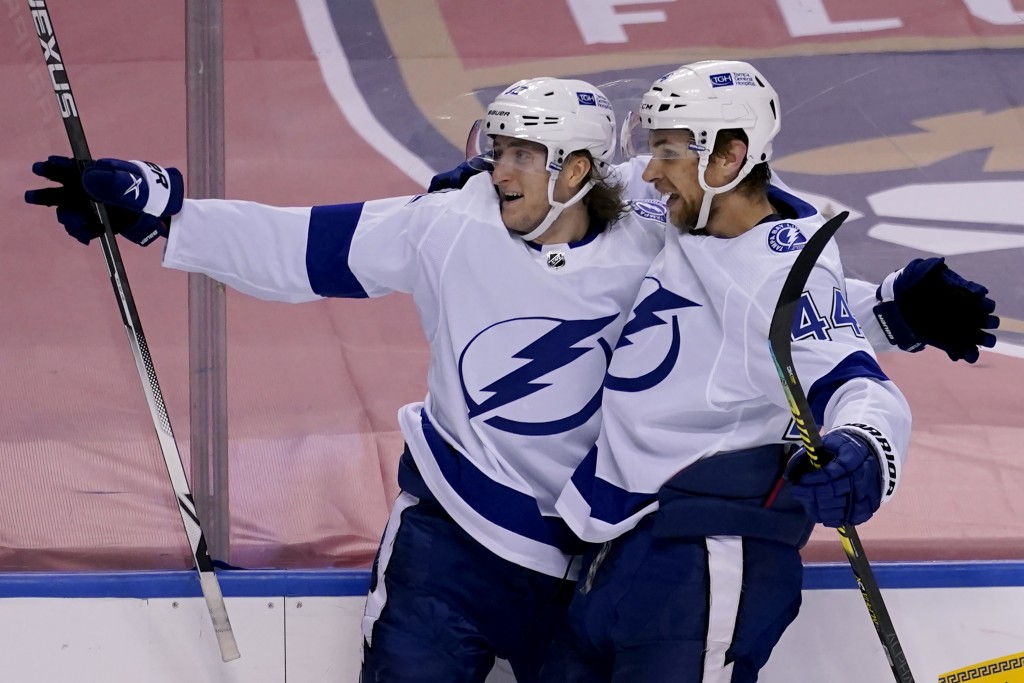 SUNRISE, Fla. (AP) — Tyler Johnson scored two of Tampa Bay's four goals in the second period and the Lightning avenged a loss to Florida earlier in the week with a 6-1 victory over the Panthers on Saturday night.

Ondrej Palat, Mathieu Joseph and Barclay Goodrow scored, Alexander Volkov added his first NHL goal and the Lightning strengthened their hold on first place in the Central Division with a 3-1-0 road trip.

The Lightning (10-2-1) killed off four Florida power plays on the way to the win.

The rematch featured another matchup between Tampa Bay’s Andrei Vasilevskiy and Florida’s Sergei Bobrovsky, who started two nights earlier in the Panthers’ 5-2 victory.

Vasilevskiy stopped 33 shots and ran his record to 9-2-1. A third-period goal by Frank Vatrano spoiled his shutout bid.

The Lightning owned the NHL’s top-ranked road power play entering the game and struck at 4:11 of the second on their second man advantage with Palat’s blast from the right circle in the second period.

The tempo picked up from there, with Tampa Bay withstanding a strong push by the Panthers and turning to its defense to push the lead to 2-0 after Joseph blocked a shot near the blue line and scored on a breakaway.

Gemel Smith’s steal along the boards resulted in Johnson’s first goal. Johnson backhanded in a rebound as the Lightning built a 4-0 lead.

In Thursday’s first meeting, the Panthers and Lightning played without first-line forwards Anthony Duclair and Steven Stamkos, respectively, who both wear No. 91 and were added to the NHL’s COVID-19 list.

However, Duclair, who has been held without a goal but has six assists, returned to the Panthers’ lineup Saturday. Stamkos was added to the list Friday and missed his second consecutive game.

Tampa Bay also played without second-line center Anthony Cirelli (upper body). The club announced he was week to week and would miss significant time after being injured in the third period on Thursday.

Before the anthem, the Panthers organization honored the 17 lives lost in the 2018 school shooting at nearby Stoneman Douglas High School in Parkland on Valentine’s Day.

In the darkened arena, fans displayed the lights on their phones as the 17 names scrolled on the big screen above center ice.

The Panthers sported their new reverse retro jerseys for the first time. They will be a regularl sight during Saturdays at home. The blue-themed ensemble features their original leaping panther logo and red trim.

The intra-state rivals meet for the third consecutive time on Monday night at Tampa’s Amalie Arena.