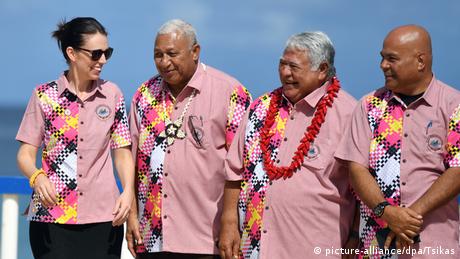 The Pacific Islands Forum – the region's most influential body that is long supported by Japan, the United States, Australia and New Zealand – is on the brink of collapsing after five of the 18 member states announced their withdrawal in a dispute over the leadership of the organization.

The resignations of the Federated States of Micronesia, Palau, the Marshall Islands, Nauru and Kiribati have triggered concern in allied countries as the breakup of the regional bloc could leave some states vulnerable to approaches from Beijing and deepen geopolitical and economic rivalries that are already emerging.

Washington, Tokyo, Wellington and Canberra point out that China has deep pockets and has already been busy providing loans and development assistance across the region in return for access to resources, markets or infrastructure facilities.

The crisis in the forum began in early February, when Henry Puna, the former prime minister of the Cook Islands, was appointed secretary general of the forum during a virtual meeting. The government of Palau objected on the grounds that Puna's appointment violated an agreement to rotate the leadership between representatives of the three major island groups – Polynesia, Melanesia and Micronesia.

Puna defeated Gerald Zackios of the Marshall Islands, with Palau announcing on February 4 that it was formally terminating its participation on the grounds that "unity, regionalism and the Pacific Way no longer guide the forum."

Five days later, and despite efforts by Australia to mediate in the dispute, the other island states announced their withdrawal, with the government of Micronesia releasing a statement expressing "great disappointment" in the appointment process.

Founded in 1971 to enhance cooperation between the territories and countries of the Pacific, including through a trading bloc, the forum is headquartered in Fiji. The bloc spans more than 8.5 million square kilometers of the region and 11 time zones, and is home to nearly 39 million people.

The geographic and cultural differences that divide the member states have caused friction in the past, says Stephen Nagy, an associate professor of international relations at Tokyo's International Christian University, although growing competition for power in the Pacific makes this new threat to the coherence of the region more serious.

"Japan has historic ties to the region and the US is obviously keeping a close eye on the situation, but Australia and New Zealand have long seen this region as their sphere of influence and have built up longstanding relationships through the use of development aid and education," he told DW.

"Unfortunately, that model cannot compete with the sort of money that China is apparently happy to spend," he said. "Virtually, all of these island nations have very one-dimensional economies that are heavily reliant on the tourism industry, and that has been devastated by the coronavirus pandemic," he added.

"These nations suddenly have very little in the way of income and are suffering very serious economic problems," Nagy said. "And when China offers to step in with large amounts of money, that model is a very attractive proposition."

Nagy says Washington and other governments with a stake in the region need to come up with additional funds and the promise of long-term support so that the island republics' governments do not look elsewhere in search of a quick fix to their immediate problems.

Japan has traditionally been one of the strongest supporters of the forum and has hosted the Pacific Islands' Leaders Meeting (PALM) every three years since 1997, points out Jun Okumura, an analyst at the Meiji Institute for Global Affairs.

"Many of these islands were part of the Japanese empire in the early decades of the last century and, in the years after the war, Japan worked very hard to rebuild close working relationships with their governments," he told DW. "A lot of Japanese development aid has been invested in projects throughout the Pacific. I understand that the citizens of these islands today have a good impression and image of Japan."

In return for its aid, Tokyo has been able to negotiate fishing and other trade deals, but Japan still has a sense of responsibility for these relatively young and developing nation states, he added.

"Tokyo will be watching developments in the forum very closely and I am sure it will be acting behind the scenes to try to encourage some sort of rapprochement between the different sides in this dispute because, quite simply, the resilience of the forum is also important to Japan," Okumura said.

Will the US intervene?

Yet the signs are not encouraging.

The forum has announced that it is standing by its appointment of Puna, with a statement declaring, "We have upheld our principles and values as characterized through the Pacific Way."

"Central to our Pacific Way are our values of the collective good, maintaining relationships, 'talanoa' [the Samoan word for speaking] and mutual respect," it added.

Nagy said he expects the US and Japan to quickly step forward with concrete proposals on how the rift might be repaired.

"There needs to be a compromise to move forward, but there also needs to be the offer of additional aid and engagement," he said. "That's the price that must be paid if this regional alliance is not to go the way of some others, such as the Association of South-East Asian Nations, where a country like Cambodia is now effectively a client state of China."