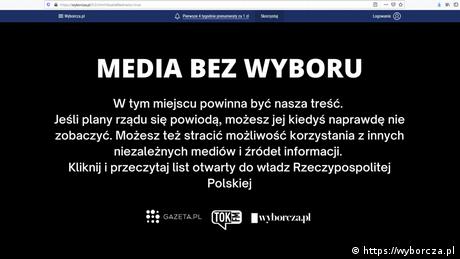 Members of the media say the tax is an attempt to undermine press freedoms.

About 45 outlets joined the protest, including the country's leading newspaper, Gazeta Wyborcza, and the German-owned Polish tabloid Fakt.

The blackout is set to last for 24 hours. During this time, many outlets are displaying a black background and a protest banner.

A number of privately-owned radio stations have suspended broadcasts.

Major daily newspapers were published with a protest note on their front pages.

What is the new tax?

The new tax will impose a levy on advertising revenues of television and radio broadcasters, print outlets and internet media companies.

Cinemas and operators of outdoor advertisement displays will also be hit.

State media is exempt from the tax.

It is expected to take effect later this year.

What is the government's position?

The Polish government, led by the right-wing Law and Justice Party (PiS), said the tax is needed to boost revenues of the National Health Fund (NFZ) during the coronavirus pandemic — around 50% of the taxes raised will go towards this.

What do independent media outlets think of the tax?

The new levy would weaken and perhaps force the closure of some media outlets operating in Poland, limiting choice for their audiences, around 40 broadcasters wrote in an open letter to Polish authorities and leaders of political parties.

It could also prevent quality reporting on local level and further disadvantage private media, the outlets' representatives said in the letter.

Poland's main private channel TVN, owned by the US group Discovery, told the AFP news agency that the government proposal had "the intention of restricting their pluralism and freedom of expression."

On its webpage it warned that, if advertising tax is passed, it could eventually cut off readers from their access to independent news.

Radio Zet told its listeners that the tax would mean "liquidation for some media businesses."

Poland's government has already overseen a number of changes that have restricted independent media outlets.

Some outlets taking part in Wednesday's blackout are set to be taken over by a state-controlled fuel firm Orlen.