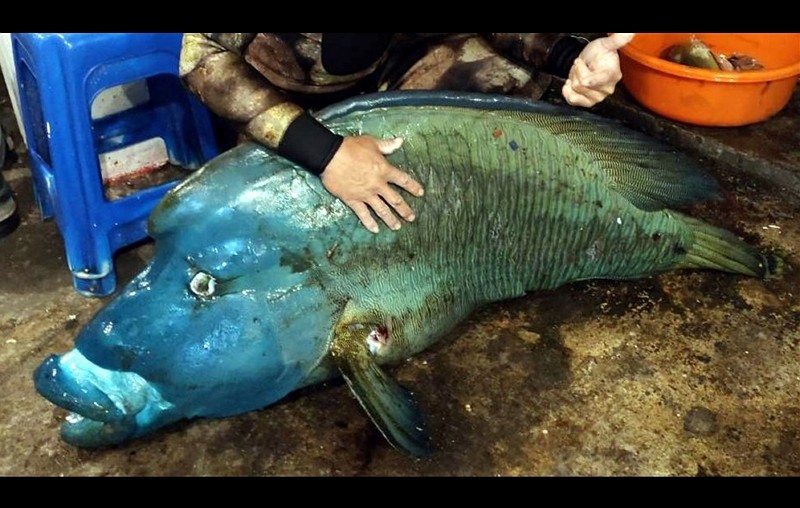 A man caught the attention of the authorities after sharing in a Line group a picture of himself with a humphead wrasse, which measured over one meter and sported a vibrant turquoise color. The man's boastful conduct led to his being reported to the Coast Guard for the illegal fishing of a protected aquatic species, reported CNA.

According to the Coast Guard, two male residents were involved in the incident, surnamed Li (李) and Hsieh (謝), who claimed the fish was already dead when they reeled it ashore. It was later brought back for a photo session before being released into the sea, they said.

The testimony appeared to be fishy, and the suspects are being investigated for allegedly breaching the country’s animal protection regulations. The reckless behavior has also sparked an uproar from the online community on the outlying island, with some criticizing the young men for catching an endangered species that grows at a pace of just one kilogram a year.

They now face a criminal sentence of between six months and five years, along with a fine of between NT$300,000 (US$10,716) and NT$1.5 million, for disturbing, abusing, hunting, killing, or utilizing wildlife for illicit purposes, per the Wildlife Conservation Act.

According to Ho Yuan-hsing (何源興), director of the Mariculture Research Center at the Eastern Marine Biology Research Center, it is rare to see such a large humphead wrasse, or Napoleon wrasse — estimated to weigh over 30 kilograms — in Taiwan’s waters. The country included the species on the protection list in 2014.