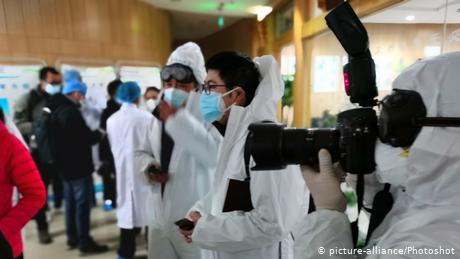 When the novel coronavirus began to ravage the central Chinese city of Wuhan just over a year ago, many young Chinese in east-coast cities ignored the state media reports, which they saw as untrustworthy.

Instead, they turned to social media. Around a dozen citizen journalists and bloggers in the capital of Hubei province used smartphone videos to document the chaotic early stages of the pandemic.

Without them, numerous details which the authorities preferred to keep under wraps would probably not have been made public.

But now, even this small pocket of freedom of expression is being further restricted by China.

As part of an annual review process starting this year, all of a journalist's social media posts will be evaluated to determine if they're politically acceptable — regardless of whether they are professional or personal statements.

The evaluation will be used to determine whether or not to renew press accreditation.

The January 19 announcement from the "General Administration of Press and Publication" justifies the decision in typically ornate Communist Party language, saying its purpose is "to thoroughly implement General Secretary Xi Jinping's important ideas on propaganda and ideological work, and build a team of journalists who are politically strong, realistic and innovative."

The seemingly small change will likely have lasting consequences.

Chinese media companies are always seeking to carve out certain freedoms within the country's authoritarian environment. That includes using social media to report on topics that aren't approved by the party censorship authorities who hold sway in newsrooms.

One Wuhan-based author, Fang Fang, used micro-blogging site Weibo to publish her diaries about the outbreak, which have been read millions of times in China, despite traditional media barely covering her critical writing. In the future, such citizen journalists will also require official accreditation.

And there is still no trace of Fang Bin, whose secret recordings of bodies piled in front of a hospital in Wuhan were broadcast by television stations around the world.

Even so, it's not correct to say that critical journalism is no longer possible in China. For some time after the start of Wuhan's COVID-19 outbreak, the respected Chinese publication "Caixin" in particular published in-depth reports.

People within the domestic media industry say that for a few weeks, censors allowed more freedom than usual.

This was partly in response to the public's solidarity with doctor and whistle-blower Li Wenliang. Li was initially sidelined because of his warnings about the virus, only to be vindicated after his tragic death from COVID-19.

But this does not change the fact that overall censorship has tightened significantly since Xi Jinping took office.

Criticism of fundamental things like the Communist Party's claim to legitimacy is met with a rigorous and severe response from the state security apparatus.

Another new development is the increasing crackdown on Chinese users of foreign platforms like Twitter and Facebook, which are officially banned and can only be accessed using VPN software.

In the past three years, more than 50 Chinese citizens have been sentenced for using such platforms to express their views on issues like the protest movement in Hong Kong, the status of Taiwan and human rights violations in Xinjiang.

Social media as an outlet

But even less controversial opinions can cost dearly if voiced on banned platforms.

Zhou Shaoqing from the coastal city of Tianjin spent about nine months in prison merely for telling his 300 Twitter followers in February that hospitals and health officials were "for whatever reason" downplaying the number of confirmed coronavirus cases.

On the other hand, there are also cases where social media can bring about (limited) victories against government abuses of power.

When a woman in China's southern Guizhou province was detained for several days in November for calling the local neighborhood committee's party cadre a "bumbling idiot" in a "Wechat" group, there was an outcry.

As a result, her pretrial detention was declared unlawful and the police officers responsible were suspended.