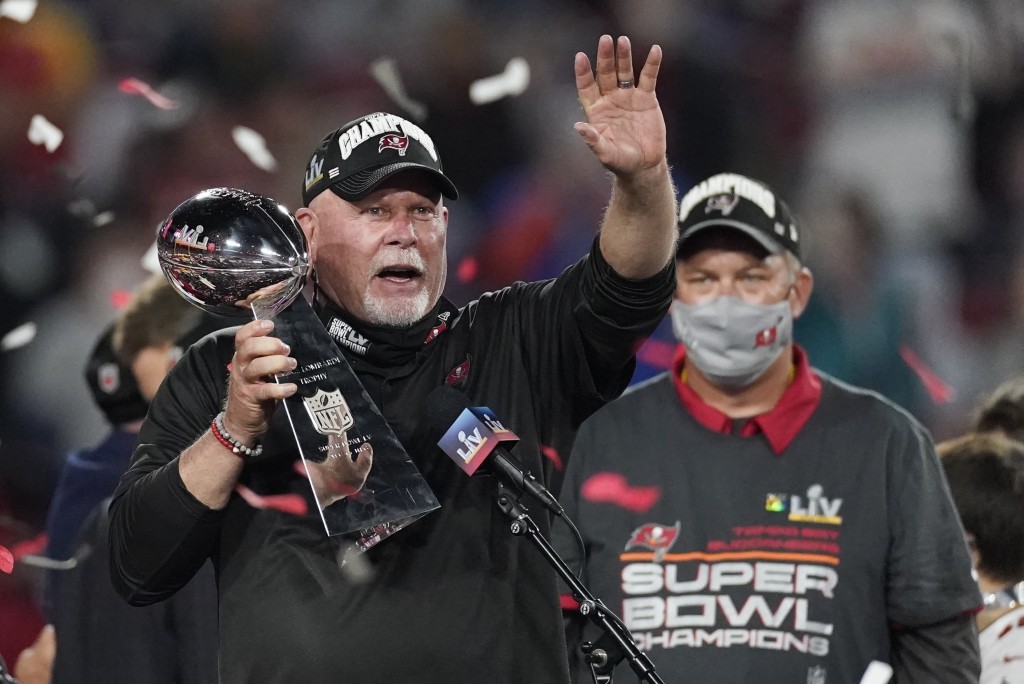 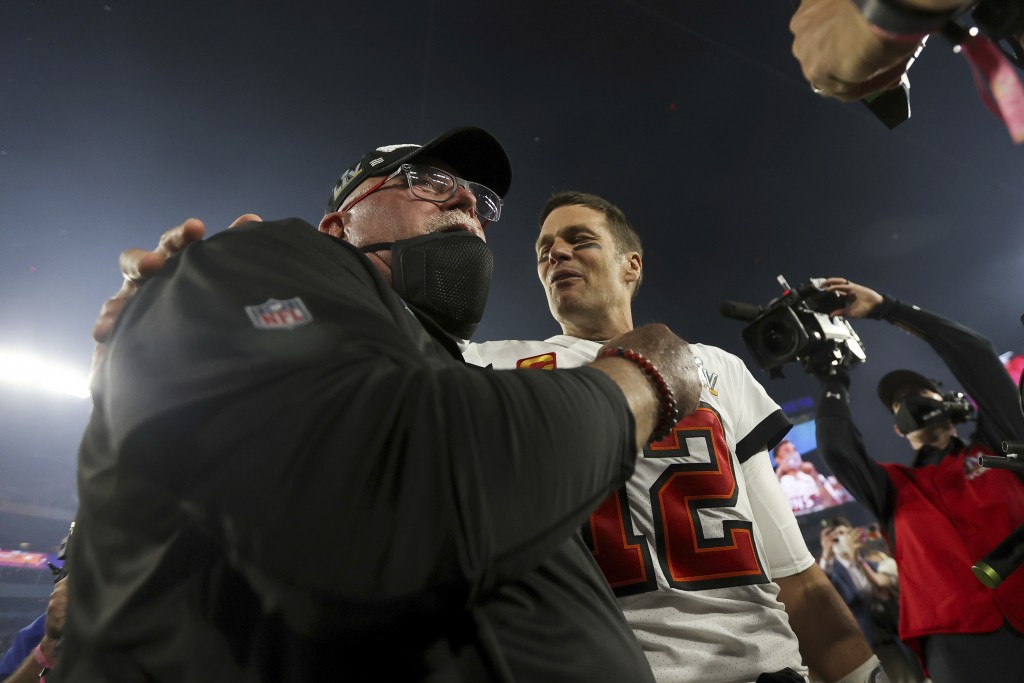 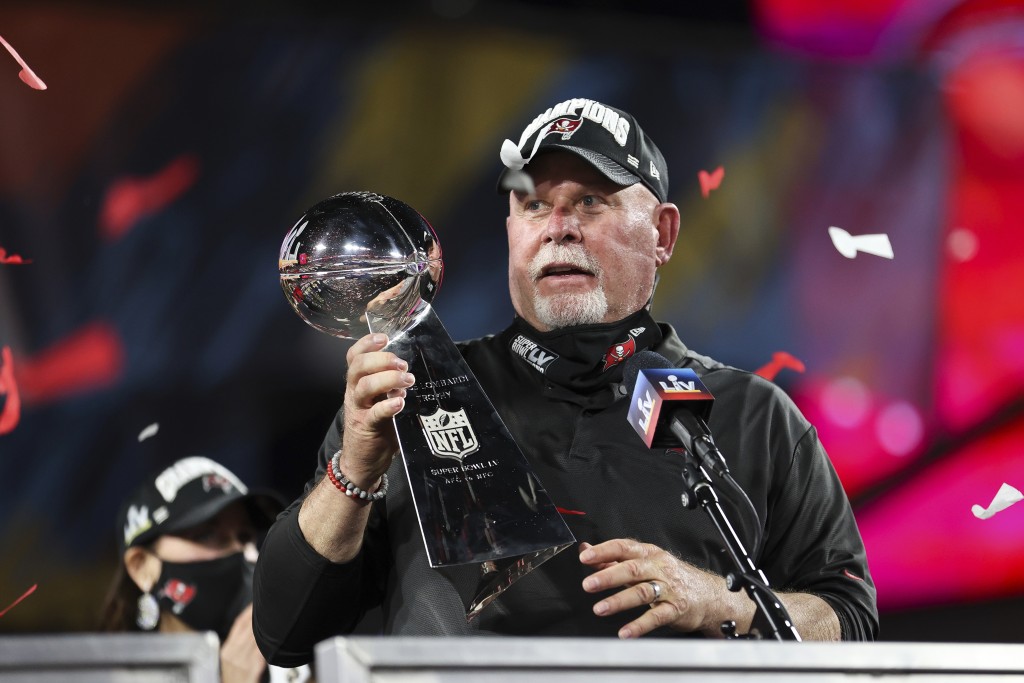 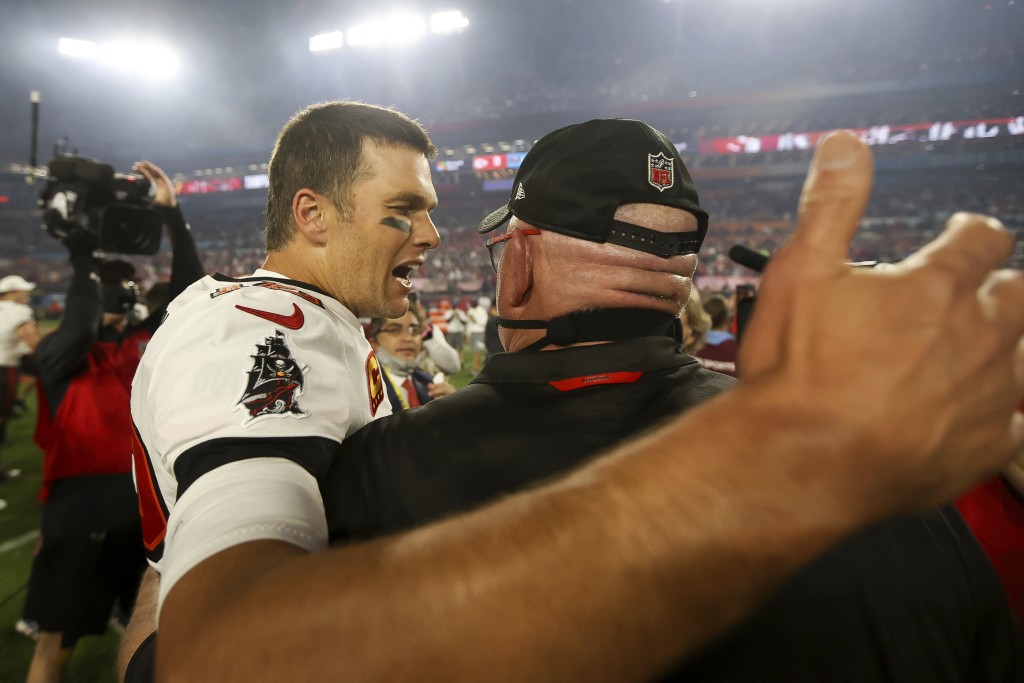 Arians unplugged his headset, slipped on a Super Bowl championship hat and braced for the traditional Gatorade shower. He didn’t even try to avoid it.

After defensive lineman Vita Vea and William Gholston emptied the bucket on his head and shoulders, Arians raised both arms and turned to the stands to — quite literally — soak it all in.

It wasn’t Arians saying goodbye, either.

The 68-year-old Arians made history by becoming the oldest head coach in NFL history to win a Super Bowl. He bumped New England’s Bill Belichick from the top spot. Belichick was 66 when the Patriots — also with Tom Brady at quarterback — beat the Los Angeles Rams two years ago.

Arians can add that to an impressive resume that now includes three Super Bowl rings — he won two as an assistant with Pittsburgh — and more proof that he’s one of the best offensive minds in league lore.

The man nicknamed the “Quarterback Whisperer” for his work with Peyton Manning, Ben Roethlisberger, Andrew Luck and Carson Palmer came out of retirement to coach the Buccaneers, made a bold decision to move on from talented but turnover-prone Jameis Winston a year ago and then lured the most decorated quarterback in NFL history to Tampa.

Together, Arians and the 43-year-old Brady helped Tampa Bay win its first championship in 18 years and cemented their spot in the franchise history books.

Brady was one of the first to get to Arians after White picked off Patrick Mahomes with 1:33 remaining. They had a lengthy embrace before Brady strapped on his helmet and jogged onto the field to take three knees and set off an even bigger celebration.

Red, white and black confetti blasted into the air and eventually covered the field. The cannons from the Bucs pirate ship blasted and then fireworks lit up the sky over Raymond James Stadium.

Arians made his way to midfield to exchange a handshake and words with Kansas City coach Andy Reid. Arians then rejoined the party and eventually made his way to the stage to accept the Lombardi Trophy.

It was just four years ago that Arians stepped down in Arizona for health reasons. He took a year off and worked in television before returning to the NFL with Tampa Bay — joining a young team he saw as full of potential. Did he ever envision this happening?

“No, not really,” he said. “I think I would have been smoking something illegal to really imagine this.”

He surrounded himself with an sterling staff, one more diverse than any in league history. He had three Black coordinators and a female assistant coach. Defensive coordinator Todd Bowles could have been named MVP. Offensive coordinator Byron Leftwich called a nearly flawless game outside a failed fourth-down call at the goal line.

“I just try to get out of the way and not screw it up,” Arians said.

His biggest coup was landing Brady, who engineered yet another masterpiece and won his seventh Super Bowl after six titles with the Patriots.

Brady and the Bucs were 7-5 following a Week 12 loss to the Chiefs. But didn’t lose again, winning their final eight games. The last three were rematches: they beat NFC South champion New Orleans and No. 1 seed Green Bay on the road before becoming the first time in NFL history to earn the chance to play a Super Bowl in their home stadium.

Brady did what he does best. And the defense came up big, a much better performance that what it put on the field in the first game against the Chiefs. The unit harassed Mahomes early and often, intercepting two passes and sacking him twice.

“They chased him around all night,” Arians said. “Patrick wasn’t going to beat us running. Let him run around all day.”

The Bucs ended up doing all the running after the game: around the field, through confetti and getting in line to hug Arians.