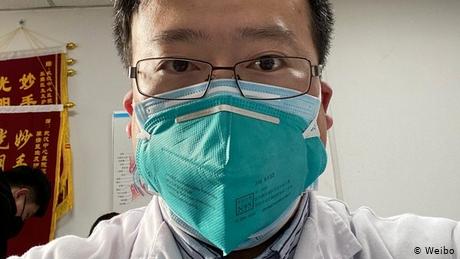 Thousands of Chinese mourners took to social media on Saturday to pay tribute to Li Wenliang, the doctor who first broke the news of a new mysterious virus in Wuhan, one year after he died from COVID-19.

Li came to fame after blowing the whistle on the new SARS-like virus which had been discovered among patients in Wuhan in December 2019.

Chinese police initially reprimanded him for spreading "rumors." The 34-year-old doctor later died after catching coronavirus from a patient.

Li's death led to an outpouring of grief and anger towards the government for its mismanagement of the crisis.

Li's page on the Weibo social media network received thousands of comments on Saturday with people expressing grief as well as giving updates about their own lives, AFP reported.

"Dr. Li, the weather is great today where I live ... everyone around me is trying their best in life, all is good, happy Lunar New Year," one Weibo user wrote.

"I thought everyone would have forgotten you after a year," wrote another commenter. "I was wrong, you live forever in the hearts of the Chinese people."

"He was the first to tell us about the virus," Li Pan, a Wuhan local who owns an online store, told Reuters.

"He must have considered the impact would be huge, but he still raised the alarm. That was really brave," he said.

The government has yet to recognize Li's contribution In September, President Xi Jinping presented a list of "heroes" who had played important roles in the "people's war" against the coronavirus, but his name was not included.

The anniversary of the doctor's death coincided with the visit by the World Health Organization to Wuhan to carry out research into the initial outbreak of the virus.

The investigative team has already visited the Huanan Seafood Wholesale Market where many of the first people who caught the virus worked.

China was initially hesitant to allow the WHO to enter the city, fuelling conspiracy theories about the origin of the virus.

Some Chinese authorities and state media have also promoted their own theories that COVID-19 originated in another country before entering China.