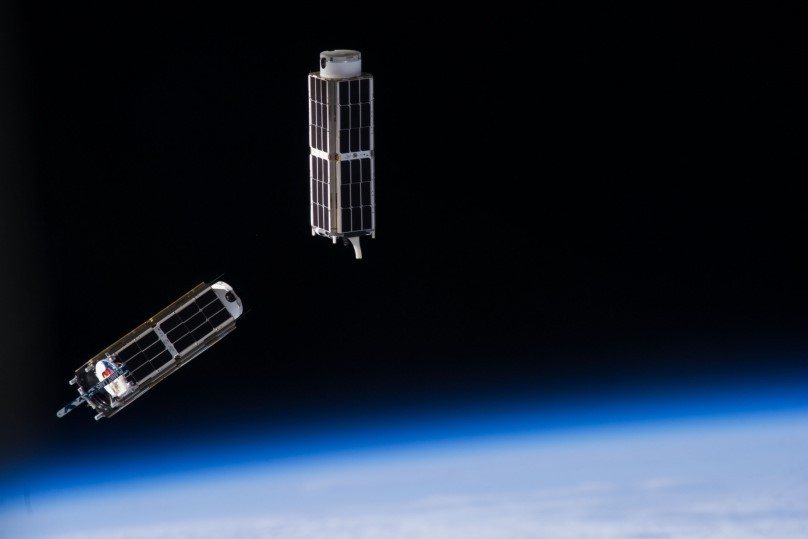 The commercialization of space has long been dominated by the world's superpowers, but Taiwan is hoping to carve out its own blue ocean in the space economy through its development of "cube" satellites.

"CubeSats" are miniaturized satellites made up of multiple cubic modules measuring 10 cubic centimeters and weighing 1.3 kilograms that can have a wide range of applications and are increasingly relevant to the aerospace industry. In the short term, Taiwan sees CubeSats as testing grounds for suppliers eager to crack the aerospace market, but the longer-term vision is to emerge as a full-service provider and use the know-how from CubeSats to develop communication satellites for 5G networks.

"CubeSats provide unique opportunities for Taiwan as they allow entities with less experience to hone their skills and test the feasibility of space technologies at an early stage," said Lin Chun-liang (林俊良), the recently retired director-general of the National Space Organization (NSPO), which started the CubeSat project in 2017. The stakes could not be higher. The space economy was worth US$385 billion in 2020, according to Euroconsult's Space Economy Report 2020, including US$293 billion in satellite services and US$4 billion in manufacturing—areas of particular interest to Taiwan.

A major milestone in Taiwan's CubeSat journey came late last month when the first two CubeSats fully made in Taiwan were launched into space on a SpaceX rocket on Jan. 24. One of them was the "IDEASSat (Flying Squirrel)," developed by National Central University (NCU), which will be used to research how plasma in the earth's ionosphere, or upper atmosphere, affects radio waves, which are used for communication in 5G networks. The other was the "YUSAT (Yushan, or jade mountain)," made by New Taipei-based MoGaMe Mobile Entertainment, and will primarily be used to monitor marine traffic.

Flying Squirrel weighed only 4.5 kg and cost NT$40 million, said Chao Chi-kuang (趙吉光), director of the NCU's Graduate Institute of Space Science and Engineering and an advisor to the government on CubeSats.

In contrast, Taiwan's FormoSat-5 satellite, which was launched in 2017, weighed 450 kilograms and cost NT$5.6 billion (US$200.1 million) to produce, a difference that highlights the value of CubeSats. "Any miniaturization is crucial in commercial applications as it will substantially lower costs and entry thresholds for interested parties, including universities and individuals," he said. "Proof of concept (POC)" opportunities, however, may be the biggest commercial niche offered by CubeSat development, according to Chao.

POC involves testing an idea or method to see if it is feasible, a critical step in the research and development of space devices on which billions of Taiwan dollars may be risked. CubeSats use components off the shelf (COTS) that are designed for day-to-day devices such as laptops and smartphones rather than space, and give local electronics companies the chance to see how their products stack up, Chao said.

"To build a sustainable aerospace industry in Taiwan, companies must prove that their electronic components or systems work in space -- and we will have to prove it ourselves instead of relying on other countries to do it for us," Chao said. Once components are certified, they can be exported, he said.

Taiwan is also eyeing the development of its own communications satellites, hoping to benefit from the hands-on experience of making CubeSats. Lin said the government will prioritize the development of low earth orbit satellite constellations in the future to support 5G and Beyond 5G networks and try to export the technology to meet the growing bandwidth requirements of new technologies.

To achieve these goals, the government kicked off a four-year, NT$4 billion project with the aim of launching its first communications satellite in 2025, Lin said.
There is a difference of opinion whether the 5G communications mission could only be achieved with a bigger satellite weighing 400 kg or a group of CubeSats, but there is little disagreement on Taiwan's potential as a player in the aerospace business.

Frenchman Julien Hennequin, chief operating officer of Odysseus Space, said he and two French friends "came to Taiwan because we could see an opportunity in Taiwan to reach an Asian and then global market." Odysseus, which offers consulting and engineering support services and launch arrangements, partnered with Mogame on arranging the launch of Yushan CubeSat, which weighed about 2 kg and cost NT$4.4 million to produce.

He was attracted in part by Taiwan being a major producer of COTS components and technologies and offering first-hand access to those elements.
"There is a will to move from a scientific- and public-only use of space, supervised by the National Space Organization (NSPO), to a use of space where private companies could be involved, develop their own business applications and make profit," the Frenchman said. Hennequin cautioned, however, that Taiwan needs to accelerate its efforts because similar campaigns are already well underway in other countries.

According to Nanosats Database, the world's largest database of satellites ranging from 1-10 kilograms, there were 1,474 such satellites launched as of Jan. 1, with an overwhelming majority of them CubeSats. There are already 70 countries and 483 companies holding nanosats, and over 2,500 more are set to be launched in the following six years, the database showed.

The perils of innovation

Despite confidence in Taiwan's future in the space economy, the launches of the two CubeSats show why progress is not easy. It took until Feb. 1 for the signal from Flying Squirrel to be received, and the Yushan had yet to make contact as of Feb. 5, leading to questions over whether the investment in space technology was even worthwhile.

"Don't get disappointed because you can't get the signal on Day 1," said Science and Technology Minister Wu Tsung-tsong (吳政忠). "Nothing can be 100 percent certain when it comes to innovation." "It is the spirit that matters more than getting the signal," he said.