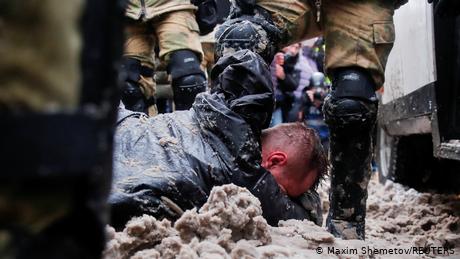 "Number 15! Who is number 15?" yells a woman standing in line. Her breath steaming in the cold air. It is 10 below zero (14 degrees Fahrenheit), but if you are standing in line for hours on end it feels like at least 20 below. Dozens of people have been waiting here at the entrance to the Sakharovo correctional facility since 6:00 a.m. (0300 UTC), hoping to help friends and family stuck behind the razor wire-topped walls since being arrested over the past several days in the capital Moscow.

Memories of the Stalin era?

Svetlana Wasser is one of those inside. The Moscow resident was arrested on January 31, while protesting for the release of jailed Russian opposition figure Alexei Navalny. Her roommate Hermann, who prefers not to give his last name, is here with food, hygiene products and a warm blanket — all packed into two plastic bags. "It's like the Stalin era," says the agitated 29-year-old. He tells me his roommate was sentenced to five days in prison just because she was standing near the jail where Navalny was being held in pre-trial detention. "We have no idea if Svetlana and the others have anything to wrap themselves up in," Hermann tells DW. "What's going on reminds me of the days of the 'Red Terror.' It's terrible."

Hermann complains that prison guards are only accepting one bag every 45 minutes — slowly inspecting each one thoroughly — and relatives standing in line say those inside desperately need blankets and warm clothes. Images of the inhumane conditions that the mostly young protesters are suffering have been circulating online: They show overcrowded cells with no mattresses or blankets and one open toilet in the middle of a cold metal floor. There are no masks to protect against the spread of the coronavirus and social distancing is utterly impossible —snapshots of life in a Russian prison spread via social media networks.

Some inside have already been sentenced, others are still awaiting trial. They all have one thing in common — they dared to stand up to the Russian government. Well, almost all of them. Others just happened to be passing by the protests when they were picked up — wrong place, wrong time. Now, they too, are sitting in overcrowded prison cells in this southwest Moscow suburb.

According to media reports, more than 7,000 people have been arrested across Russia over the past two weeks. Police were especially brutal during the most recent protests in Moscow and St. Petersburg, at times security forces dragged people into police buses for no apparent reason. Authorities argue that the protests were not permitted and therefore posed a security threat. In reality, some police officers posed a security threat — to innocent bystanders.

"Please help me find my son," wrote Lyusine Khachatryan in a messaging app for families and friends of the arrested. "His name isn't on any of the prisoner lists," she writes. Her 25-year-old son Grant was arrested in downtown Moscow on February 2. He met a friend at a bar before he was picked up. His mother had called to warn him that the city was full of riot police and that the subways had been shuttered. A short time later he wrote his mother that he had been arrested and taken to a police station on the east side of the city. He was given a quick trial and sentenced to 10 days in prison.

"My son was taken to Sakharovo in a police bus. At first we were in touch, but then he stopped writing," Lyusine Khachatryan told DW via telephone. The last thing her son posted to Instagram was a picture of an overcrowded police bus. He complained that the air was so thick one could hardly breathe. Lyusine Khachatryan cannot travel to Sakharovo because she doesn't have a car and she has to accompany her small daughter to school. "My son was shocked. He had never been arrested before. He studied in the US but came back to Russia because he loves his homeland. Now he is thinking about leaving Russia for good," says Khachatryan as she cries into the phone.

Currently, one online video in particular is attracting attention: It shows young Russians huddled together in a dark police bus. One young man says he spent almost 12 hours in a court building after his arrest, sleeping on the floor while he awaited sentencing. Another complains about the stuffy air in the cramped quarters of the bus, where he has been stuck for over seven hours because there is no more space in the prison.

Support from those who don't even back Navalny

A young woman named Amaya is also standing in line outside the Sakharovo correctional facility. The 25-year-old from the nearby suburb of Podolsk says she has no friends or relatives inside and has nothing to do with the Navalny protests. "At first I just wanted to help the people forced to stand here all day in the freezing cold because their packages weren't accepted. I offered to let them sleep at my place," she tells DW. "They were stuck in the cold and needed a place to sleep so that they could be among the first in line the next morning. Then other people from Moscow started mailing me packages and asked if I could deliver them because they couldn't come."

Now, Amaya is freezing alongside the others. She has been here for 12 hours: "Of course, what is happening scares me. It's all so surreal. We have no idea where this will all lead. But I'm not here for Navalny or any other political leader. I'm standing here for a better life, one that is free — and for a good future for Russia."

Night is beginning to fall on the Sakharovo correctional facility. The line has barely moved. Hermann's bags rest in the snow bank next to him. He has not been able to deliver warm clothes for his roommate Svetlana. Dejected, he prepares to leave. Like everyone else here, he plans to return in the morning.

This article has been translated from German by Jon Shelton