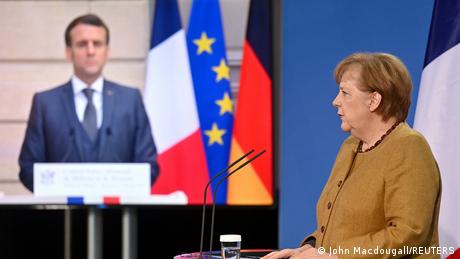 "Trans-Atlantic and international questions," were also on the agenda, a French presidency official said.

The two leaders held the meeting as part of the German-French defense and security council that was founded in 2017.

The conference took place as the newly elected US President Joe Biden made moves to re-kindle close trans-Atlantic ties, including in defense.

Biden announced plans on Thursday to halt the former Trump administration's withdrawal of thousands of US troops from Germany —a move welcomed by the German government.

Can the EU and NATO work together?

NATO and EU security "are not opposed to one another" Merkel emphasized in Friday's press conference.

Meanwhile, Germany has traditionally been happy to rely on the US and the NATO military alliancefor security.

They talked about the development of the Eurodrone — a long-distance, unmanned aircraft that is being developed with partners from Spain and Italy.

Germany and France, together with Spain, are also developing a new fighter jet, known as the Future Air Combat System (FCAS). The jet is being designed in France.

"FCAS will not be completed in the next few weeks. It's a complex issue," Macron said. Merkel said that while the project is under French leadership, it must be a project that shows both countries "on an equal footing."

Merkel on Friday said further meetings would examine which companies would be awarded contracts to work on the project.

German and French companies are working on developing the so-called European Main Battle Tank. The project is being led by Germany. Merkel said further meetings would be held on the tank towards the end of February.

The two leaders also said they discussed the modernization of the French-German "Tiger" combat helicopter.