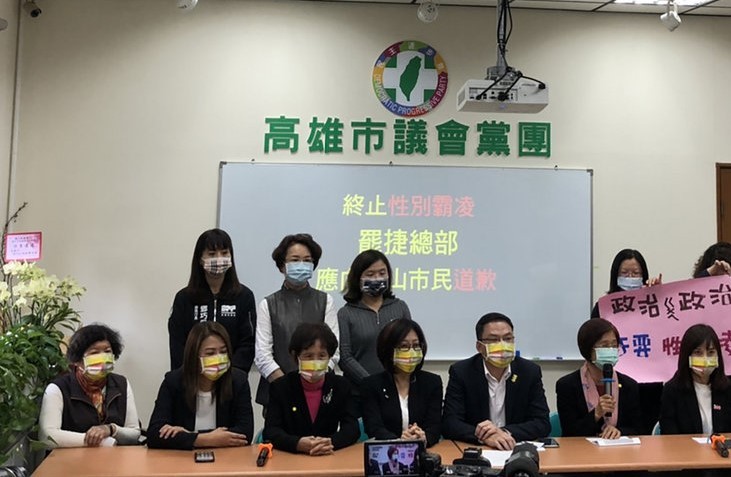 A poster displaying the word “b----” to describe Huang, an independent Kaohsiung city councilor, appeared on one of many vehicles during Sunday’s (Jan. 31) motorcade calling for the councilor’s recall. The recall campaign later clarified the vehicle displaying the vulgar message belonged to an anti-DPP group, adding that the DPP should look at all the “humiliating” content that appeared during the recall of former Kaohsiung Mayor Han Kuo-yu (韓國瑜).

Kaohsiung City Councilor Huang Wen-I (黃文益) said that people will respect democratic choice but that it is a farce to conduct attacks based on gender. He encouraged residents of Fengshan District to vote “no” in the recall election.

Zhuo Chun-ying (卓春英), a member of the Examination Yuan’s Gender Equality Committee, said that seeing verbally abusive posters was heartbreaking and that using derogatory words was both unwise and extremely off-putting.

Kao Min-lin (高閔琳), a member of the Kaohsiung City Council who is also facing a possible recall, said people must condemn the Huang Chie recall campaign and all those who discriminate against women. She also requested that the recall group apologize to Huang Chie and all women in Taiwan.

Kaohsiung City Councilor Kang Yu-cheng (康裕成) said that dismissal politician is a right supported by the constitution, but if the recall process is reduced to bullying and venting anger, it is “really regrettable.”