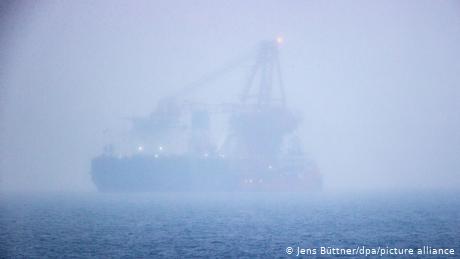 The endgame for a project worth billions is underway in the Baltic Sea. But the Nord Stream 2 gas pipeline has long since become a political hot potato.

Only 148 of the 1,230 kilometers (764 miles) are still to be completed. The huge snaking pipe on the seabed is the second phase of a project that has already been in operation for more than a decade. The pipeline is intended to carry even more Russian gas to Germany and on to Western Europe.

But resistance is growing. The project could still fail just a few months before its completion, especially as US President Joe Biden is just as keen to keep up sanctions imposed by his predecessor, Donald Trump. However, construction continues despite the political dispute.

The opponent: The US

Even before Biden's inauguration, it was clear that trans-Atlantic relations were to be given a fresh start: a return to old partnerships, multilateralism and international cooperation. But it won't be quite that simple, and there is agreement on both sides of the Atlantic on that, too. Even Biden knows that there is some truth to the boorish claims made by the now former president.

Germany's military spending is just one example. Nord Stream 2, which is unloved in Washington, is another. This became apparent during the Senate hearing of Anthony Blinken, the new US secretary of state. Blinken has a very different tone from his predecessor, Mike Pompeo, except when it comes to Russian gas supplies to Europe. He has vowed to use sanctions passed by the US Congress to stall the completion of the pipeline, if necessary. Biden too, it seems, is prepared to do everything in his power to prevent Nord Stream 2 from operating.

Behind this supposedly tough US stance are economic interests: Washington wants to promote the sale of US fracked gas to Europe, which will aid Biden's Buy American program to boost the domestic economy. At the same time, there is the foreign policy objective of not strengthening Russia's power. The new US administration's policies will likely align with its own interests, which is to maintain US dominance while not being as hostile as Trump.

Russian President Vladimir Putin, on the other hand, insists that Nord Stream 2 will be completed. At his annual news conference in December, he vowed: "Nord Stream 2 is without any doubt an absolutely beneficial project for the entire economy of Europe, including Germany."

Konstantin Kossachev, head of the Foreign Affairs Committee in the Federation Council —Russia's upper house of parliament — echoed those remarks earlier this month, saying "In our strategic planning, we assume that Germany has always considered this an economic and not a political project. We believe this position will be maintained."

Not everyone in Russia shares this opinion, however. Mikhail Krutikhin, a partner in the consulting firm RusEnergy, believes the project is long dead. In a radio interview earlier this month, he said: "This project already died in December 2019, when the US Congress passed a sanctions law."

And in mid-January, Gazprom, the Russian state-owned corporation involved in the construction, no longer ruled out the project's failure in a prospectus for the issuance of corporate bonds.

This caused quite a stir in Russia as Gazprom has firmly factored in Nord Stream 2 into its revenue projections. If the pipeline is delayed or shelved, the Russian energy giant will have to transport more of its gas through Ukraine, assuming that demand from Europe is unchanged.

In addition, Gazprom faces headwinds from other pipeline projects south of the Russian border.

Brussels insists that Nord Stream 2 is not a European project, but essentially a German matter. The European Union's foreign affairs envoy, Josep Borrell, said late last year that the future of the project was in German hands.

After tough negotiations, the EU had changed its gas directive so that it must now be applied to pipelines carrying gas from third countries to the EU. The decision means the Swiss-based Nord Stream 2 company must keep its pipeline and the sale of gas separate.

On the other hand, the European Parliament last week called for the scrapping of Nord Stream 2 by a large majority, saying that Russia's influence on the European energy market was becoming too great and that the Kremlin should be punished because of its human rights abuses.

Among EU member states, Germany, the Netherlands, Austria and France are in favor of pipeline construction. In Poland and Lithuania, on the other hand, are united in their opposition, because they foresee blackmail by Russia over energy supplies, citing rows between existing Russian gas transit countries such as Ukraine and Slovakia.

Although the European Commission is lukewarm, it stands firmly in favor of the project's operators when it comes to the US sanctions threat. It says that the penalties would violate international law and would prompt retaliation.

The German government considers the pipeline a positive step, but is always keen to emphasize that it is a "purely economic project." After the poisoning of Russian opposition activist Alexei Navalny last year, ministers faced strong pressure to scrap the project. Berlin, however, stuck to its guns: The Navalny case and the pipeline are two different things.

Environmental concerns have also been played down, with Economy Minister Peter Altmaier telling the business daily Handelsblatt that it is "problematic to threaten projects every few months that have been planned for decades," adding that "private investors will no longer be willing to commit."

The section of the pipeline in German waters is already finished.

How much gas is needed?

Gas reserves in Germany and Europe are currently plentiful, almost three months' supply is held in storage, according to energy experts Franziska Holz and Claudia Kemfert of the German Institute for Economic Research (DIW).

In a brief report for the Nature and Biodiversity Conservation Union of Germany (NABU), they insisted there is no ″coverage gap″ for gas in Germany. In other words, demand will not exceed supply in the short term.

Energy economist Marc Oliver Bettzüge concludes in an interview with the Frankfurter Allgemeine Zeitung that Nord Stream 2 is ″not of existential importance for the security and economic viability of gas supply in Germany or Europe." However, the gas price could fall ″perceptibly″ as a result of its completion, he added.

In the long run, energy experts agree that every additional source makes Germany more independent, especially as the country produces only a fraction of its own energy needs. Nord Stream 2 would also provide another gas corridor in the event of attacks on energy facilities.

Adversaries: Fossil fuels and the planet

″To meet climate protection targets, we need to completely phase out coal, oil and gas,″ said Niklas Höhne, a member of the Intergovernmental Panel on Climate Change (IPCC) and head of the NewClimate research institute in Cologne.

″That means we need less gas and less gas infrastructure overall in Germany, not more,″ Höhne told DW. With Nord Stream 2: "we would rely on more gas which would be counterproductive for climate protection."

Environment Minister Svenja Schulze (SPD) has nevertheless spoken out in favor of continued construction. After the phaseout of coal and nuclear power, natural gas is needed for a transition period, she said.

Höhne sees her assessment of gas as a bridging technology as outdated. ″We had 10 years to slowly phase out greenhouse gas emissions, but we have gambled away this time.″ A major problem of natural gas is its high greenhouse gas emissions. Natural gas consists mainly of methane and according to the IPCC, so it has had an effect 87 times worse than carbon dioxide over a 20-year period.

In addition, small amounts of methane are released during the extraction, transport and storage of natural gas. According to DIW's report, the carbon footprint of high leakage rates during extraction or transport is about the same as that of coal, if the entire life cycle of emissions is taken into account." In other words, gas is probably no less harmful than coal in the end.