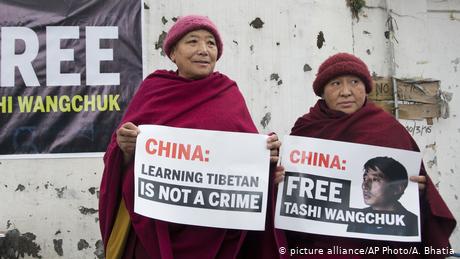 PEN America said Friday it was "overjoyed" that its lobbying for Tashi Wangchuk's release had borne fruit. However, a lawyer for the Tibetan language advocate said it was unclear whether he was "fully free."

Tashi had been escorted to his sister's family in Yushu in Qinghai, said lawyer Liang Xiaojun, referring to one of several large western Chinese provinces with large ethnic Tibetan populations, spanning the geological Tibetan Plateau.

Liang told the French news agency AFP on Friday, however, that his initial communications with Tashi had stalled, and he feared the language campaigner was still being subjected to official restrictions.

Tashi's release was also notified by the International Campaign for Tibet.

Chinese authorities detained Tashi in early 2016 after he had appeared in a New York Times (NYT) video and print reports about his Tibetan language advocacy.

His family was only informed several months later, and it was not until 2018 that he put through a one-day trial for "inciting separatism," which he denied, resulting in a 5-year jail term.

The nine-minute NYT video, in which Tashi slated China's erosion of Tibetan culture and language, was reportedly the sole evidence presented at the trial.

In the documentary run by the NYT, whose website is blocked in China, Tashi was described as a "shopkeeper" and spoke extensively in China's main language, Mandarin, describing what he termed as "pressure and fear'' felt byTibetans.

Last year, in an open letter, some 1,000 writers and linguists, with PEN at the forefront, called on China to release Tashi.

"We're overjoyed to learn that Tashi has been released from a prison sentence he should never have served in the first place," said Tager. "Speaking one's own language is no crime."

"We call upon Chinese authorities to lift all remaining restrictions on him and stop the criminalization of language defenders," said Tager.

Tashi's home province of Qinghai lies outside the Tibetan Autonomous Region (TAR), a vast area annexed by China in 1951 during a "peaceful liberation."

It has since asserted strict control and regards the exiled Dalai Lama as "splittist."

Tibetans face pressure to assimilate culturally and linguistically with China's Han majority while pledging loyalty to the ruling Communist Party.

US Consulate proposed for Lhasa

In December, both houses of the US Congress passed a Tibet Policy and Support Act (TPSA), proposing a US Consulate in Tibet's main city of Lhasa, the right of Tibetans to choose a Dalai Lama successor and environmental safeguards.

Many of Asia's rivers originate on the high-altitude plateau, which is sometimes called the world's Third Pole, because of itsice fields, including glaciers. Also of mounting interest is the plateau's role in global warming.