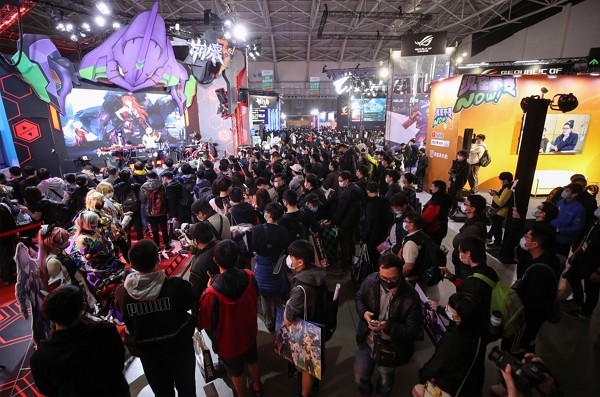 TAIPEI (Taiwan News) — The 2021 Taipei Game Show (TGS) has reduced the number of attendees it will allow due to concerns over a recent domestic cluster infection at Taoyuan General Hospital.

As the number of infections tied to the hospital cluster has risen, organizers of the event, which opened Thursday (Jan. 28) at Taipei Nangang Exhibition Center, have ramped up epidemic prevention measures to minimize the risk of coronavirus transmission. They said the venue, which has a maximum occupancy of 12,000 people, will be limited to no more than 7,000 attendees, and the number of exhibitors has been trimmed down from 900 to 500.

Speaking at the opening ceremony, Taipei Computer Association (TCA) Chairman Paul Peng (彭双浪) said the gaming industry has seen a large boost in sales during the pandemic. He noted that global videogame revenue was US$159.3 billion last year, a 9.3 percent increase from 2019.

Peng pointed out that the game show is featuring exhibitors from over 30 countries despite the last-minute withdrawal of Google Play and Komoe Game. It is taking place both in-person and online, with more than 100 new video games on display, he added.

Peng described the opening of the Taipei Game Show as "significant" and said the TCA will continue to promote the Taiwanese gaming industry to players around the world. He also thanked the government for its effective handling of the coronavirus outbreak, reported New Talk.

Meanwhile, Taipei Mayor Ko Wen-je (柯文哲) said it is relatively easy to manage the crowd at the game show since the venue only has one entrance. However, he warned that the showcase will be terminated immediately if the city reports any new domestic coronavirus cases in the next few days, according to the Liberty Times.