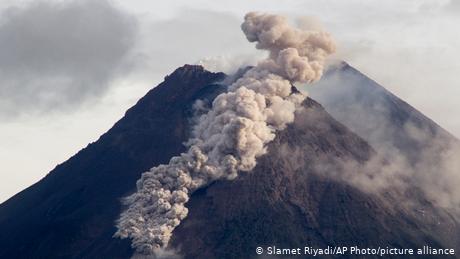 There were no reports of casualties, but the Development Center kept the alert system at its second-highest level.

The explosion happened just as residents had begun to return to their nearby homes on the island of Java after fleeing previous eruptions.

The resulting lava flow was the biggest since authorities raised the danger level in November, Hanik Humaida of the local Volcanology and Geological Hazard Mitigation Center said.

Some 2,000 local residents had fled their homes in the Sleman and Magelang districts near to the volcano after a series of eruptions, but had begun to return.

Local authorities said they were prepared to evacuate people again if necessary and told people to stay clear of the 5 kilometer (3 mile) danger zone around the crater.

"We are taking inventory of vehicles that will be used to transport villagers," the head of the local civil protection agency, Makwan, was quoted as saying by the Antara news agency.

"So far no ash rain has been observed in residential areas," he said.

The Indonesia islands lie on the Pacific "Ring of Fire", an area characterized by frequent earthquakes and volcanic eruptions.

The country has around 128 active volcanoes of which Mount Merapi is the most active.

The 2,968-meter high volcano has erupted repeatedly since 2018. Its most recent deadly eruption occurred in 2010 when it killed 340 people and left more than 60,000 displaced.