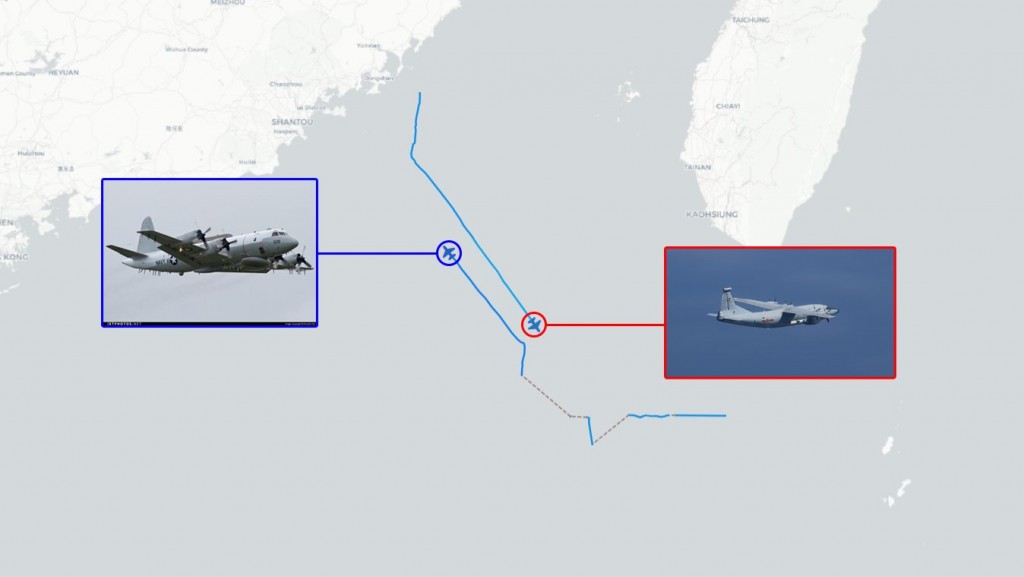 In what could be a new tactic by the Biden administration to deter the daily incursions by Chinese warplanes in Taiwan's ADIZ, aircraft spotters detected a USN Lockheed EP-3E ARIES II electronic warfare and reconnaissance aircraft flying on a nearly parallel path with a People's Liberation Army Air Force (PLAAF) Shaanxi Y-8G electronic aircraft.

At 9:36 a.m., Twitter user Ketagalan first detected the signal of a Y-8G with the registration number 30518 near Taiwan. By 10:16 a.m., Ketagalan reported the PLAAF plane was flying off the coast of Shantou, Guangdong Province.

Aircraft spotter CANUK78 at 10:05 a.m. reported that an EP-3E had been detected heading towards the South China Sea from the Bashi Channel, just off the coast of Taiwan's southernmost point of Eluanbi. CANUK78 added that a Boeing P-8A Poseidon appeared to be flying with the EP-3E.

Twitter user Indo-Pacific News at 10:59 a.m. reported that the EP-3E was headed towards the South China Sea with a P-8A. Indo-Pacific News then pointed out the aircraft carrier group led by the USS Theodore Roosevelt was operating nearby.

Aircraft enthusiast Aircraft Spots then reported at 11:04 a.m. that a USN EP-3E with the registration number 156528 and the PLAAF Y-8G "flew directly parallel to each other while operating over the South China Sea near Taiwan." The Chinese aircraft was taking the same flight path that other PLAAF planes have flown on nearly a daily basis in the southwest corner of Taiwan's ADIZ since mid-September of last year.

What was unusual about this incident was that a comparable U.S. military aircraft was flying in parallel with a Chinese plane at the same time and within a close distance. In previous incidents when Chinese warplanes had flown inside of Taiwan's ADIZ, U.S. military aircraft had at times also been inside or near Taiwan's ADIZ, but at an opposite end of the zone and never moving on a parallel path at such close range.

US Navy EP-3E 156528 and PLAAF Y-8G 30518 (both Electronic Intelligence ELINT aircraft) flew directly parallel to each other while operating over the South China Sea near Taiwan. pic.twitter.com/jhHyhgL0lM