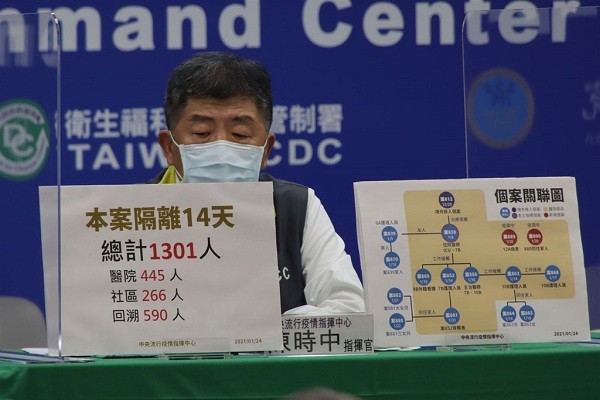 Taiwan on Sunday recorded two more domestic COVID-19 cases linked to a recent cluster infection at Taoyuan General Hospital, where the number of cases has now increased to 15, according to the Central Epidemic Command Center (CECC).

One of the new cases is a Taiwanese man in his 60s who stayed at the hospital from Jan. 8-11 due to health problems unrelated to COVID-19, said Minister of Health and Welfare Chen Shih-chung (陳時中), who heads the CECC, at a press conference in Taipei.

He developed a rash from Jan. 16-18, which improved after he saw a doctor, and then experienced chills and fatigue a few days later, Chen said.

He was only diagnosed with COVID-19 after he visited a doctor on Jan. 23 and was found to have a fever, Chen said.

A family member of the man, who lives with him, was confirmed with COVID-19 on Sunday, Chen said.

The two had not been tested previously for COVID-19 as they were not listed as contacts of the 13 other cases in the cluster. The CECC is still trying to identify how they became infected, Chen said.

The CECC is also investigating where the two cases had traveled to prior to testing positive, Chen said.

The doctors and patients who cared for the man, as well as other patients who stayed with him in the same ward, will be tested and put into quarantine, according to Chen.

A total of 1,301 people have been listed as contacts or potential contacts of the cases and are now in quarantine, Chen said.

Also on Sunday, Chen said that a COVID-19 case confirmed Saturday had visited the Chung Ping traditional market on Zhongzhou Street in Taoyuan on Jan. 19 and Jan. 20 before she tested positive for the disease.

Anyone who has been to the market and has developed symptoms of COVID-19 should notify the 1992 hotline and get tested, Chen said.

Besides the two domestic cases, Taiwan also recorded three new imported COVID-19 cases on Sunday, one from South Africa and two from the United States.

To date, Taiwan has recorded 889 cases of COVID-19, 779 of which have been classified as imported. Of that total, 787 patients have recovered, seven have died, and 95 remain in hospital, according to CECC data.

Globally, COVID-19 has infected over 98.6 million people in 193 countries and regions, with more than 2.1 million fatalities, according to CECC statistics as of Sunday.