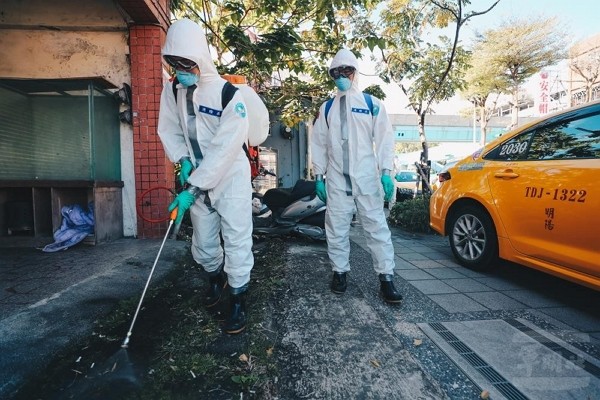 As a domestic cluster infection that began at Taoyuan General Hospital continues to grow, some people are urging the government to lock down Taoyuan to prevent community infections. During a press conference on Thursday, Chen said a citywide lockdown is not necessary at the moment and that it would be a last resort.

Chen explained that the Central Epidemic Command Center is operating under a system of four alert levels to manage the spread of coronavirus. He said the hospital cluster is still considered to be at the first level, which entails a small outbreak stemming from imported cases.

Alert level 2 would be issued if health officials cannot identify the source of a domestic infection, according to Chen. Additional preventative measures would be implemented in such a case, including banning indoor events of more than 100 people and outdoor gatherings of more than 500.

The restrictions set in motion by alert level 3 would stop just short of a lockdown and would take effect only when an area reports more than three community clusters in one week or over 10 domestic cases with unknown sources of infection. Under such conditions, people would be asked to wear masks once they leave home. Schools and all non-essential businesses would be closed, and indoor gatherings of more than five people and outdoor gatherings of more than 10 would be suspended.

The final alert level would be issued if the 14-day rolling average of coronavirus cases for a single area exceeds 100 and the sources of infection for over half cannot be identified.

At this alert level, a full lockdown would be implemented, and people in the targeted area would not be allowed to leave their residences without permission. All schools and companies in the area would also be closed.

Chen emphasized that the public should not panic but that people should maintain social distancing and hygienic practices. He also urged Taiwanese to avoid partaking in witch hunts, which he described as detrimental to society, reported CNA.

Since two medical workers at Taoyuan General Hospital were tested positive for coronavirus on Jan. 11, the number of infections tied to the hospital cluster has increased to 12. The confirmed cases include two doctors, four nurses, a Vietnamese caregiver, one hospital patient, and four family members of the infected.