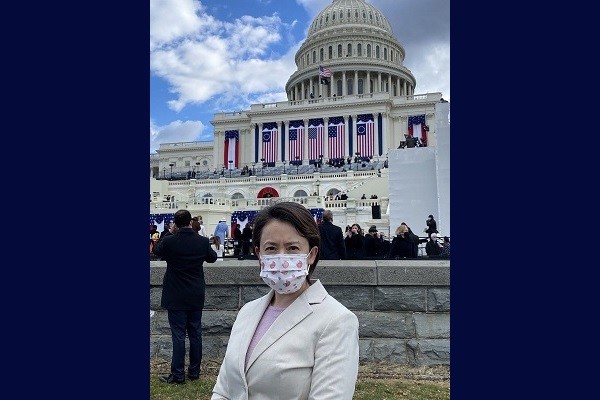 TAIPEI (Taiwan News) — Taiwan was represented in an official capacity at the U.S. presidential inauguration on Wednesday (Jan. 20) for the first time since the U.S. severed diplomatic ties over 40 years ago.

On Wednesday, Taiwan’s envoy to the U.S., Hsiao Bi-khim (蕭美琴), attended the inauguration of President Joe Biden on the West Front of the Capitol building. At 11 a.m., just before Biden took the oath of office, Hsiao posted a tweet in which she stated it was an honor to represent Taiwan at the inauguration ceremony for President Biden and Vice President Harris.

In a video she uploaded in the tweet, Hsiao said: "I'm honored to be here today on behalf of the people and government of Taiwan at the inauguration of the United States President Biden and Vice President Harris. She added that "Democracy is our common language and freedom is our common objective. I look forward to working with the next administration in advancing our mutual values and interests."

Hsiao's presence is historic, as it is the first time a representative of the Taiwanese government has been officially invited by the inauguration organizing committee since President Jimmy Carter cut off diplomatic relations with Taiwan in 1979. Since the 1980s, Taiwan's representatives could only attend if they were handed admission tickets by individual members of Congress.

The epidemic prevention rules enforced amid the Wuhan coronavirus pandemic may have facilitated Hsiao's breakthrough participation. This year, legislators were not given a large number of admission tickets, instead only being allowed to take their spouse or other relatives and friends.

Initially, it appeared that Taiwan would not have a presence, with the Ministry of Foreign Affairs (MOFA) stating publicly that it would be difficult for the country to be represented at this year's inauguration given the restrictions placed on participation. However, on Wednesday, MOFA issued a press release stating that Hsiao had accepted an official invitation from the Joint Congressional Committee on Inaugural Ceremonies to attend the inauguration of Biden and Harris on behalf of the Taiwanese government.

The ministry acknowledged that this was the first time in decades a Taiwanese representative had officially been invited to a presidential inauguration, "demonstrating the close and friendly relationship between Taiwan and the United States based on shared values." The ministry pledged that in the future, the government will continue to promote exchanges and cooperation at all levels and in various fields with the Biden administration "on the existing good foundation, and further deepen the Taiwan-US partnership."

Honored to represent the people and government of Taiwan here at the inauguration of President Biden and Vice President Harris. pic.twitter.com/KSatj8vIln