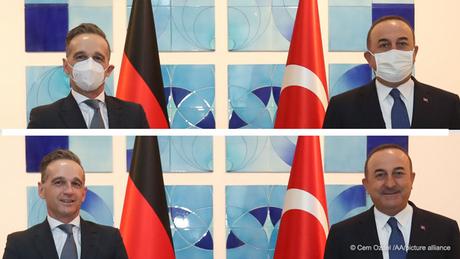 Both DW's German and Turkish departments reported on the recent trip by Foreign Minister Heiko Maas to Turkey. In one photo published by DW, Maas and his Turkish counterpart, Mevlut Cavusoglu, were wearing masks to prevent the spread of the coronavirus; in another photo, they weren't. Because they were standing against an identical background and their posture was the same, there was speculation online that the images had been manipulated. The truth was that they were different photos — taken at different moments by different editorial teams at the same event.

It has become common practice for politicians to briefly remove their masks just before making statements — provided that social distancing guidelines are observed and proper ventilation is maintained.

Alexandra von Nahmen, the head of DW's Brussels studio, said that had been her experience, though most press conferences take place virtually nowadays. When in-person events do take place, she said, everyone adheres to guidelines for masking and social distancing. "When Ursula von der Leyen has a statement to give, or questions to answer, she only takes her mask off when she's directly in front of the microphone, when she starts to speak," she said, using the president of the European Commission as an example. "The press team makes sure that all of the rules are adhered to here."

Visual journalists do not tell politicians whether to wear masks or not, said Peer Grimm, the head of the photo department at DPA, the German press agency. Editors also do not require photojournalists to return from assignments with pictures of politicians not wearing masks. "We as agency journalists try to reflect reality," Grimm said. "When is a politician wearing a mask and when is a politician not wearing a mask? We're only trying to show what's happening." He said there was no particular type of image that performed better with clients, either. "It depends strongly on the context in which the picture was taken," he said. "For example, months ago, when Health Minister Jens Spahn continued to wear his mask incorrectly, that, of course, was newsworthy. In that case, our customers, for the most part, wanted those photos."

"Keep distance," von der Leyen told Johnson before they took their masks off for photographs. "We have to put it back on," she said.

"We have to put it back on immediately?" Johnson asked.

"We have to put it back on," von der Leyen said.

"You run a tight ship, Ursula," Johnson said as they pulled their masks back on. "Quite right, too."

This article has been adapted from German.