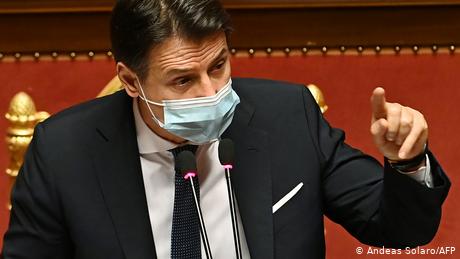 Italian Prime Minister Giuseppe Conte survived a vote of confidence Tuesday but failed to secure an overall majority in parliament, leaving his ruling coalition more fragile than ever.

The government has been teetering on the brink of collapse since former premier Matteo Renzi withdrew his Italia Viva party last week, depriving Conte of his majority in the Senate.

Weeks of tensions over the government's handling of the coronavirus pandemic came to a head with a late-night vote of confidence in the upper chamber.

Conte won by 156 votes to 140, but only after almost all Italia Viva's senators abstained. Perhaps even more crucially, the result fell short of the 161 needed for an overall majority.

The Italian PM was quick to turn his attention to the challenges that lie ahead. "Italy doesn't have a minute to lose," he tweeted. "Immediately to work to overcome the health emergency and the economic crisis. Priority to vaccine plan and recovery plan."

Leading a minority government could make it difficult for Conte to pass crucial legislation. It also leaves him vulnerable to future parliamentary ambushes, especially as Italy fights to contain one of the world's worst coronavirus outbreaks.

Over the coming weeks, Conte and his supporters will likely try to persuade a few defect Christian Democrat, conservative and socialist lawmakers, as well as former 5-Star Movement (M5S) members and defectors from former prime minister Renzi's side, to join them.

The Senate cast their ballots a day after Conte survived a confidence vote in the country's lower house on Monday, where he and his government won the vote by 321 to 259 — a margin that was wider than expected.

Conte had appealed to pro-European lawmakers to support his fragile government or risk handing power to the nationalist right. His coalition has been on the brink since Renzi withdrew the support of his Italia Viva (Italy Alive) party last week, depriving Conte of his majority in the Senate.

Renzi, who quit the government citing disagreement over Conte's handling of the twin coronavirus and economic crises, had said his party would "probably" abstain in Tuesday's vote — as it did on Monday. His party's vote against Conte would have made the chances of the Italian PM's survival even less likely.

Conte was tapped by Italy's 5-Star Movement to lead the government after the 2018 general election resulted in a coalition of the M5S and Matteo Salvini's right-wing League party. In August 2019, the League submitted a motion of no confidence against Conte's coalition government. Conte had offered to step down as prime minister but the M5S and the PD agreed to form a new government with Conte staying on as leader.

Conte faces an unprecedented challenge to revive a ravaged economy, with parts of Italy currently under partial COVID-19 lockdown. He also needs to push a €220 billion ($196 billion) European Union recovery package through parliament.